H. Complete the notice given below by using suitable prepositions from the box. The first one has been done for you.

I. Given below is a passage with blanks. Fill in each blank with appropriate prepositions.

J. Fill in the blanks with suitable prepositions. The first one has been done for you as an example.

K. Given below is a passage. There is a preposition missing in each line where a’s has been marked. Write the missing preposition in the space provided. The first one has been done as an example.

Fundamentals
Compound prepositions are made up of two or more words. according to, as of, aside from, because of, by means of, in addition to, in front of, in place of, in spite of, instead of, on account of, out of, owing to, prior to, due to are some compound prepositions.

Out of five toys, Sarita prefers to buy a teddy bear for her daughter. She asks for the opinion of her daughter because she wants her to be happy. 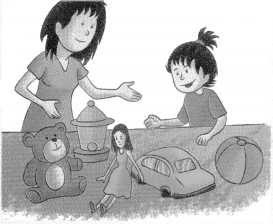 She keeps all the five toys in front of her daughter and allows her to choose one of them. Her daughter chooses a Barbie doll instead of a teddy bear. 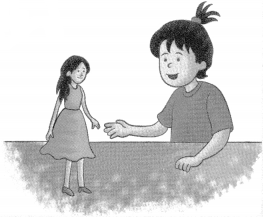 On account of her daughter’s opinion, Sarita decides to buy a Barbie doll in addition to a teddy bear. Sarita’s daughter becomes very happy after getting both the toys. 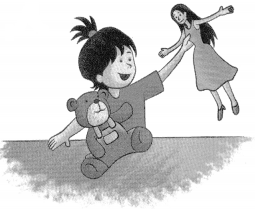 B. Fill in the blanks with suitable compound prepositions given in the box. The first one has been done for you.

A. Fill in the blanks with suitable compound prepositions given in the box.
behalf, next, with, to, out, top