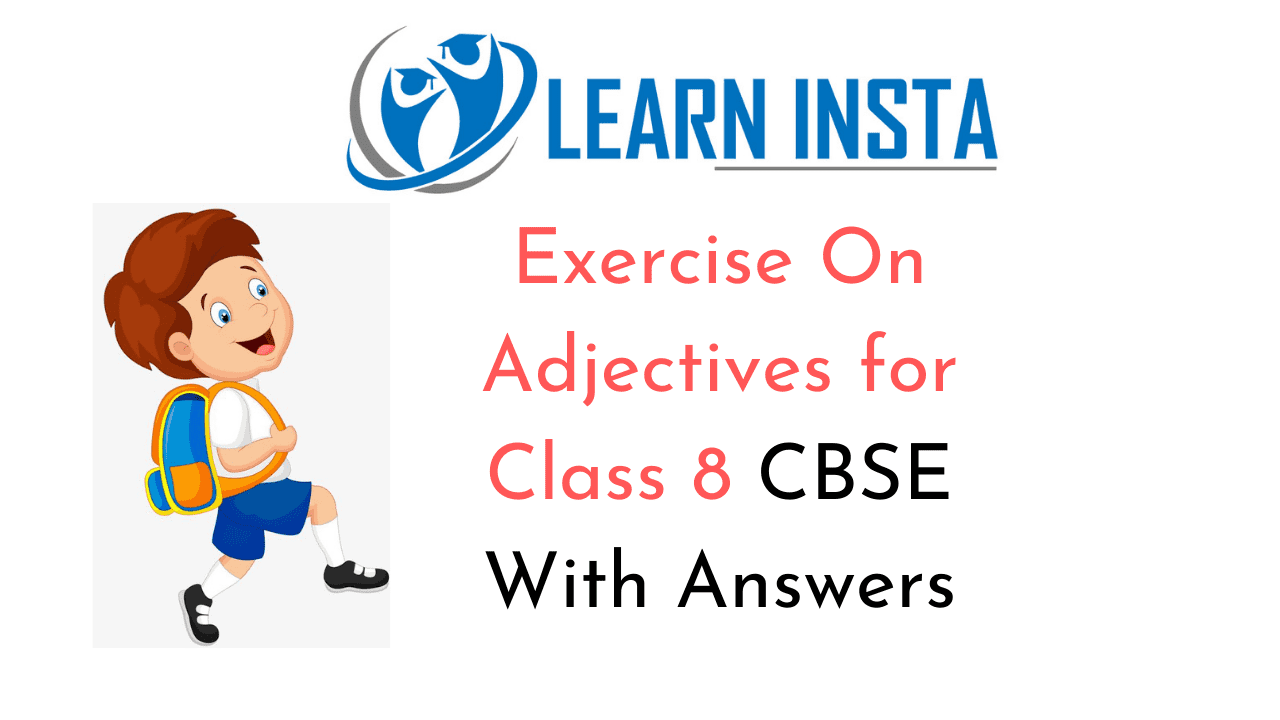 The adjective is a word used to describe, identify, or quantify a noun or a pronoun. It gives more information about the object signified.
For example:

Note: Brave – is an adjective used to describe the type of boy ‘he’ is.

Exercise On Adjectives for Class 8 CBSE With Answers Pdf

There are Five types of Adjectives: 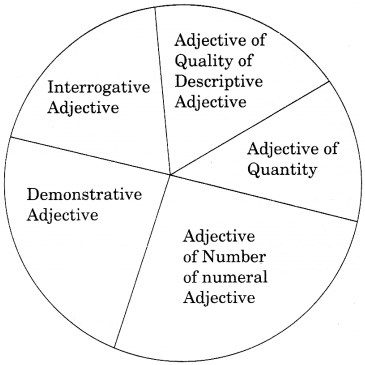 1. Descriptive Adjectives: The most common type of adjective is the descriptive adjective. These are simply words that help of describe nouns. They can be colours, sizes, or other describing words.

2. Possessive Adjectives: Possessive adjectives are like possessive pronouns, but act as adjectives. They are: my, your, its, our and their. Remember: It’s an adjective if it comes with the noun; it’s a pronoun if it replaces the noun.

Don’t do it! Even though we might write “The dog’s bone, “we do not subsequently refer to “It’s bone.” “It’s” is a contraction meaning “It is”; “Its” is a possessive pronoun. A similar mistake is using “who’s” for “whose”. Sometimes people also throw an apostrophe into “hers” or “theirs” and write “hers” or “their’s”.

It is my ball
We are going to her home.
I am playing his computer game.
Can I pet your dog?
We love our new car.

We also use possessive adjectives when we talk about an action that serves as the subject of a sentence. For example: Our selling the house was the result off the bad company.

This means the same as: The bad economy forced us to sell the house. However, this is often incorrectly written as “Us selling the house…”.

Take this job and shove it.,
I love that new dress.
Who are those people?
I don’t know what investment you made.

Formation of Adjectives
We can form adjectives from nouns by adding various suffixes.

Question 2.
Identify the adjectives from each of the following sentences and tell which nouns/ pronouns te: they are describing.
(i) You have a bright future ahead.
(ii) Japanese is not an easy language.
(iii) Life is very beautiful.
(iv) The old woman sits in the Sun.
(v) Badminton is a nice game.
Answer:
Adjective – Noun
(i) bright – future
(ii) easy – language (Japanese)
(iii) beautiful – life
(iv) old – woman
(v) nice – game

Question 3.
Formation of Adjectives
Form adjectives from these nouns and complete the table.

Question 4.
Correct the following sentences:
(i) It house belongs to my brother.
(ii) Yours neighbour is well behaved.
(iii) That is own your house.
(iv) A good number of milk was spilt.
(v) My all mistakes were corrected.
(vi) I have seen fine a picture.
(vii) He bought red four toys.
(viii) When I reached there, he asleep was found.
(ix) Many a good students failed.
(x) Remarkable nothing was there.
(xi) She ashamed felt for her temperament.
(xii) The all members were sleeping.
(xiii) The Greater Sikander invaded India.
(xiv) The both pictures are beautiful.
(xv) The two last questions were left.
(xvi) The two first chapters are out of course.
(xvii) A monkey red-faced saw me.
(xviii) An accident dangerous took place.
(xix) White and red and green colours are to be avoided.
(xx) Hanuman is an Incarnate god.
Answer:
Hint only.
(i) this house
(ii) your neighbour
(iii) your own house.
(iv) A good deal of
(v) all my
(vi) a fine
(vii) four red
(viii) found asleep
(ix) a good many or many a good student
(x) nothing remarkable
(xi) felt ashamed
(xii) all the
(xiii) Sikander, the great
(xiv) both the
(xv) the last two
(xvi) the first two
(xvii) a red-faced monkey
(xviii) dangerous accident
(xix) White, red and green
(xx) a god Incarnate

Question 1.
Find the tick mark (✓) the appropriate adjective in the following sentence:
(i) I have (any/some) good news for you.
(ii) The department order says that no one will leave the station till (further/farther) order.
(iii) Rakesh is a writer of (many/much) repute.
(iv) The (latter/later) half of this film is like Ekta Kapoor’s serial.
(v) (Each/Every) person wants quick gain.
(vi) Hari is my (older/elder) brother.
(vii) (All/whole) electronic media go for sensational stories.
(viii) Have you read (any/some) novel of Anton Chekhov?
(ix) The minister has (little/a little) time for this programme.
(x) (A few/few) members were present in the meeting.

Question 2.
Correct the following sentences by finding and underlining errors:
(i) I have much works to complete.
(ii) Sheetal is most intelligent than Kajal.
(iii) I gave her ten hundreds rupees notes.
(iv) I stayed in Researcher’s hostel for few days.
(v) Is there some water in the bottle?
(vi) She has no any money.
(vii) Brave prefers death than dishonour.
(viii) Many a naxals were killed in the operation.
(ix) You have time to catch the latest train.
(x) Give me little salt please.
(xi) My class students help each other.
(xii) Garima talked first to mine.
(xiii) I will take the latter/last train.
(xiv) What room do you want?
(xv) He will visit you nearest day.
(xvi) She becomes more cleverer.

Question 4.
Form adjectives from these verbs and complete the table.

Question 5.
Use the adjectives from the box to replace the underlined phrases and rewrite these sentences. Change the order of the words in the sentences if required.

Rules of using Degrees of comparison 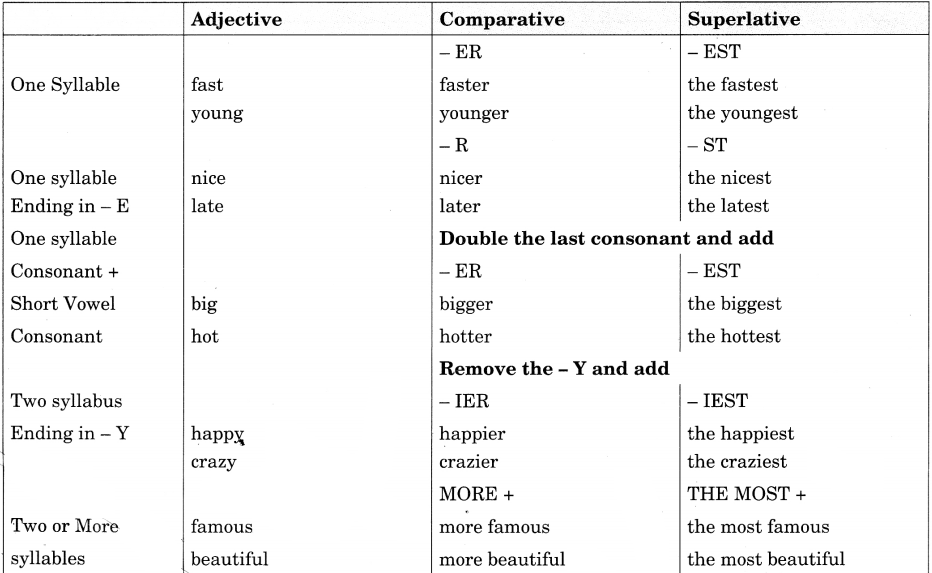 Question 2.
Point out the Adjective and name the Degree of comparison of each.
(i) The poor woman had seen happier days.
(ii) Do not talk such nonsense.
(iii) Make less noice.
(iv) That child has a slight cold.
(v) A live ass is stronger than a dead lion.
(vi) Say the same thing twice over.
(vii) Solomon was one of the wisest men.
(viii) Hunger is the best sauce.
(ix) His simple word is as good as an oath.
(x) There was not the slightest excuse for it.