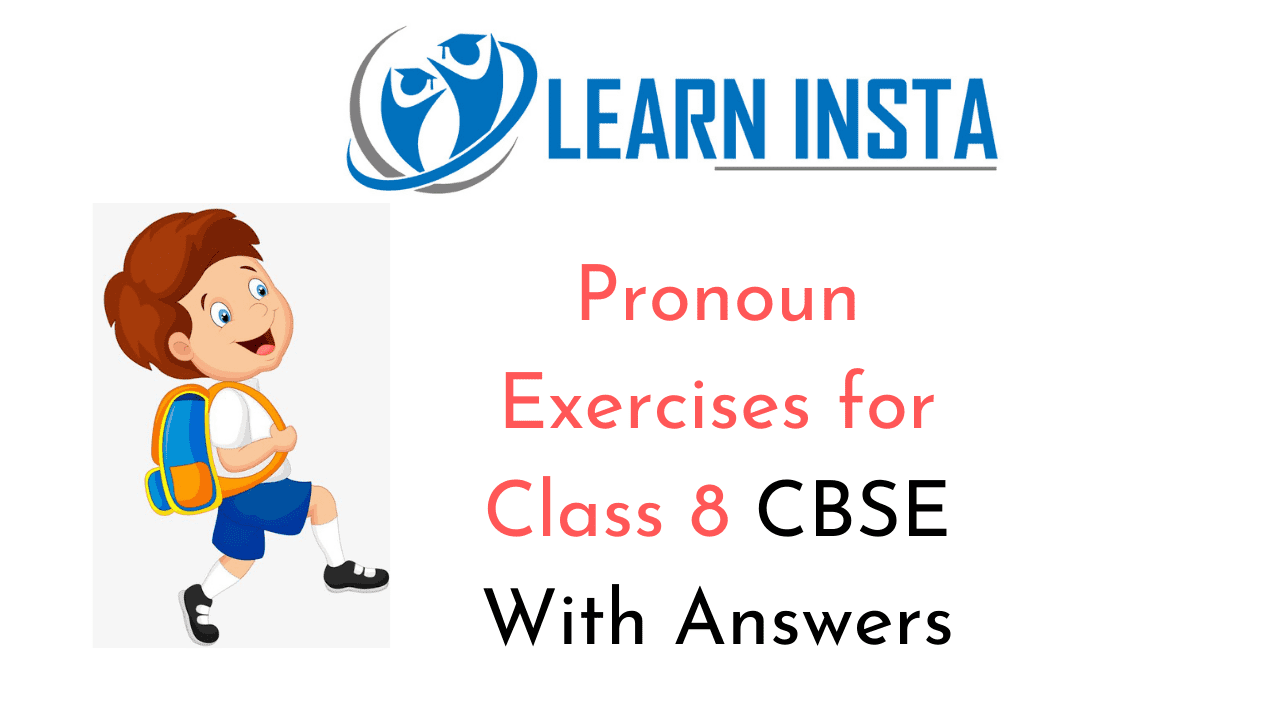 A pronoun is a word that takes the place of a common noun or a proper noun. There are different kinds of pronouns.

A pronoun is a word which is used in place of noun. They are used to make sentences less cumbersome and less repetitive. Like a noun, a pronoun can be singular or plural and refer to people as well as things. Examples: he, she, it, they, we etc. 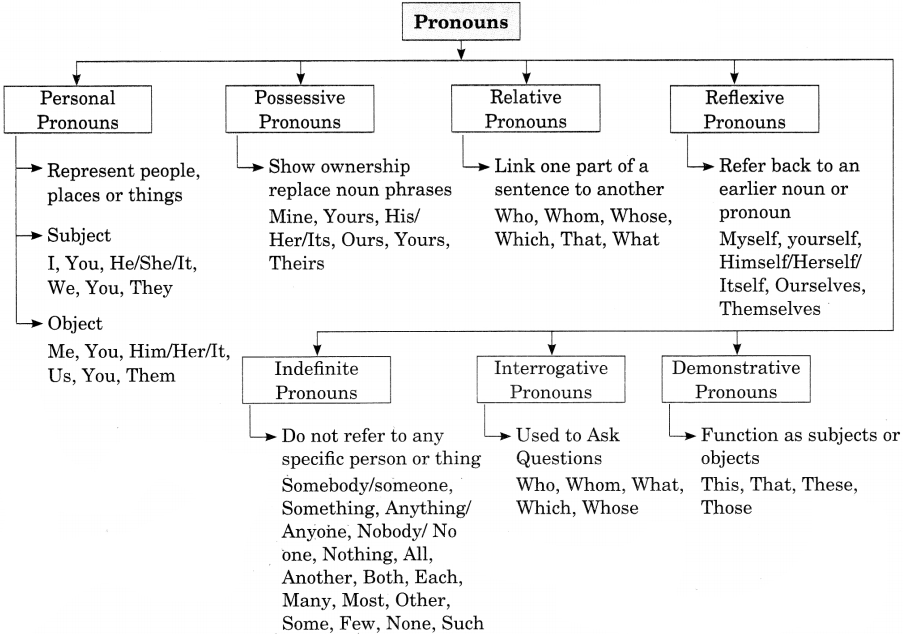 Pronoun Rules
There are a few important rules for using pronouns. As you read through these rules and the examples in the next section, Noticehow the pronoun rules are followed. Soon you’ll see that pronouns are easy to work with.

Who is attending the conference on Friday?
Who has made these beautiful paintings?
Whom are you writing to?
Of whom are you speaking?
What is the colour of a flamingo?
Which of these books do you want?
Which is your favourite city?
I have found a pen. Whose is it?

Reflexive Pronouns
We use reflexive pronouns when the subject and the object of a sentence or a clause is the same.

The reflexive pronouns end in -self (singular)
or -selves (plural). I saw myself in the mirror.
Why do you blame yourself? The cat licked itself clean.
Jaya sent herself a copy of the email.
The candidate gave a glowing account of himself.
We can take care of ourselves.
I cannot believe you did all the work yourselves.
The children gave themselves a round of applause.

Emphatic pronouns
Emphatic pronouns have the same form as reflexive pronouns but they do not function as the object of a sentence or a clause. Instead they are used to emphasise the subject.

I made the dolls’ house myself.
Did you read the document yourself?
The locality wasn’t bad but the house itself was awful.
He recommended the book though he hadn’t read it himself.
She spoke to me herself. (Or, she herself spoke to me.)
We did all the works ourselves.
You yourselves wanted to attend the programme.
The organisation themselves offered to help the refugees.

Relative Pronouns
A relative pronoun introduces a relative (or adjective) clause. It refers back to the subject in the main clause.

The relative pronoun are who, whom, that, which, whoever, whomever.
The person who called me last evening is your teacher.
The lady whom you were talking to is the CEO of my company.
The boy whose arm is broken is my friend.
The building that the corporation wants to demolish is not occupied.
The police inspected the car which had been smashed in the accident.
Please deliver to parcel to whoever is at home.
Whomever he met, he made friends with.

Indefinite Pronouns
An indefinite pronoun does not refer to any specific person, animal or thing.

Some commonly used indefinite pronouns are another, any, one, none, anybody/anyone, everybody, everyone, nobody/ no one, somebody/someone, anything, everything, nothing, something, both, some, many and others are used as plural indefinite pronouns.

Indefinite pronouns are usually singular.
A singular indefinite pronoun takes a singular verb, and any personal pronoun used in the sentence to refer the indefinite pronoun must agree with it in number.
Nobody came to see our play. It was rather sad.
She looked in the container for some flour, but there was none.
Everybody is going home for the holidays except me.
The thieves took everything in the electronics shop.

Distributive Pronouns
Distributive pronouns refer to persons or things individually in a pair or in a group.

Each refer to individuals in a group:
Either and neither refer to individuals in a pair.
A distributive pronoun is always singular and should be followed by a singular noun and verb.
There mere fifty participants. Each was given a certificate.
They are professional tennis players. Each has his own trainer.
Tina and you have won the award jointly.
Either can accept the award.

Question 2.
Complete the crossword below. 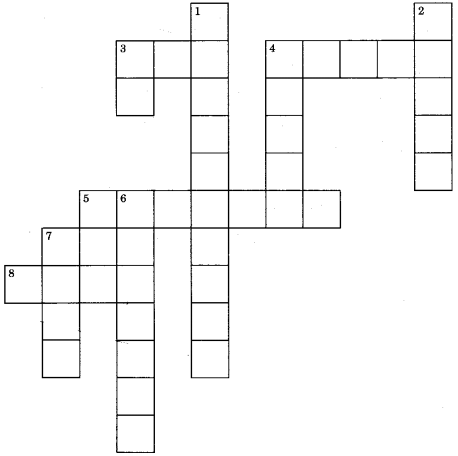 Question 1.
Fill in the blanks with appropriate personal pronouns to complete the passage.
Every afternoon, as ___________ were coming from school, the children used to go and play in the Giant’s garden.

___________ were coming Iron was a large lovely garden, with soft green grass. Here and there over the grass stood beautiful flowers like stars, and there were twelve peach-trees that in the spring-time broke out into dedicate blossoms of pink and in the autumn bore rich fruit. The birds sat on the trees and sang so sweetly that the children used to stop their games in order to listen to ___________ are here!” ___________ cried to each other.

Question 2.
Identify the type of pronoun
(i) We are going on vacation.
(ii) Don’t tell me that you can’t go with us.
(iii) Anybody who says it won’t be fun has no clue what they are talking about.
(iv) These are terribly steep stairs.
(v) We ran into each other at the mall.
(vi) I’m not sure which is worse: rain or snow.
(vii) It is one of the nicest Italian restaurants in town.
(viii) Richard stared at himself in the mirror.
(ix) The laundry isn’t going to do itself.
(x) Someone spilled orange juice all over the countertop!