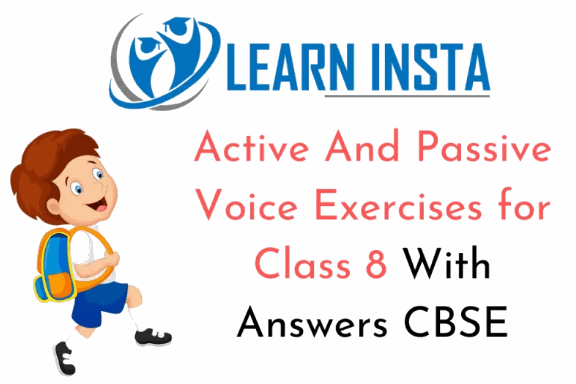 When to use Active Voice:
When the focus is on an agent, the sentence is used in active mode.

This grammar section explains English Grammar in a clear and simple way. There are example sentences to show how the language is used. You can also visit the most accurate and elaborate NCERT Solutions for Class 8 English. Every question of the textbook has been answered here.

‘Voice’ is a grammatical category that applies to sentences. Voice in English expresses the relationship of the subject to the action.

The active voice is the ‘normal’ voice – the one that we use most of the time. In the active voice, the object receives the action stated by the verb.

In active voice, the subject is the person or thing responsible for the action described by the verb.

All tenses are possible in the active voice, as well as all sentence types, positive, negative or interrogative.

The active voice is:

Except on occasions when passive voice is more useful, active voice is the voice of choice.

Passive Voice
Mice are eaten by cats:
Although passive voice is less common than active voice, there are several good reasons to sometimes use passive voice. On the next page we look at how to construct sentences in passive voice and when and why to use it.

How do we make a sentence in passive voice?
The basic structure of a passive clause is very simple:

The auxiliary be is conjugated in all tenses. The main verb is always the past participle. The agent is the original “doer” of the action.

Look at some examples.

Agentless passive
The subject of an active sentence ‘does’ the action. In a passive sentence, we express the doer (or agent) through a ‘by’ phrase (the long passive) or, very often, we remove the agent completely (the short passive). In the following example, the agent is ‘the Allies’:

The short passive is also known as the “agentless passive”. Soon you will see how useful it can be.

1. We want to emphasise the receiver of the action.

3. We think the agent is not important or interesting:

4. The agent is obvious.

5. We are making general statements or announcements.

6. The agent is everyone.

7. When writing formal or scientific texts.

8. We want to avoid responsibility for our own actions (typically found in government reports):

Look at this sentence.

The get-passive
Although we normally construct the passive with be + past participle, it is also possible (in informal language) to use get + past participle. So if France beat England at football, we could turn this to passive and say “England were beaten by France” (de-passive) or “England got beaten by France” {get-passive). And we might also add: “But France will get thrashed by Russia.”

For formal English and exams you should use the be-passive, but in informal language people sometimes use the gef-passive.

Forms of passive
The passive voice is not a tense itself. But for transitive verbs each tense, as well as other verb forms such as infinitives and participles, can be produced in the passive voice. Some of the more complicated tenses (mostly perfect continuous) are rarely used in the passive, but they are possible.

Here are some examples of passive voice with many of the possible forms using the verb sing:

Active and Passive Examples
The table below shows example of sentences in active and passive voice for the basic tenses as well as various other verb forms, including infinitives and participles.

To make passive voice, we use the following rules.

1. Change the object into subject. If as an object, we have a pronoun than we convert it as follows:

2. Change the subject into object. And use ‘by’ before the object. If as a subject, we have a pronoun of nominative then we convert it as follows:

An imperative sentence is changed from active to passive voice according to the message contained in the sentence. For this purpose words used are as follows: 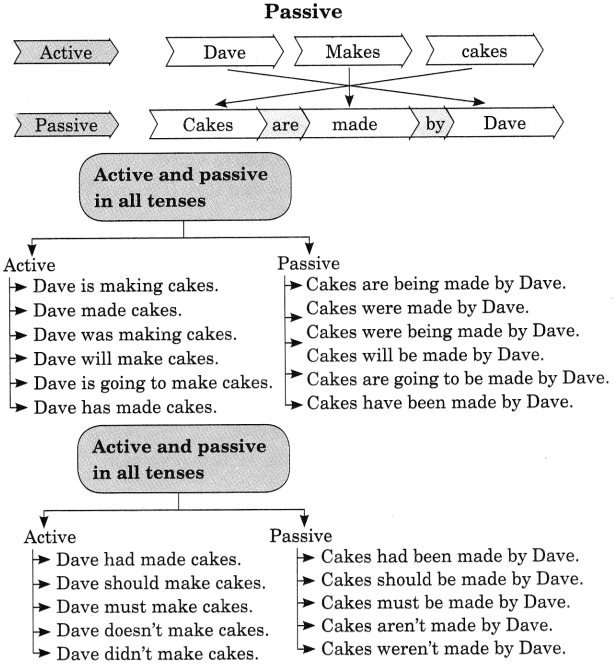 Question 2,
Change the voice.
(i) Ms. Sullivan teaches us grammar.
(ii) The teacher praised him.
(iii) The firemen took the injured to the hospital.
(iv) An earthquake destroyed the town.
(v) The boy’s work pleased the teacher.
(vi) The fire damaged the building.
(vii) Who taught you French?
(viii) The manager will give you a ticket.
(ix) Spectators thronged the streets.
(x) Everyone will blame us.
(xi) The wind blew down the trees.
(xii) The police caught the thieves.
(xiii) Alice posted the letter.
(xiv) The hostess received us.
(XV) They/somebody killed the snake with a stick.
(xvi) The people welcomed the minister.
(xvii) They found him guilty of murder.
(xviii) John Mathews built this house in 1991.
Answer:
(i) We are taught grammar by Ms Sullivan.
(ii) He was praised by the teacher.
(iii) The injured were taken to the hospital by the fireman.
(iv) The town was destroyed by an earthquake.
(v) The teacher was pleased with the boy’s work.
(vi) The building was damaged by the fire.
(vii) By whom were you taught French?
(viii) You will be given a ticket by the manager.
(ix) The streets were thronged with spectators.
(x) We will be blamed by everyone.
(xi) The trees were blown down by the wind.
(xii) The thieves were caught by the police.
(xiii) The letter was posted by Alice.
(xiv) We were received by the hostess.
(xv) The snake was killed with a stick.
(xvi) The minister was welcomed by the people.
(xvii) He was found guilty of murder. See
(xviii) This house was built by John Mathews in 1991.

Question 2.
Fill in the blanks using the most suitable passive form of the verbs given in brackets. The first one has been done for you.

Question 3.
Change the following sentences into passive voice. The first one has been done for you.

1. I am sure they will take care of the child properly
I am sure that the child will be taken care of properly.