Question 1.
A cell, a resistor, a key and ammeter are arranged as shown in the circuit diagrams of the figure given below. The current recorded in the ammeter will be

(a) maximum in (i)
(b) maximum in (ii)
(c) maximum in (iii)
(d) the same in all the cases.
Answer:
(d).
Explanation : Same current flows through every part of the circuit having resistance connected in series to a cell or battery.

Question 2.
In the following circuits shown in figure, power produced in the resistor or combination of resistors connected to a 12V battery will be 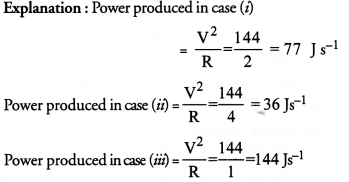 Question 5.
Identify the circuit (Figure) in which electrical components have been properly connected. 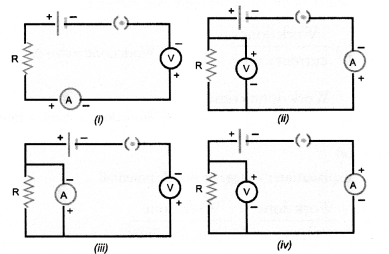 Question 7.
What is the minimum resistance which can be made using 1 five resistors each of 1/5 Ω ?

Question 8.
The proper representation of series combination of cells obtaining maximum potential is

Question 9.
Which of the following represents voltage ? 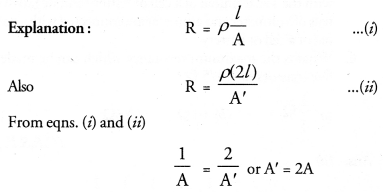 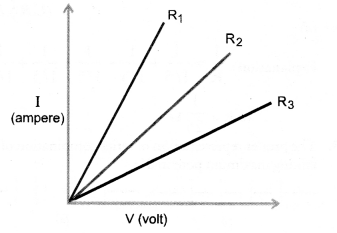 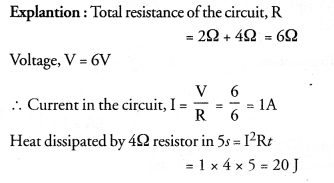 Question 19.
A child has drawn the electric circuit to study Ohm’s law as shown in figure. His teacher told that the circuit diagram needs correction. Study the circuit and redraw it after making all corrections. 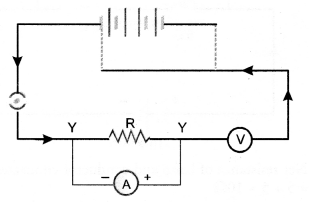 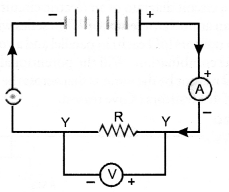 Question 20.
Three 20 resistors, A, B and C are connected as shown in figure. Each of them dissipates energy that can withstand a maximum power of 18W without melting. Find the maximum current that can flow through three resistors.
(CBSE, 2010) 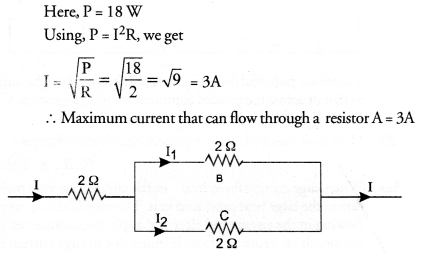 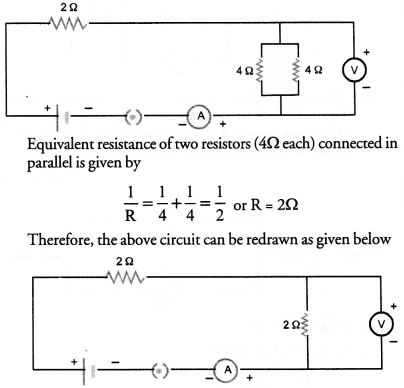 Therefore, potential difference across 2Ω resistor will be same ; as that of across the parallel combination of 4Ω resistors. V = IR.
As R and I in both the cases is same so V = same.

Question 24.
In a series electrical circuit comprising a resistor made up of a metallic wire, the ammeter reads 5A. The reading of ammeter decreases to half when the length of the wire is doubled. Why ?
Answer: 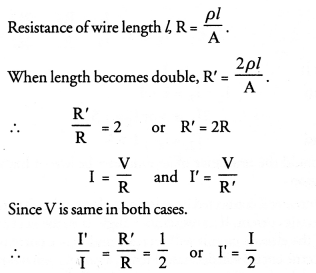 Question 26.
A current of 1 ampere flows in a series circuit containing an electric lamp and a conductor of 5Ω when connected to a 10V battery. Calculate the resistance of the electric lamp.
Now if a resistance of 10Ω is connected in parallel with this series combination, what change (if any) in current flowing through 5Ω condcutor and potentional difference across the lamp will take place ? Give reason. Draw circuit diagram.
(CBSE 2010)
Answer: 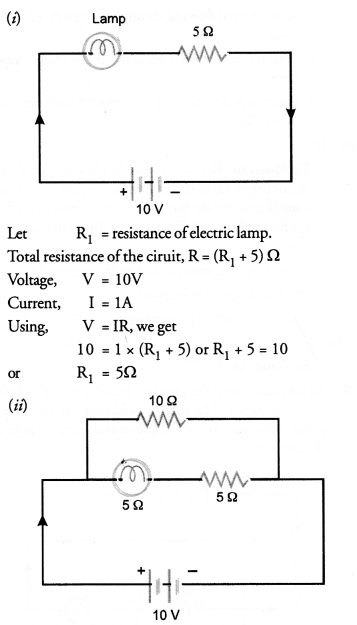 Question 28.
B1, B2 and B3 are three identical bulbs connected as shown in figure. When all the three bulbs glow, a current of 3A is recorded by the ammeter A.

Question 29.
Three incandescent bulbs of 100W each are connected in series in an electric circuit. In another circuit, another set of three bulbs of the same voltage are connected in parallel to the same source.
(a) Will the bulb in the two circuits glow with the same brightness ? Justify your answer.
(b) Now let one bulb in both the circuits get fused. Will the rest of the bulbs continue to glow in each circuit ? Give reason.
(CBSE 2012)
Answer:
(a) Power dissipated in a circuit = V2/R. Since resistance of the circuit containing bulbs connected in series is more than the resistnace of the circuit containing bulbs in parallel, therefore, power dissipated in parallel combination is more than that in series combination. Hence, bulbs connected in parallel will glow more brightly.
(b) In series combination, there is only one path for the flow of current. So when one bulb gets fused, circuit is broken and hence the bulbs stop glowing.
In parallel combination, each bulb has its own path for the flow of current. So when one bulb gets fused, other bulbs will continue to glow as the current is flowing in the circuits of these bulbs.

Question 30.
State Ohms law. How can it be verified experimentally ? Does it hold good under all conditions ? Comment.
(CBSE 2010)
Answer:
For Ohm’s law: Ohm’s law states that the electric current flowing through a conductor is directly proportional to the potential difference across the ends of the conductor, provided the temperature and . other physical conditions of the conductor remain the same.
For experimental verification: Verify Ohm’s law
Apparatus : A conductor of resistance R, an ammeter, a voltmeter, a battery, a variable resistance (or rheostat used to change the current in the circuit), connecting wires, a key and sand paper.
Procedure:

Plot a graph between V and I by taking V along X-axis and I along Y-axis. We get a straight line passing through origin as shown in figure 11. 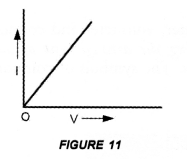 Conclusion: From the graph between V and I, we conclude that I x V, which is Ohm’s law. Hence Ohm’s law is verified experimentally.
Precautions: While verifying Ohm’s law experimentally, the following precautions should be taken :

Ohm’s law holds good if the temperature of the conductor remains the same. 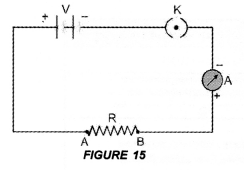 Conclusion : Same amount of current flows through each resistor or element connected in series combination.

Question 35.
Find out the following in the circuit given in the figure. 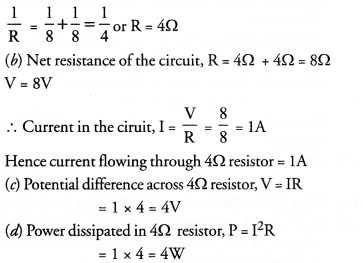 (e) Since same current flows through every part in a series circuit and both the ammeters are connected in series, so there will be no difference in ammeter readings.