About 78% of earth atmosphere contains dinitorgen (N2) gas. It is also present in earth crust as sodium nitrate (Chile saltpetre) and potassium nitrate (Indian saltpetre). The 11th most abundant element phosphorus, exists as phosphate (fluroapatite, chloroapatite and hydroxyapatite). The other elements arsenic, antimony and bismuth are present as sulphides and are not very abundant. 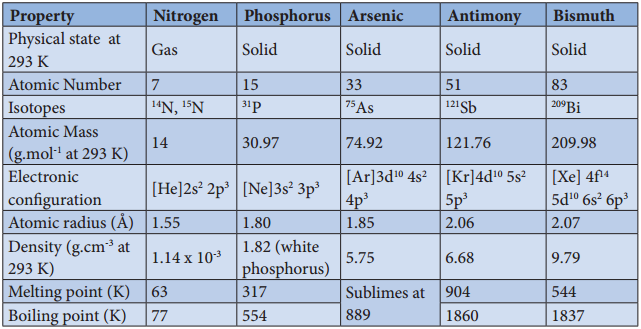 Nitrogen, the principal gas of atmosphere (78% by volume) is separated industrially from liquid air by fractional distillation

It can also be obtained by oxidising ammonia using bromine water

Nitrogen gas is rather inert. Terrestrial nitrogen contains 14.5% and 0.4% of nitrogen-14 and nitrogen-15 respectively. The later is used for isotopic labelling. The chemically inert character of nitrogen is largely due to high bonding energy of the molecules 225 cal mol-1 (946 kJ mol-1).

Interestingly the triply bonded species is notable for its less reactivity in comparison with other iso-electronic triply bonded systems such as -C≡C-, C≡O, X-C≡N, X-N≡C, -C≡C-, and -C≡N. These groups can act as donor where as dinitrogen cannot. However, it can form complexes with metal (M ← N≡N) like CO to a less extent.

The only reaction of nitrogen at room temperature is with lithium forming Li3N. With other elements, nitrogen combines only at elevated temperatures. Group 2 metals and T forms ionic nitrides.

Direct reaction with hydrogen gives ammonia. This reaction is favoured by high pressures and at optimum temperature in presence of iron catalyst. This reaction is the basis of Haber’s process for the synthesis of ammonia.

Ammonia is prepared in the laboratory by heating an ammonium salt with a base.

It can also be prepared by heating a metal nitrides such as magnesium nitride with water.

It is industrially manufactured by passing nitrogen and hydrogen over iron catalyst a small amount of K2O and Al2O3 is also used to increase the rate of attainment of equilibrium) at 750 K at 200 atm pressure. In the actual process the hydrogen required is obtained from water gas and nitrogen from fractional distillation of liquid air.

Ammonia is a pungent smelling gas and is lighter than air. It can readily liquefied by at about 9 atmospheric pressure. The liquid boils at – 38.4°C and freezes at – 77° C. Liquid ammonia resembles water in its physical properties. i.e. it is highly associated through strong hydrogen bonding. Ammonia is extremely soluble in water (702 Volume in 1 Volume of water) at 20°C and 760mm pressure.

At low temperatures two soluble hydrate NH3.H2O and 2NH3.H2O are isolated. In these molecules ammonia and water are linked by hydrogen bonds. In aqueous solutions also ammonia may be hydrated in a similar manner and we call the same as (NH3.H2O)

The dielectric constant of ammonia is considerably high to make it a fairly good ionising solvent like water.

Above 500°C ammonia decomposes into its elements. The decomposition may be accelerated by metallic catalysts like Nickel, Iron. Almost complete dissociation occurs on continuous sparking.

Ammonia does not burn in air but burns freely in free oxygen with a yellowish flame to give nitrogen and steam.

In presence of catalyst like platinum, it burns to produce nitric oxide. This process is used for the manufacture of nitric acid and is known as ostwalds process.

Ammonia acts as a reducing agent. It reduces the metal oxides to metal when passed over heated metallic oxide.

When treated with acids it forms ammonium salts. This reaction shows that the affinity of ammonia for proton is greater than that of water.

Reaction with Chlorine and Chlorides:

Ammonia reacts with chlorine and chlorides to give ammonium chloride as a final product. The reactions are different under different conditions as given below. 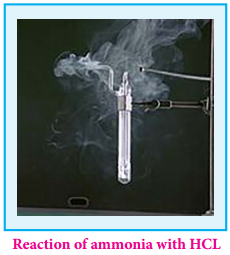 With excess of chlorine ammonia reacts to give nitrogen trichloride, an explosive substance.

Formation of Amides and Nitrides:

With strong electro positive metals such as sodium, ammonia forms amides while it forms nitrides with metals like magnesium.

Ammonia forms ammonated compounds by ion dipole attraction. Eg. [CaCl2.8NH3]. In this, the negative ends of ammonia dipole is attracted to Ca2+ ion.

It can also act as a ligand and form coordination compounds such as [Co(NH3)6]3+, [Ag(NH3)2]+. For example when excess ammonia is added to aqueous solution copper sulphate a deep blue colour compound [Cu(NH3)4]2+ is formed. 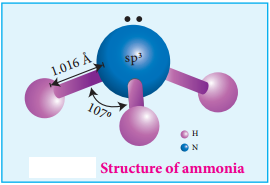 Nitric acid prepared in large scales using Ostwald’s process. In this method ammonia from Haber’s process is mixed about 10 times of air. This mixture is preheated and passed into the catalyst chamber where they come in contact with platinum gauze.

The temperature rises to about 1275 K and the metallic gauze brings about the rapid catalytic oxidation of ammonia resulting in the formation of NO, which then oxidised to nitrogen dioxide.

The nitrogen dioxide produced is passed through a series of adsorption towers. It reacts with water to give nitric acid. Nitric oxide formed is bleached by blowing air.

Pure nitric acid is colourless. It boils at 86°C. The acid is completely miscible with water forming a constant boiling mixture (98% HNO3, Boiling point 120.5 °C). Fuming nitric acid contains oxides of nitrogen. It decomposes on exposure to sunlight or on being heated, into nitrogen dioxide, water and oxygen.

Due to this reaction pure acid or its concentrated solution becomes yellow on standing. In most of the reactions, nitric acid acts as an oxidising agent. Hence the oxidation state changes from + 5 to a lower one. It doesn’t yield hydrogen in its reaction with metals. Nitric acid can act as an acid, an oxidizing agent and an nitrating agent.

As an Oxidising Agent:

The nonmetals like carbon, sulphur, phosphorus and iodine are oxidised by nitric acid.

In organic compounds replacement of a – H atom with – NO2 is often referred as nitration. For example.

Nitration takes place due to the formation of nitronium ion

Action of Nitric Acid on Metals

All metals with the exception of gold, platinum, rhodium, iridium and tantalum reacts with nitric acid. Nitric acid oxidises the metals. Some metals such as aluminium, iron, cobalt, nickel and chromium are rendered passive in concentrated acid due to the formation of a layer of their oxides on the metal surface, which prevents the nitric acid from reacting with pure metal.

With weak electropositive metals like tin, arsenic, antimony, tungsten and molybdenum, nitric acid gives metal oxides in which the metal is in the higher oxidation state and the acid is reduced to a lower oxidation state. The most common products evolved when nitric acid reacts with a metal are gases NO2, NO and H2O. Occasionally N2, NH2OH and NH3 are also formed.

The reactions of metals with nitric acid are explained in 3 steps as follows:

Primary Reaction:
Metal nitrate is formed with the release of nascent hydrogen

The secondary products either decompose or react to give final products

Decomposition of the Secondary:

Copper reacts with nitric acid in the following manner

The concentrated acid has a tendency to form nitrogen dioxide

Magnesium reacts with nitric acid in the following way

If the acid is diluted we get N2O

Oxides and Oxoacids of Nitrogen 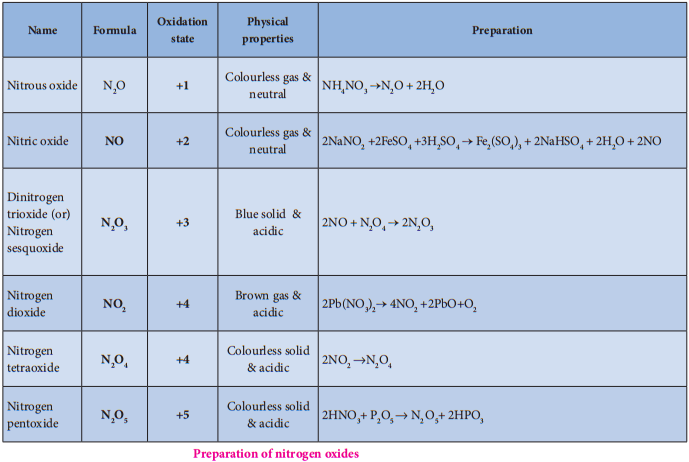 Structures of Oxides of Nitrogen: 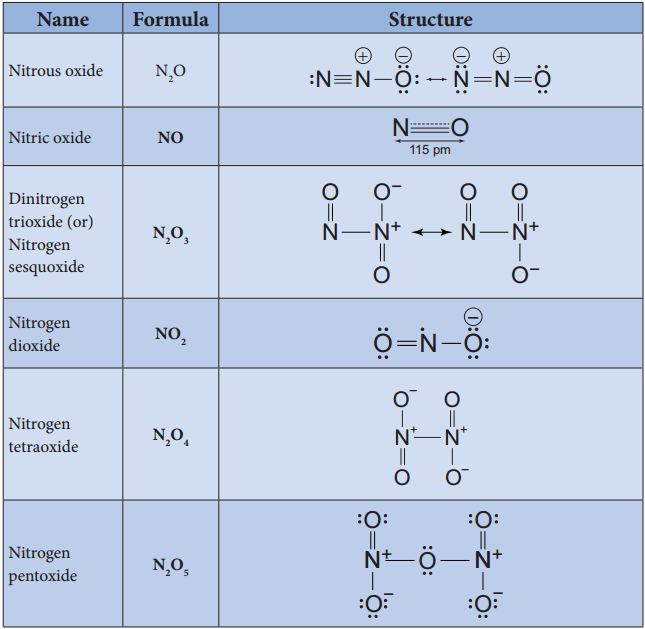 Structures of Oxoacids of Nitrogen: 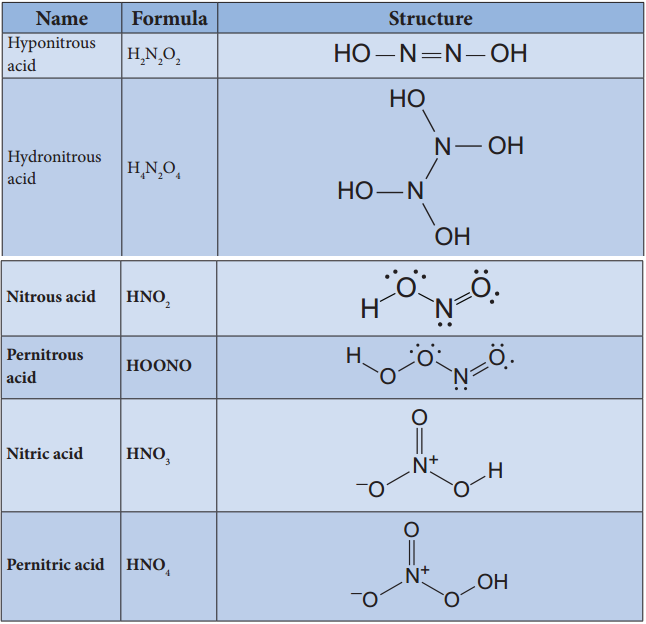 Preparation of Oxoacids of Nitrogen: 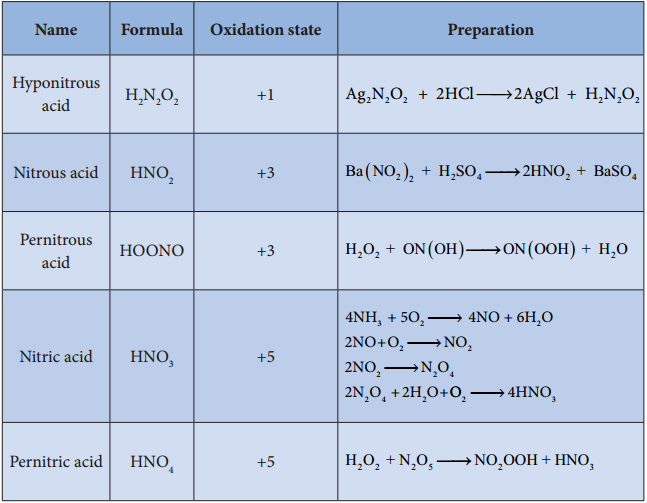 Phosphorus has several allotropic modification of which the three forms namely white, red and black phosphorus are most common. The freshly prepared white phosphorus is colourless but becomes pale yellow due to formation of a layer of red phosphorus upon standing.

Hence it is also known as yellow phosphorus. It is poisonous in nature and has a characteristic garlic smell. It glows in the dark due to oxidation which is called phosphorescence. Its ignition temperature is very low and hence it undergoes spontaneous combustion in air at room temperature to give P2O5. 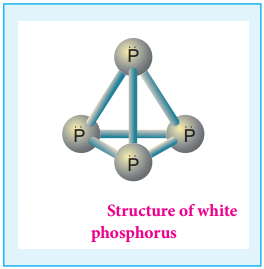 The phosphorus has a layer structure and also acts as a semiconductor. The four atoms in phosphorus have polymeric structure with chains of P4 linked tetrahedrally. Unlike nitrogen P≡P is less stable than P-P single bonds. Hence, phosphorus atoms are linked through single bonds rather than triple bonds. In addition to the above two more allotropes namely scarlet and violet phosphorus are also known for phosphorus.

Phosphorus is highly reactive and has the following important chemical properties

When phosphorus is treated with conc. nitric acid it is oxidised to phosphoric acid. This reaction is catalysed by iodine crystals.

Phosphorus reacts with metals like Ca and Mg to give phosphides. Metals like sodium and potassium react with phosphorus vigorously.

Phosphine is the most important hydride of phosphorus

Phosphine is prepared by action of sodium hydroxide with white phosphorus in an inert atmosphere of carbon dioxide or hydrogen.

Phosphine is freed from phosphine dihydride (P2H4) by passing through a freezing mixture. The dihydride
condenses while phosphine does not.

Phosphine can also prepared by the hydrolysis of metallic phosphides with water or dilute mineral acids.

Phosphine is prepared in pure form by heating phosphorous acid.

A pure sample of phosphine is prepared by heating phosphonium iodide with caustic soda solution.

It is colourless, poisonous gas with rotten fish smell. It is slightly soluble in water and is neutral to litmus test. It condenses to a colourless liquid at 188 K and freezes to a solid at 139.5 K.

Phosphine decomposes into its elements when heated in absence of air at 317 K or when electric current is passed through it.

When phosphine is heated with air or oxygen it burns to give meta phosphoric acid.

It reacts with halogens to give phosphorus penta halides.

Phosphine precipitates some metal from their salt solutions.

It forms coordination compounds with lewis acids such as boron trichloride.

In phosphine, phosphorus shows sp3 hybridisation. Three orbitals are occupied by bond pair and fourth corner is occupied by lone pair of electrons. Hence, bond angle is reduced to 93.5°. Phosphine has a pyramidal shape.

Phosphine is used for producing smoke screen as it gives large smoke. In a ship, a pierced container with a mixture of calcium carbide and calcium phosphide, liberates phosphine and acetylene when thrown into sea. The liberated phosphine catches fire and ignites acetylene. These burning gases serves as a signal to the approaching ships. This is known as Holmes signal. 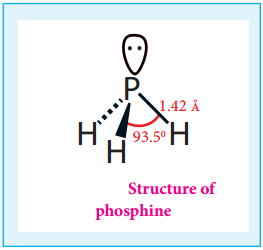 When a slow stream of chlorine is passed over white phosphorus, phosphorous trichloride is formed. It can also be obtained by treating white phosphorus with thionyl chloride.

This reaction involves the coordination of a water molecule using a vacant 3d orbital on the phosphorous atom following by elimination of HCl which is similar to hydrolysis of SiCl4.

This reaction is followed by two more steps to give P(OH)3 or H3PO3.

Similar reactions occurs with other molecules that contains alcohols and carboxylic acids.

Phosphorus trichloride is used as a chlorinating agent and for the preparation of H3PO3. 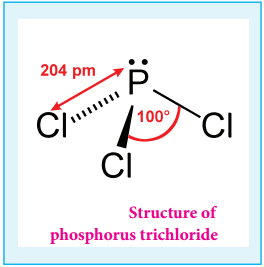 When PCl3 is treated with excess chlorine, phosphorous pentachloride is obtained.

On heating phosphorous pentachloride, it decomposes into phosphorus trichloride and chlorine.

Phosphorous pentachloride reacts with water to give phosphoryl chloride and orthophosphoric acid.

Phosphorous pentachloride is a chlorinating agent and is useful for replacing hydroxyl groups by chlorine atom.

Structure of Oxides and Oxoacids of Phosphorus 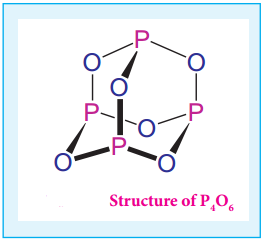 In P4O10 each P atoms form three bonds to oxygen atom and also an additional coordinate bond with an
oxygen atom.

Terminal P-O bond length is 143 pm, which is less than the expected single bond distance. This may be due to lateral overlap of filled p orbitals of an oxygen atom with empty d orbital on phosphorous. 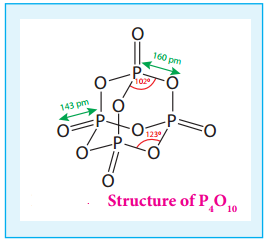 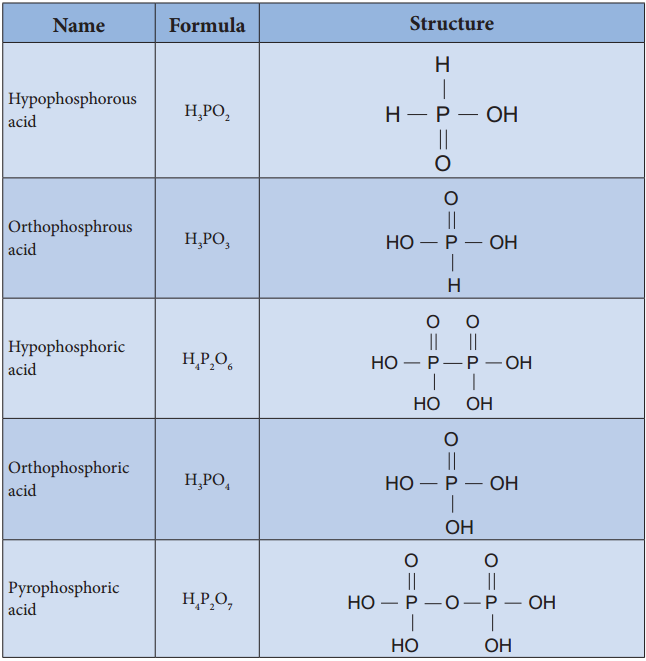 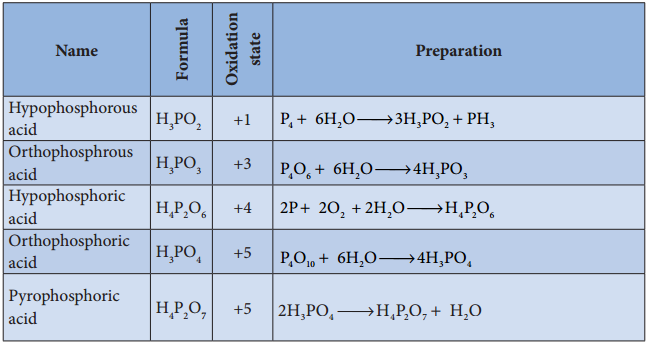 Elements belonging group 16 are called chalgogens or ore forming elements as most of the ores are oxides or sulphides. First element oxygen, the most abundant element, exists in both as dioxygen in air (above 20% by weight as well as volume) and in combined form as oxides.

Oxygen and sulphur makes up about 46.6% & 0.034 & of earth crust by weight respectively. Sulphur exists as sulphates (gypsum, epsom etc…) and sulphide (galena, Zinc blende etc…). It is also present in the volcanic ashes. The other elements of this groups are scarce and are often found as selenides, tellurides etc along with
sulphide ores.

The common physical properties of the group 16 elements are listed in the Table. 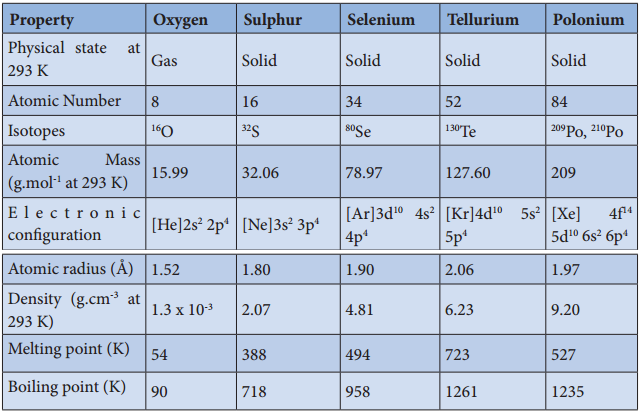