Macromolecules immobilized or fixed on nitrocellulose membrane i.e., blotted can be subjected to a variety of analytical techniques more easily. Southern blotting was the first blotting technique developed which made the analysis and recording of DNA easy.

Later the technique was extended for analysis of RNA and proteins and they have acquired the jargon terms Northern and Western Blotting respectively.

Western blotting technique is used for the identification of a particular protein from the mixture of a proteins. In this method, the proteins are first extracted from the sample. Extracted proteins are subjected to Poly Acryl – amide Gel Electrophoresis (PAGE).

Transfer of proteins from poly acryl amide to the nitrocellulose paper is achieved by applying electric field. When radio labelled specific antibody is added on such membrane it binds to the specific complementary protein. Finally the proteins on the membrane can be detected by staining or through ELISA technique.

Step I:
Extraction of Protein

The most common protein sample used for Western blotting is cell lysate. The protein from the cell is generally extracted by mechanical means or by adding chemicals which can lyse the cell. The extraction step is termed as tissue preparation.

Protease inhibitor is used to prevent the denaturing of proteins. Using spectroscopy the concentration of the protein sample is analysed and diluted in loading buffer containing glycerol. This will help the sample to sink in the well. Bromothymol blue is used as tracking dye and is used to monitor the movement of the sample.

The protein sample is loaded in well of SDS-PAGE (Sodium dodecyl sulfatepoly-acryl amide gel electrophoresis). The proteins are separated on the basis of electric charge, isoelectric point, molecular weight, or combination of all these. Proteins are negatively charged, so they move toward positive (anode) pole as electric current is applied. Smaller proteins move faster than the larger proteins.

Blotting refers to the transfer of the protein from the gel to the nitrocellulose paper by capillary action. Electro blotting is done nowadays to speed up the process. In electro-blotting nitrocellulose membrane is sandwich between gel and cassette of filter paper and then electric current is passed through the gel causing transfer of protein to the membrane.

The nitrocellulose membrane is nonspecifically saturated or masked by using casein or Bovine serum albumin (BSA) before adding the primary antibody. This blocking step is very important in western blotting as antibodies are also proteins and they are likely to bind to the nitrocellulose paper.

Finally, the reaction mixture is incubated with specific substrate. The enzyme convert the substrate to give visible coloured product, so band of colour can be visualized in the membrane (Figure 11.6). 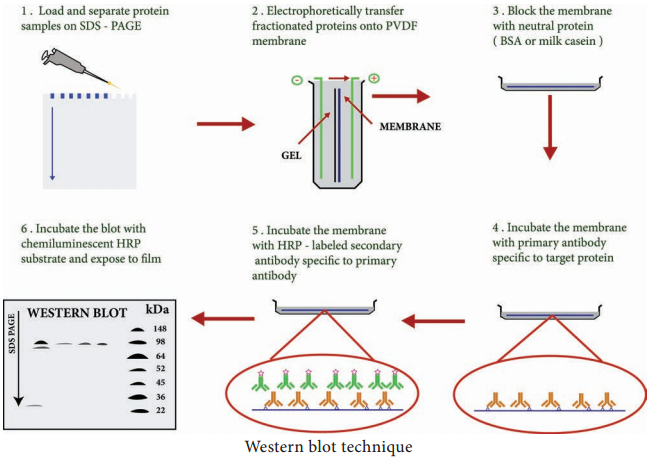