Hydrogen is conveniently prepared in laboratory by the reaction of metals, such as zinc, iron, tin with dilute acid. 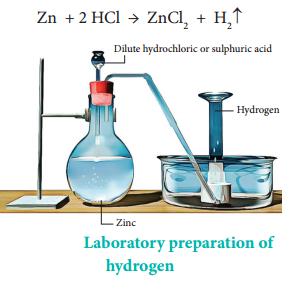 In the large-scale, hydrogen is produced by steam-reforming of hydrocarbons. In this method hydrocarbon such as methane is mixed with steam and passed over nickel catalyst in the range 800-900 °C and 35 atm pressures.

In an another process, steam is passed over a red-hot coke to produce carbon monoxide and hydrogen. The mixture of gases produced in this way is known as water gas (CO+H2). This is also called syngas (Synthetic gas) as it is used in the synthesis of organic compounds such as methanol and simple hydrocarbons.

Conversion of Carbon Monoxide in Water gas to Carbon Dioxide:

The carbon monoxide of the water gas can be converted to carbon dioxide by mixing the gas mixture with more steam at 400°C and passed over a shift converter containing iron/copper catalyst. This reaction is called as water-gas shift reaction.

The CO2 formed in the above process is absorbed in a solution of potassium carbonate.

Normal water contains 1.6 × 10-4 percentage of heavy water. The dissociation of protium water (H2O) is more than heavy water (D2O). Therefore, when water is electrolysed, hydrogen is liberated much faster than D2. The electrolysis is continued until the resulting solution becomes enriched in heavy water. Further electrolysis of the heavy water gives deuterium.

As explained earlier the tritium is present only in trace amounts. So it can be artificially prepared by bombarding lithium with slow neutrons in a nuclear fission reactor. The nuclear transmutation reaction for this process is as follows.