The genus Clostridium consists of anaerobic, spore forming Gram positive bacilli. The spores are wider than the bacterial bodies, giving the bacillus a swollen appearance resembling a spindle. The name Clostridium is derived from the word ‘kluster’ (a spindle).

Most species are saprophytes found in soil, water and decomposing plant and animal matter. Some of the pathogens are normal flora of intestinal tract of human and animals.

The genus Clostridium includes bacteria that causes 3 major diseases of human – Tetanus, gas gangrene and food poisoning. Clostridium pathogenicity is mainly due to production of a powerful exotoxin.

Clostridium of medical importance may be classified based on diseases they produce, which is given the Table (7.7).

They are Gram positive spore forming rods. The spores are spherical and terminal in position giving a drumstick appearance. They are motile and non – capsulated.

This results in muscle rigidity and spasms (due to the simultaneous contraction of agonists and antagonists, in the absence of reciprocal inhibition (Figure 7.11). 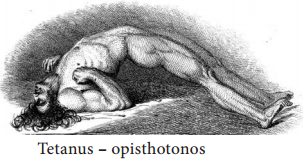 It includes, pain and tingling at the site of wound, Lock jaw ortrismus (It is reduced opening of the jaws), Risus sardonicus (mouth kept slightly open), Dysphasia (impairment of the ability to speak or to understand language) and acute asphyxia.

Culture:
The clinical specimen is inoculated on blood agar and incubated at 37°C for 24-48 hours under anaerobic conditions. The colonies are confirmed by gram staining, where it shows gram positive bacilli with drumstick appearance.

Tetanus patients are treated in special isolated units, to protect them from noise and light which may provoke convulsions. The spasm can be controlled by diazepam (0.1 – 0.2 mg/kg) injection. Antibiotic therapy with pencilin or metroniadazole should be done for a week or more.

It is done by the following methods, which are as follows.

It aims at removal of foreign body, blood clots and damaged tissue in order to prevent anaerobic conditions favorable for the
germination of spores.

Tetanus is a preventable disease. Immune prophylaxis is of 3 types, which is given in the (Table 7.9).
Table 7.9: Immunization for tetanus. 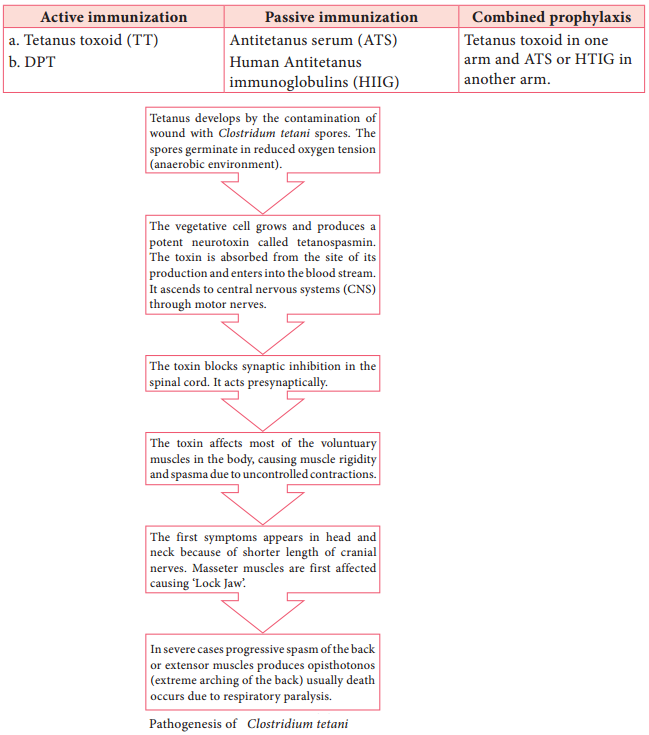