We have decided to create the most comprehensive English Summary that will help students with learning and understanding.

All Summer in a Day Story Summary by Ray Douglas Bradbury

Ray Douglas Bradbury was born on 22nd August, 1920 in Waukegan, Illinois, US. He was an American fantasy, science fiction, horror and mystery fiction author and screenwriter. He was widely known for his novel Fahrenheit 451 as well as his science fiction and horror story collections. Bradbury was one of the most celebrated twentieth and twenty first century American writers.

He wrote in several genres such as the Coming-of-age, novel Dandelion Wine or the fictionalized memoir Green Shadows and White Whale. He received numerous awards including Pulitzer Citation in 2007. Bradbury also wrote and consulted on screenplays and television scripts which included Moby Dick and It Came from Outer Space.He died on 5th June, 2012 the age of 91 in California, US. On his death, the New York Times called Bradbury ‘the writer most responsible for bringing modern science fiction into the literary mainstream’.

All Summer in a Day Summary of the Story

The story is set on the planet Venus, where the sun shines only for two hours and that too once in every seven years. The story opens on the day when the sun is going to appear. A group of school children live on this planet with their families. They are nine years old. It has been raining continuously since five years. The scientists have predicted that the sun will appear only for a brief period of time. The children have seen the sun once in their lives, when they were only two years old, the sun first appeared and so they don’t remember how it looks. Whole day they have been reading about the sun. 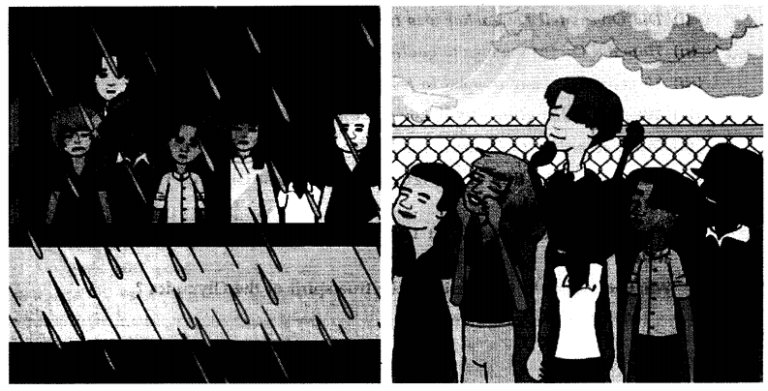 One of the children Margot who is a thin and pale girl has lived in Ohio till she was four. She remembers the sun and the sky. She tells them about its size and color. She is going again to earth according to her parent’s wish. She doesn’t participate in any classroom activity which doesn’t include sun and that is why children hated her.

The children are waiting anxiously for the sun to come out. The other children are upset with Margot and start pushing and taunting her. They make fun of her. A boy even seizes her saying that there will be no sun that day and all is a joke.

While there teacher is gone, they hide her in a closet in spite of her protest. The teacher comes back and they all .turn towards the tunnel’s exit. The teacher confirms if all are present and moments later the rain stops and sun appears. All the children feel happy and begin to enjoy. They run, laugh, slip and fell among the jungle trees that cover the Venus. And then sun faded behind the mist. The sky darkens and rain falls harder. All the children stopped for a moment before entering the tunnels.

As they enter, they ask their teacher, “Will it be seven more years?” a student gives a muffled cry and they remember that Margot is still in the closet. She was there in the closet when all were enjoying the sun. They walk slowly towards the closet, no noises are heard. They open the closet and Margot emerges out.

All Summer in a Day Summary Theme

The writer has tried to depict the image of life on Venus, an image that is completely unfamiliar for a common man. But by using various metaphors and language, he tried to present a crystal clear image of planet Venus. It had been raining for seven years on the planet and it is the day when the sun would appear. The importance of sun has been emphasized. How the people who urged to find life on another planet were dying to get a glimpse and warmth of sun. The children were happy to feel the sun on their cheeks and wanted it to burn their arms.

Most of them squinted at the sun until the tears rolled down their cheeks. Moreover, the impact of sun-less planet is also notable. In the absence of sun, the faces were pale and colorless. They were not only physically weak but emotionally too. It had not only faded the colors of their skin but had also faded the, sympathy and pity for others. Until and unless the sun rays fell upon them just as energy boosters, they lacked feelings.

Another theme is of coexistence of people from different planet. Margot was isolated and faced difficulties just because she came from another community. She tried hard to fit in their planet but they resent her about her past experiences on earth. They felt jealous and angry. Thus the theme of ignorance has also been highlighted. The children were ignorant of the benefits of the sun but once they experienced it, their attitude changed.The illustrated language of the writer has enabled the reader to draw the picture of life and landscape on Venus.

All Summer in a Day Summary Characters

She is the main character in the story. She is a delicate and pale child. She is an introvert and doesn’t want to mix up with anybody. She moved to Venus when she was only four years old and she remembers the sun. She remembers the beautiful life on earth with the yellow light and without constant sound of raindrops. Here on Venus, the life without the golden sunshine is very boring and depressing. Because she doesn’t want to play with the other children when they sing or draw or do any activity which doesn’t include sun, the children tease her and taunt her in various ways. They are unable to understand the mental position of Margot. They bully her and that’s why she remains aloof. She is sensitive and true to herself.

William is the antagonist in the story. He is the main culprit who talks or takes actions on behalf of other children. He is a jealous kind of boy who is devoid of any feelings and this may be due to the absence of the sunlight on the planet Venus on which he lives since his childhood. His power of thinking has lost and limited to certain activities only. He fails to understand Margot and speaks to her in a harsh tone. He shoves her and asks the other children to behave in the same manner. There is no mention of his appearance so one can only understand him by his nature.

The children Eire in the background of the story after the main characters Margot and William. They provide support to these characters and help in the development of the story. They follow WilliEim without giving a single thought to the results. They are all the victims of depression created on Venus due to lack of sunlight for continuous seven years. They have been traumatized by the constant rain. They experience joys and displeasure in accordance with nature. When there is no sun, they seem dull sind lethargic but as soon as sun appears Edthough for a short span of time, they feel excited and show energetic activities. They play, laugh, fall, slip and do many actions because we know that sun is the main source of energy.

The role of teacher is momentary. The name of the teacher is not mentioned and nothing much is told about her but still her presence is felt and still she is a part of the children’s world. She does her duty, scolds William, keeps an eye on children but all Eire very limited. She is unable to know where the children have kept Margot. But she is vigilant and it is clear from her instructions to the children not to go too far when the sun appears.

All Summer in a Day Summary Word-Meanings