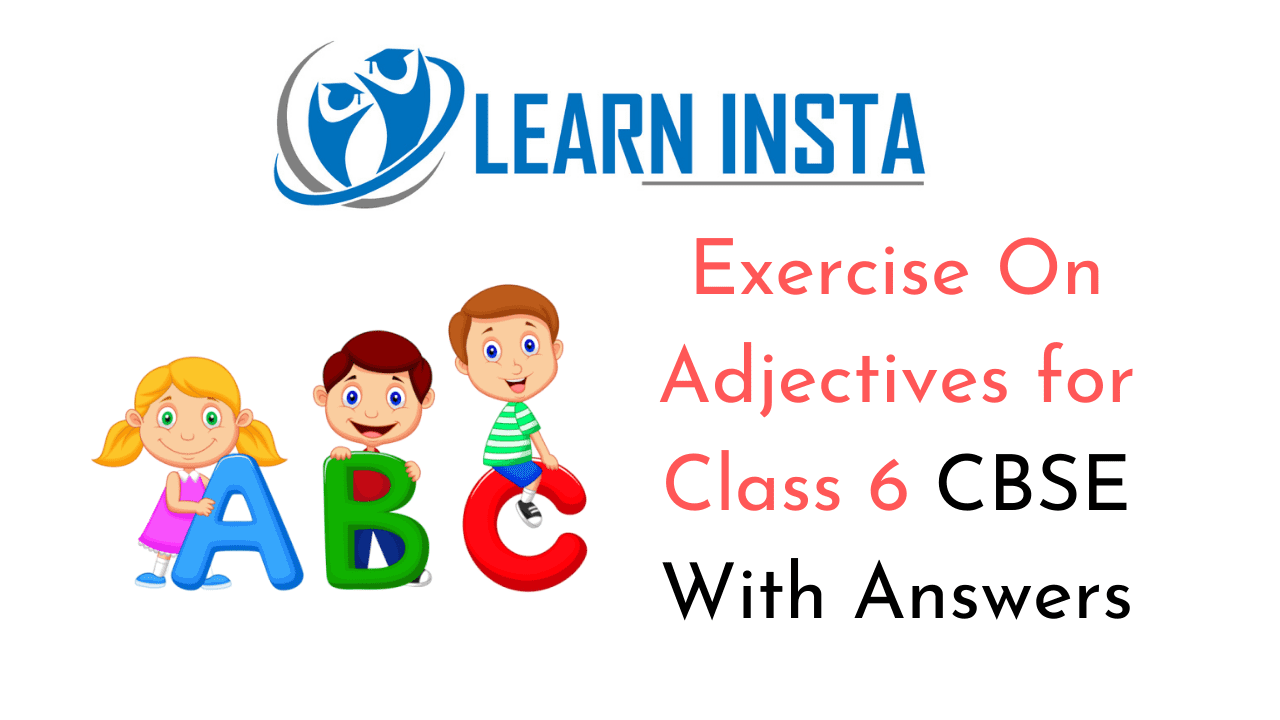 Exercise On Adjectives for Class 6 CBSE With Answers Pdf

What are the Different kinds of Adjectives? 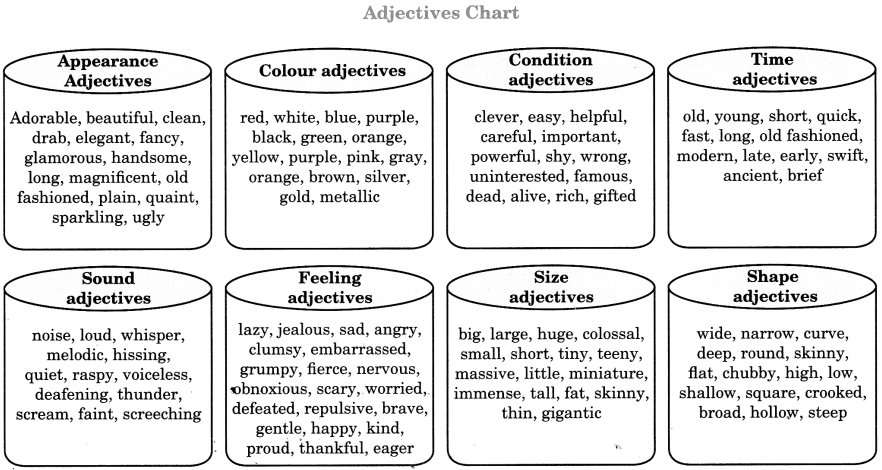 There are five types of adjectives. These are:

1. Descriptive Adjectives or Adjectives of Quality: Among the different kinds of adjectives, descriptive adjectives are probably the most common ones. They simply say something about the quality or the kind of the noun or pronoun they’re referring to.
Examples:

2. Adjectives of Number or Adjectives of Quantity: As the name suggests, this kind of adjective answers the questions, “How many?” or “how much?”
Examples:

3. Demonstrative Adjectives: Demonstrative adjectives point out pronouns and nouns, and always come before the words they are referring to.
Examples:

4. Possessive Adjectives: Obviously, this kind of adjectives shows ownership or possession. Aside frojn that, possessive adjectives always come before the noun.
Examples:

Question 1.
Tick the appropriate word in the following.
(i) The (later/latter) part of the film is boring.
(ii) (Every/Each) man wants to be rich.
(iii) Don’t leave the station till (farther/further) orders.
(iv) She is my (older/elder) sister.
(v) (All/whole) newspaper want to cover sensational issues.
(vi) Have you read (any/some) novel recently.
(vii) I have (a little/little) time. I can not visit her.
(viii) (a few/few) members were present, no decision could be made.
(ix) I have (some/any) good news for you.
(x) The former is a writer, the (later/latter) a fighter.
Answer:
(i) latter
(ii) Every
(iii) Further
(vi) any
(vii) little
(viii) a few

Question 2.
Fill in the blanks with the most suitable adjectives from the box..

Question 1.
Circle the adjective that best describes the underlined noun.
(i) A (big/tasty) dog was chewing on a bone.
(ii) Isaac rode to school in a (tiny/yellow) bus
(iii) It was a very (cold/dented) day
(iv) Ann asked a (blue/strong) man to open her bottle.
(v) Brooke left her (warm/purple) jump rope or the playground.
(vi) Jaysa hurt her mouth on a (hot/sticky) piece of pizza
(vii) Deagen had to fix his (slippery/ broken) glasses
(viii) Autumn was excited to see the (cold/huge) elephant at the zoo.
(ix) Vikas was shy around the (beautiful/left) girl.
(x) The Empire State Building is a very (flat/tall) building

Question 3.
Match the adjectives and opposites 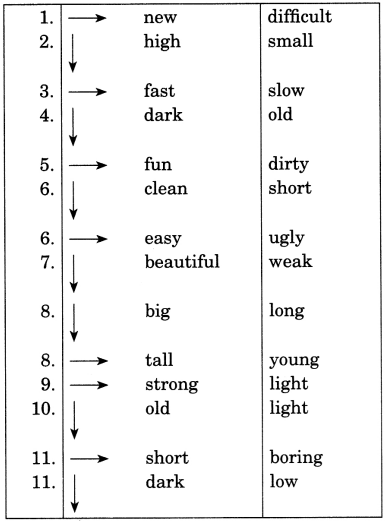 Question 4.
Put the opposite into the crossword puzzle 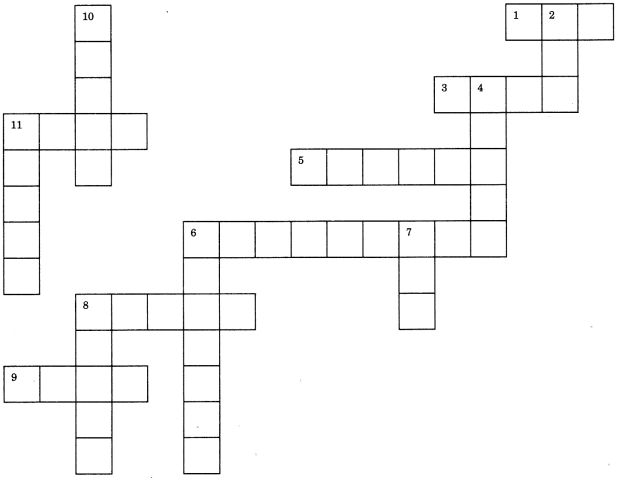 In the above examples, ‘hot, old, beautiful, white, intelligent’ are adjectives because they modify (give more information about) the attached nouns.

Every adjective has its three degrees.

These three degrees of an adjectives express the intensity of adjectives in increasing order e.g. big – bigger, good – better – best.
1. A few adjectives change completely in the comparative and superlative forms. They are know as irregular adjectives.

Adjectives with exactly two syllabus can be formed in either way.

3. Adjectives with two syllabus ending in y form the comparative and superlative degrees with the suffixes.

Some adjectives only sound right with the suffixes.

Others only sound right with more and most.

Exercise Solved Examples On Degrees of Adjective for Class 6 CBSE

Exercise Practice Examples On Degrees of Adjective for Class 6 CBSE

Question 1.
Fill in the blanks

Question 4.
Fill the spaces with the correct from of adjectives.

Question 5.
Underline the adjective that makes each sentence correct. 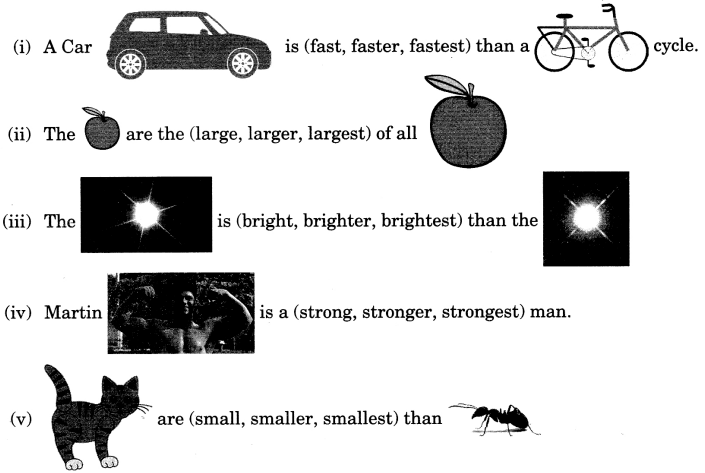