Question 1.
Mention the advantages of selecting pea plant for experiment by Mendel.
Solution:
Mendel selected garden pea for his experimental work because it had the following advantages:

Question 2.
Differentiate between the following:

Question 3.
A diploid organism is heterozygous for 4 loci, how many types of gametes can be produced?
Solution:
A diploid organism heterozygous for 4 loci will have the supported genetic constitution YyRr for two characters. The alleles Y-y and R-r will be present on different 4 loci. Each parent will produce four types of gametes – YR, Yr, yR, yr.

Question 4.
Explain the law of dominance using a monohybrid cross.
Solution:
Law of dominance states that when a pair of alleles or allelomorphs are brought together in F1 hybrid, then only one of them expresses itself, masking the expression of other completely. Monohybrid cross was made to study simultaneous inheritance of a single pair of Mendelian factors. The cross in which only alternate forms of a single character are taken into consideration is called monohybrid cross. The trait which appeared in the F1 generation was called dominant and the other which did not appear in the F1 population was called recessive. 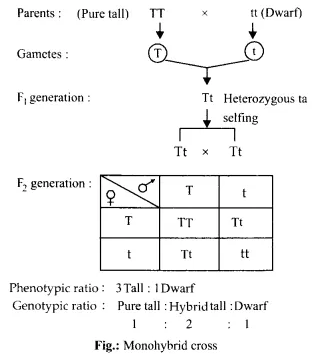 Thus, when a pair of alleles are brought together in F1 hybrid, then
only one of them expresses itself masking the expression of other completely. In the above example, in Tt – F1 hybrid (tall) only ‘T’ expresses itself so dominant and ‘t’ is masked so recessive. Thus, this’ proves and explains the law of dominance.

Question 5.
Define and design a test-cross.
Solution:
Crossing of F1 individual having dominant phenotype with its homozygous recessive parent is called test cross. The test cross is used to determine whether the individuals exhibiting dominant character are homozygous or heterozygous.
Example : When a tall plant (TT) is crossed with dwarf plant (tt) in the F1 , generation only tall plant (Tt) appear which is then crossed with homozygous recessive (tt) in a test cross. 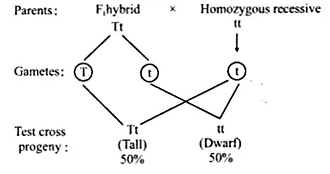 In the given test cross between tall hetero-zygous F1 hybrid with dwarf homozygous recessive parent produces tall and dwarf progeny in equal proportion indicating that F : hybrids are heterozygous.

Question 6.
Using a Punnett square, workout the distribution of phenotypic features in the first filial generation after a cross between a homozygous female and a heterozygous male for a single locus.
Solution:
When a heterozygous male tall plant (Tt) is crossed with homozygous dominant female tall plant (TT), we get two types of gametes in males : half with T and half with t and in females, we get only one type of gametes i.e., T. 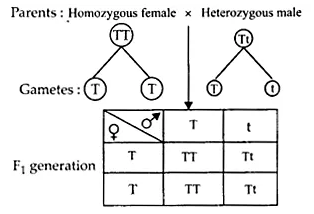 Question 7.
When a cross is made between tall plant with yellow seeds (TtYy) and tall plant with green seed (Ttyy), what proportions of phenotype in the offspring could be expected to be 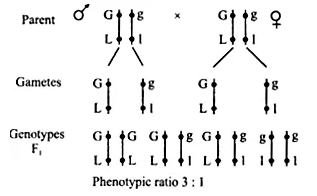 This means, if ‘G’ represent grey body (dorhinant), ‘g’ black body (recessive), ‘L’-long (dominant) and ‘I’-dwarf (recessive) then the distribution of phenotypic features in F1 generation will be 3 : 1 i.e. 3/4 will show the dominant feature, grey and long, either in homozygous (GGLL) or in heterozygous (GgLl) condition and 1/4 will show the recessive feature, black and dwarf (ggll).

Question 9.
Briefly mention the contribution of T.H. Morgan in genetics.
Solution:
Thomas Hunt Morgan (1866-1945) is called father of experimental genetics. He was an American scientists, famous for his experimental research with the fruit fly (Drosophila) by which he established the chromosome theory of heredity. He discovered presence of gene over chromosomes, chromosome theory of linkage, chromosome mapping, crossing over, criss-cross inheritance & mutability of genes. Morgan’s work played a key role in establishing the field of genetics. He received the nobel prize for physiology or Medicine in 1933.

Question 10.
What is pedigree analysis ? Suggest how such an analysis, can be useful.
Solution:
A record of inheritance of certain genetic traits for two or more generations presented in the form of a diagram of family tree is called pedigree. Pedigree analysis is study of pedigree for the transmission of particular trait and finding the possibility of absence or presence of that trait in homozygous or heterozygous state in a particular individual. Pedigree analysis is useful for the following :

Question 11.
How is sex determined in human beings?
Solution:
Chromosomal determination of sex in human beings is of XX-XY type. Human beings have 22 pairs of autosomes and one pair of sex chromosomes. The female possess two homomorphic (= isomorphic) sex chromosomes, named XX. The males contain two heteromorphic sex chromosomes, i.e., XY. All the ova formed by female are similar in their chromosome type (22 + X). Therefore, females are homogametic. The male gametes or sperms produced by human males are of two types, gynosperms (22 + X) and androsperms (22 + Y). Human males are therefore, heterogametic. Sex of the offspring is determined at the time of fertilisation. Fertilisation of the egg (22 + X) with a gynosperm (22 + X) will produce a female child (44 + XX) while fertilisation with an androsperm (22 + Y) gives rise to male child (44 + XY). As the two types of sperms are produced in equal proportions, there are equal chances of getting a male or female child in a particular mating. As Y-chromosomes determines the male sex of the individual, it is also called androsome. 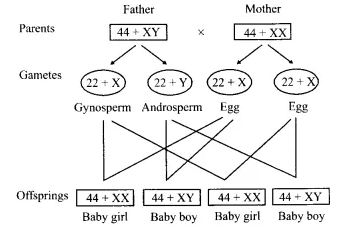 Question 14.
What is point mutation? Give one example.
Solution:
When heritable alterations occur in a very small segment of DNA molecule i.e., a single nucleotide or nucleotide pair, then these type of mutations are called point mutations (also called as gene mutations). The point mutations may occur due to inversion, substitution (transition and transversion) and frameshift (insertion and deletion) type of nucleotide change in the DNA or RNA. Phenylketonuria (PKU; Foiling 1934) is an inborn, autosomal, recessive metabolic disorder in which the homozygous recessive individual lacks the enzyme phenylalanine hydroxylase needed to change phenylalanine (amino acid) to tyrosine (amino acid) in liver. It results in hyperphenylalaninemia which is characterised by accumulation and excretion of phenylalanine, phenylpyruvic acid and related compounds. Lack of the enzyme is due to the abnormal autosomal recessive gene on chromosome 12. This defective gene is due to substitution. Affected babies are normal at birth but within a few weeks there is rise (30 – 50 times) in plasma phenylalanine level which impairs brain development. Other symptoms are mental retardation, decreased pigmentation of hair and skin and eczema.