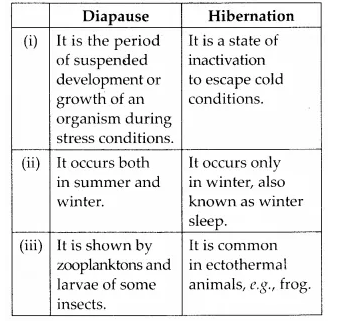 Question 5.
List the attributes that populations but not individuals possess.
Solution:

Question 8.
An orchid plant is growing on the branch of the mango tree. How do you describe this interaction between the orchid and the mango tree?
Solution:
An orchid growing as an epiphyte on a branch of mango tree is an example of commensalism. Commensalism is the relationship between individuals of two species of which one is benefited and the other is almost unaffected, i.e., neither benefited nor harmed. A commensal may get shelter (protection), or ride, or support instead of or in addition to food. Epiphytes are space parasites, they use trees only for attachment and manufacture their own food by photosynthesis. In Vanda, an epiphytic orchid, a special kind of aerial roots (hanging roots) hang freely in the air and absorb moisture with the help of their special absorptive tissue called velamen.

Question 10.
Distinguish between the following:

Question 11.
Write a short note on :
(a) Adaptations of desert plants and animals
(b) Adaptations of plants to water scarcity
(c) Behavioral adaptations in animals
(d) Importance of light to plants
(e) Effect of temperature or water scarcity and the adaptations of animals.
Solution:
a. Desert plants are called xerophytes. They have adaptations for increased water absorption, reduction in transpiration and water storage. Many desert plants have a thick cuticle on their leaf surfaces and have their stomata arranged in deep pits to minimise water loss through transpiration. They also have a special photosynthetic pathway that enables their stomata to remain closed during day time. In desert plants like Opuntia, leaves are reduced to spines. Animals of dry areas may use metabolic water and reduce water loss bypassing nearly solid faeces and urine.

b. Xerophytes have special adaptations to withstand prolonged periods of drought. These are of four types – ephemerals, annuals, succulents and non-succulent perennials.

d. Sun is the ultimate source of energy for most of the organisms on this earth. Light is the visible range of the electromagnetic spectrum. Light (400 nm-700nm) is effective in photosynthesis and is called photo-synthetically active radiation or PAR. The intensity of light, duration of light, etc. are also influencing the growth of plants.

(i) Temperature – Temperature is one of the most important environmental factors. The average temperature varies seasonally. It ranges from subzero level in polar areas and high altitudes to more than 50°C in tropical deserts in summer and exceeds 100°C in thermal springs and deep-sea hydrothermal vents.

(ii) Water – Next to temperature, water is the most important factor which influences the life of organisms. The productivity and distribution of land plants are dependent upon the availability of water. Animals are adapted according to water availability. E.g., aquatic animals are ammonotelic while xerophytic animals excrete dry feces and concentrated urine.

(iii) Light – Plants produce food through photosynthesis for which sunlight is essential to the source of energy. Light intensity, light duration and light quality influences the number of life processes in organisms, such as – photosynthesis, growth, transpiration, germination, pigmentation, movement and photoperiodism.

(iv) Humidity – Humidity refers to the moisture (water vapour) content of the air. It determines the formation of clouds, dew and fog. It affects the land organisms by regulating the loss of water as vapour from their bodies through evaporation, perspiration and transpiration.

(vi) Soil – The soil is one of the most important ecological factor called the edaphic factor. It comprises of different layers called horizons. The upper weathered humus containing part of soil sustains terrestrial plant life.

Question 13.
Give an example for:

Question 14.
Define population and community.
Solution:
Population: A population is a group of individuals of the same species, which can reproduce among themselves and occupy a particular area in a given time.

Community: It is an assemblage of several populations in a particular area and time and exhibits interaction and interdependence through trophic relationship.

Question 15.
Define the following terms and give one example for each.
(a) Commensalism
(b) Parasitism
(c) Camouflage
(d) Mutualism
(e) Interspecific competition
Solution:

a. Commensalism is an interspecific interaction between individuals of two species where one species is benefitted and the other is not affected.
e. g. Orchid and mango tree.

b. Parasitism is an interspecific interaction between individuals of two species where generally small species is benefitted and the large species are affected, e.g. Malarial parasite and human beings.

c. Camouflage: It is the ability of the animals to blend with the surroundings or background. In this way, animals remain unnoticed for protection or aggression. An example is a stick insect.

d. Mutualism is an interspecific interaction between individuals of two species where both the interacting species are benefitted in an obligatory way. e.g. Pollination in plants by animals.

e. Interspecific competition: It is an interaction between individuals of two species where both the interacting species are affected, e.g. Monarch butterfly and Queen monarch.

Question 16.
With the help of a suitable diagram describe the logistic population growth curve.
Solution:
Logistic population growth curve or S-shaped or sigmoid growth curve is shown by the populations of most organisms. It has the following phases: lag phase, log phase, exponential phase and stationary phase. In lag phase there is little or no increase in population. In log phase increase in population starts and occurs at a slow rate in the beginning. During exponential phase, increase in population becomes rapid and soon attains its full potential rate. This is due to the constant environment, availability of food and other requirements of life in plenty, absence of predation and interspecific competition and no serious intraspecific competition so that the curve rises steeply upward. The growth rate finally slows down as environmental resistance increases.

Finally, the population becomes stable during the stationary phase because now the number of new cells produced almost equals to the number of cells that die. Every population tends to reach a number at which it becomes stabilized with the resources of its environment. A stable population is said to be in equilibrium, or at saturation level. This limit in population is a constant K and is imposed by the carrying capacity of the environment. The sigmoid growth form is represented by the following equation :