Question 1.
Fill in the blanks. 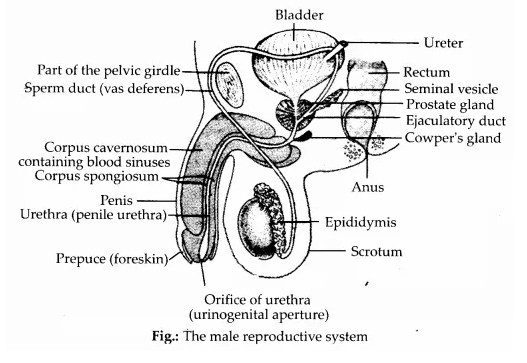 Question 5.
Describe the structure of a seminiferous tubule
Solution:
Seminiferous tubules are located in the testicles, and are the specific location of meiosis, and the subsequent creation of gametes, namely spermatozoa.

The seminiferous tubules are situated in testicular lobules. Both ends of the tubule are connected to the central region of the testis and form a network of small ductules called the rete testis.

Question 6.
What is spermatogenesis ? Briefly describe the process of spermatogenesis.
Solution:
Spermatogenesis is the process by which male spermatogonia develop into mature male gamete, spermatozoa. It starts at puberty and usually continues uninterrupted until death, although a slight decrease can be discerned in the quantity of produced sperm with increase in age. The process of spermatogenesis includes the formation of spermatogonia from germinal epithelium (primordial germ cell) through mitosis (multiplication phase). Finally they stop undergoing mitosis, grow and become primary spermatocytes (growth phase). Each spermatocyte undergoes meiosis (maturation phase). First maturation division is reductional, and produces two secondary spermatocytes. The latter divides by equational division (second maturation division) to form four haploid spermatids. Spermatids receive nourishment from the Sertoli cells to form sperms. This step is called spermiogenesis.

During this process one spermatogonium produces four sperms having half number of chromosomes. 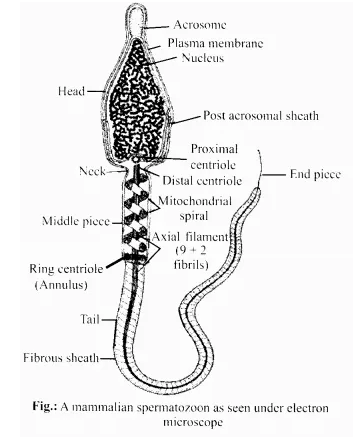 Question 10.
What are the major components of seminal plasma?
Solution:
Secretions of prostate gland, seminal vesicle and Cowper’s gland and , sperms together constitute semen.

Question 12.
What is oogenesis? Give a brief account of oogenesis.
Solution:
Oogenesis is the production and growth of the ova (egg cell) in the ovary. It starts only after the female has attained puberty. The process is induced by FSH from the anterior pituitary. It leads to the growth of a single Graafian follicle in one of the two ovaries every month. The developing ovary is colonised by primordial germ cells prior to birth which differentiate into oogonia. These enlarge within the follicle under the influence of mitotic division to form primary oocyte containing diploid number of chromosomes. These undergo reductional division (1st meiotic division) to form a secondary oocyte and first polar body. The secondary oocyte proceeds with meiosis II but the division gets arrested until fertilisation occurs. The ‘egg’ is released at secondary oocyte stage under the effect of LH. A second polar body is extruded. The first polar body may also divide to form two polar bodies of equal sizes which do not take part in reproduction and ultimately degenerates. During oogenesis one oogonium produces one ovum and three polar bodies. Polar bodies containing small amount of cytoplasm helps to retain sufficient amount of cytoplasm in the ovum which is essential for the development of early embryo. Formation of polar bodies maintains the half number of chromosomes in the ovum.

Question 13.
Draw a labelled diagram of a section through ovary.
Solution: 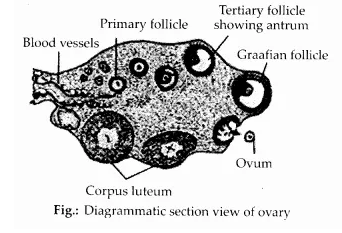 Question 14.
Draw a labelled diagram of a Graafian follicle ?
Solution: 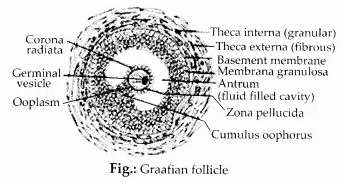 Question 15.
Give the functions of the following.

Solution:
The functions of the following:

Question 18.
What is parturition? Which hormones are involved in the induction of parturition?
Solution:

Therefore, all the haploid gametes produced by the female (ova) have the sex chromosome X whereas in the male gametes (sperms) the sex chromosome could be either X or Y, hence, 50 per cent of sperms carry the X chromosome while the other 50 per cent carry the Y. After fusion of the male and female gametes the zygote would carry either XX or XY depending on whether the sperm carrying X or Y fertilised the ovum. The zygote carrying XX would develop into a female baby and XY would form a male.

Question 20.
How many eggs are released by a human ovary in a month? How many eggs do you think would have been released if the mother gave birth to identical twins? Would your answer change if the twins born were fraternal?
Solution:
Each ovary develops a number of immature eggs associated with groups of other cells called follicles. Normally, in humans, only one egg is released at one time; occasionally, two or more erupt during the menstrual cycle. The egg erupts from the ovary on the 14th to 16th day of the approximately 28 day menstrual cycle. Identical twins occur when a single egg is fertilised to form one zygote (monozygotic) which then divides into two separate embryos. And if the twins were born fraternal two eggs are released. Fraternal twins (commonly known as “non-identical twins”) usually occur when two fertilised eggs are implanted in the uterine wall at the same time. The two eggs form two zygotes, and these twins are therefore also known as dizygotic as well as “binovular” twins.