Question 2.
List all the wastes that you generate, at home, school, or during your trips to other places. Could you very easily reduce the generation of these wastes? Which would be difficult or rather impossible to reduce?
Solution:
Wastes generated at home include plastic bags, paper napkins, toiletries, kitchen wastes (such as peelings of vegetables and fruits, tea leaves), domestic sewage, glass, etc.

Yes, wastes can be easily reduced by the judicious use of the above materials. Wastage of paper can be minimized by writing on both sides of the paper and by using recycled paper.

Plastic and glass waste can also be reduced by recycling and re-using. Also, substituting plastic bags with biodegradable jute bags can reduce wastes generated at home, school or during trips. Domestic sewage can be reduced by optimizing the use of water while bathing, cooking, and other household activities.

Non-biodegradable wastes such as plastic, metal, broken glass, etc. are difficult to decompose because microorganisms do not have the ability to decompose them.

Question 3.
Discuss the causes and effects of global warming. What measures need to be taken to control global warming?
Solution:

Question 5.
Write critical notes on the following :
(a) Eutrophication
(b) Biological magnification
(c) Groundwater depletion and ways for its replenishment
Solution:
(a) Eutrophication: The natural aging process of lakes by nutrient enrichment of their water. In young lake water is cold and clear and supports only little life. With time, streams introduce nutrients into lake which increases lakes’ fertility and encourages aquatic growth. Over centuries silts and organic debris pile up, and lake becomes shallow and warmer. It supports plants and later gets converted into land. Lakes span depends on the climate, size of lake.

(b) Biological magnification: Industrial wastes released into water contain toxic substances, such as arsenic, cadmium, lead, zinc, copper, mercury, and cyanides, besides some salts, acids, and alkalies. All these materials can prove harmful for our health. 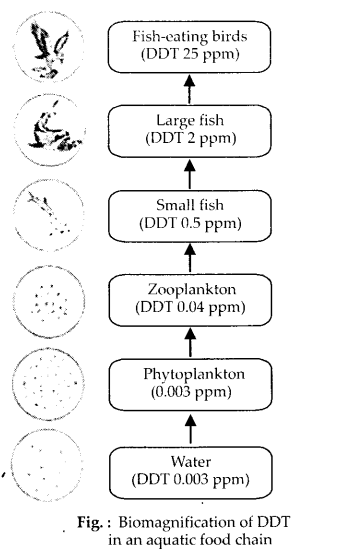 They may reach the human body directly with contaminated food or indirectly by way of plants and other animals. The concentration of the toxic materials increases at each trophic level of a food chain. This is called biological magnification. River water may have a very low concentration of DDT, but the carnivorous fish in that river may contain a high concentration of DDT and become unfit for eating by man. Mercury discharged into rivers and lakes is changed by bacteria to the neurotoxic form called methyl mercury. The latter is highly poisonous and may be directly absorbed by fish.

Question 6.
Why does the ozone hole form over Antarctica? How will enhanced ultraviolet radiation affect us?
Solution:
Ozone hole forms over Antarctica where no one lives and no pollution is present but not over Newyork, Bangalore etc., (polluted cities). It is because CFCs and ozone-depleting substances (ODS) released worldwide accumulates in the stratosphere and drifts towards, Antarctica in winters (July – August) when temperatures is -’85° C in Antarctica.

In winters polar ice clouds are formed over Antarctica. It provides a catalytic surface for (CFCs and other ODS to release CL and other free radicals that breakdown ozone layer forming an ozone hole during spring in presence of sunlight. In summer, the ozone hole disappears due to mixing of air worldwide.

Question 7.
Discuss the role of women and communities in protection and conservation of forests.
Solution:
Forest Conservation and Management:
It is time to think deeply and act seriously in order to protect this vital natural resource. Some of the measures of conservation are

Reforestation: It is the process of restoring a forest that once existed, but was removed at some point of time in the past. Reforestation may occur naturally in a deforested area. The above-said methods speed up the refor­estation programme.

Question 8.
What measures, as an individual, you would take to reduce environmental pollution?
Solution:
To reduce environmental pollution, we should change our habits and lifestyle so as to reduce the use of disposable materials. We should use preferably those items which can easily be recycled and also minimise the use of fossil fuels. We should also take measures to improve the quality of air by using CNG gases wherever possible instead of using diesel or petrol. We should also use the catalytic converter in our vehicles.

b. Irrepairble electronic goods and computers are called electronic wastes (e-waste).
Ships that are no longer in use or that are to be dismantled are called defunct ships. Asbestos, Polychlorinated Biphenyl (PCB) produced during dismantling defunct ship cause serious health hazards especially cancer.

c. Municipal solid wastes are wastes from homes, offices, stores, schools, hospitals, etc., that are collected and disposed of by the municipality.

Question 10.
What initiatives were taken for reducing vehicular air pollution in Delhi? Has air quality improved in Delhi?
Solution:
Under the direction of Supreme Court of India, the State Government of Delhi took the following measures to improve the quality of air:

Because of above mentioned measures adopted by the Government the air quality of Delhi has improved with a substantial fall in S02, CO, Nox level between 1997-2005.

However, recently the concentration of greenhouse gases has started rising to result in an enhanced greenhouse effect that is resulting in increasing the mean global temperature. It is called global warming. A regular assessment of the abundance of greenhouse gases and their impact on the global environment is being made by IPCC (Intergovernmental Panel on Climate Change). The various green house gases are CO2 (warming effect 60%), CH4 (effect 20%) , chlorofluorocarbons or CFCs (14%) andT nitrous oxide (N2O, 6%). Others of minor significance are water vapors and ozone.

(c) Ultraviolet B – UV-B having 280-320nm wavelength. Their harmful radiations penetrate through the ozone hole to strike the earth. On earth, these can affect human beings and other animals by causing :