Question 1.
Name the parts of an angiosperm flower in which development of male and female gametophyte take place.
Solution:
Inside the anther, the cells of microsporangia develop as male gamete. Inside the ovary megasporangial cells develop as female gametes. 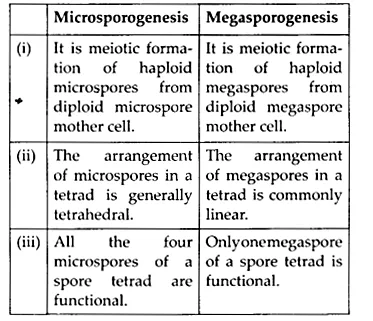 During microsporogenesis and Megas-megasporogenesis meiotic cell division occurs which results in haploid gametes – the microspores or pollen grains and megaspores.

Question 4.
With a neat, labelled diagram, describe the parts of a typical angiosperm ovule. 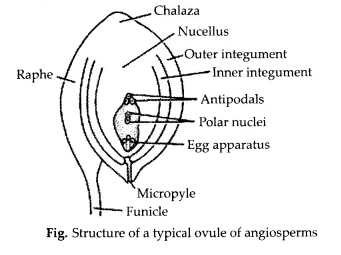 Solution:
An angiosperm ovule consists of the following parts:

Question 6.
With a neat diagram explain the 7-celled, 8 nucleate nature of the female gametophyte
Solution: 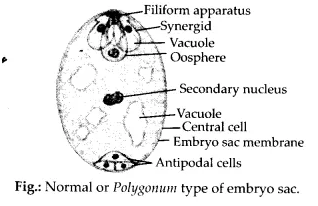 The female gametophyte (embryo sac) develops from a single functional megaspore. Thus, the megaspore undergoes three successive mitotic divisions to form 8 nucleate embryo sac. The first mitotic division in the megaspore forms 2 nuclei. One nucleus moves towards the micropylar end while the other nucleus moves towards the chalazal end. Then these nuclei divide at their respective ends and redivide to form 8 nucleate stages.

As a result there are 4 nuclei each at both the ends i.e., at the micropylar and the chalazal end in the embryo sac. At the micropylar end, out of 4 nuclei only 3 differentiate into 2 synergids and one egg cell. Together they are known as egg apparatus. Similarly, at the chalazal end 3 out of 4 nuclei differentiates as antipodal cells. The remaining 2 cells (of the micropylar and chalazal end) move towards the centre and are known as the polar nuclei, which are situated in the centre of the embryo sac. Hence, at maturity, the female gametophyte appears as a 7 celled structure, though it has 8 nucleate.

Question 9.
What is self-incompatibility? Why does self-pollination not lead to seed formation in self-incompatible species?
Solution:
When the pollen grains of an anther do not germinate on the stigma of the same flower, then such a flower is called self-sterile or incompatible and such condition is known as self¬incompatibility or self-sterility.
The transference of pollen grains shed from the anther to the stigma of the pistil is called pollination. This transference initiate the process of seed formation. Self-pollination is the transfer of pollen grain shed from the anther to stigma of pistil in the same flower. But in some flower self¬pollination does not lead to the formation of seed formation because of the presence of same sterile gene on pistil and pollen grain.

Question 10.
What is bagging technique? How is it useful in a plant breeding programme?
Solution:
It is the covering of female plants with butter paper or polythene to avoid their contamination from foreign pollens during the breeding programme.

Question 11.
What is triple fusion? Where and how does it take place? Name the nuclei involved in triple fusion.
Solution:
Inside the embryo sac, one male gamete fuses with egg cells to form a zygote (2n) and this is called syngamy or true act of fertilisation. This result of syngamy, i.e., zygote (2n) ultimately develops into an embryo.

The nuclei involved in this triple fusion are the two polar nuclei or secondary nucleus and the second male gamete.

Question 12.
Why do you think the zygote is dormant for sometime in a fertilised ovule?
Solution:
The zygote is dormant in fertilized ovule for some time because, at this time, endosperm needs to develop. As endosperm is the source of nutrition for the developing embryo, nature ensures the formation of enough endosperm tissue before starting the process of embryogenesis.

Question 15.
What is meant by emasculation? When and why does a plant breeder employ this technique?
Solution:
Emasculation is the removal of stamens mainly the anthers from the flower buds before their dehiscence. This is mainly done to avoid self-pollination. Emasculation is one of the measures in the artificial hybridization. Plant breeders employed this technique to prevent the pollination within same flower or to pollinate stigmas with pollens of desired variety.

Question 17.
Explain the role of tapetum in the formation of pollen-grain wall.
Solution:
Tapetum is the innermost layer of the microsporangium. The tapetal cells are multinucleated and polyploid. They nourish the developing pollen grains. These cells contain ubisch bodies that help in the ornamentation of the microspores or pollen grains walls. The outer layer of the pollen grain is called exine and is made up of the sporopollenin secreted by the ubisch bodies of the tapetal cells. This compound provides spiny appearance to the exine of the pollen grains.

Question 18.
What is apomixis and what is its importance ?
Solution:
Apomixis is the process of asexual production of seeds, without fertilization.
The plants that grow from these seeds are identical to the mother plant.