Question 1.
“All elements that are present in a plant need not be essential to its survival”. Comment.
Solution:
Plants obtain their inorganic nutrients from the air, water, and soil. Plants absorb a wide variety of mineral elements. Not all the mineral elements that they absorb are required by plants. Out of the more than 105 elements discovered so far, less than 21 are essential and beneficial for normal plant growth and development. The elements required in large quantities are called macronutrients. While those required in fewer quantities or in the trace are termed micronutrients. These elements are either essential constituents of proteins, carbohydrates, fats, nucleic acid, etc. and/or take part in various metabolic processes.

Question 2.
Why is the purification of water and nutrient salts so important in studies involving mineral nutrition using hydroponics?
Solution:
The technique of growing plants in a nutrient solution is known as hydroponics. Since a number of improvised methods have been employed to try and determine the mineral nutrients essential for plants. The essence on all these methods involves the culture of plants in a soil-free, defined mineral solution. These method require purified water and mineral nutrients salts. Purification of water and nutrient salt is important to find out other influencing factors

Question 3.
Explain with examples:
Macronutrients, micronutrients, beneficial nutrients, toxic elements, and essential elements.
Solution:
Based upon the criteria only a few elements have been found to be absolutely essential for plant growth and metabolism. These elements are further divided into two broad categories based on their quantitative requirements,

Macronutrients must generally be present in plant tissues in the concentration of 1 to 10 mg/L of dry matter. The macronutrients include carbon, hydrogen, oxygen, nitrogen, phosphorous, sulfur, potassium, calcium, and magnesium. Of these, carbon, hydrogen, and oxygen are mainly obtained from CO2, and H20, while the others are absorbed from the soil as mineral nutrition.

Micronutrients or trace elements are needed in very small amounts (equal to or less than 0.1 mg/L of dry matter). These include iron, manganese, copper, molybdenum, zinc, boron, chlorine, and nickel. In addition to the 17 essential elements named above, there are some beneficial elements such as sodium, silicon, cobalt, and selenium. They are required by higher plants.

Essential elements can also be grouped into four broad categories on the basis of their diverse functions. These categories are:
(1) Essentia] elements as components of biomolecules and hence structural elements of cells, (eg: carbon, hydrogen, oxygen, and nitrogen).

(2) Essential elements that are components of energy-related chemical compounds in plants, for example, magnesium in chlorophyll and phosphorous in ATP.

(4) Some essential elements can alter the osmotic potential of a cell. Potassium plays an important role in the opening and closing of stomata. Any mineral ion concentration in tissues that reduces the dry weight of tissues by about 10 percent is considered toxic. Such critical concentrations vary widely among different micronutrients. The toxicity symptom! are difficult to identify.

Toxicity levels for any element also vary for different plants. Many times excess of an element may inhibit the uptake of another element. For example, the prominent symptoms of manganese toxicity are the appearance of brown spots surrounded by chlorotic veins.

Question 4.
Name at least five different deficiency symptoms in plants. Describe them and correlate them with the concerned mineral deficiency.
Solution:

Question 5.
If a plant shows a symptom which could develop due to deficiency of more than one nutrient, how would you find out experimentally, the real deficient mineral element?
Solution:

Question 6.
Why is it that in certain plants deficiency symptoms appear first in younger parts of the plant while in other they do so in mature organs?
Solution:
The deficiency symptoms tend to appear first in the young tissues whenever the elements are relatively immobile and are not transported out of the mature organs, for example, elements like sulphur and calcium are a part of the structural component of the cell and hence are not easily released.

Question 7.
How are the minerals absorbed by the plants?
Solution:
Uptake of mineral ions, by plants, occurs through
two main phases.
Passive Absorption: It is the process of absorption of minerals through it’s outer space(Intercellular space and cell wall) by physical process. Direct expenditure of metabolic energy is not involved. A substance moves from a region of higher chemical potential to lower chemical potential. It occurs through ion channels (transmembrane protein). The theories to explain the movement of ions:
(a) Ion exchange: Both cation and anion gets absorbed on the surface of cell wall. The absorbed ions are exchanged with ions present in soil solution.
(b) Mass flow hypothesis: According to this hypothesis mass flow of ions occur along with absorption of water as a result of transpirational pull.
Active Absorption: It is the process of movement of ions against a concentration gradient, by utilizing ATP as energy. Both influx and efflux of ions are carried out by carrier mechanism. The activated ions combine with carrier proteins and form ion carrier complex. This complex moves
across all the membrane and reaches inner surface, where it breaks and releases ions into the cytoplasm.

Question 8.
What are the conditions necessary for the fixation of atmospheric nitrogen by Rhizobium? What is their role in nitrogen fixation?
Solution:
Rhizobia are unique because they live in a symbiotic relationship with legumes. Necessary conditions:

The reduction of nitrogen to ammonia by living organisms is called biological nitrogen fixation. The enzyme, nitrogenase which is capable of nitrogen reduction is present exclusively in prokaryotes. Several types of symbiotic biological nitrogen-fixing associations are known. The most common association on roots is nodules. Their role in N2– fixation is to supply the plants with nitrogenase that converts nitrogen to amino acids.

Question 9.
What are the steps involved in the formation of root nodule?
Solution:
Nodule formation involves a sequence of multiple interactions between Rhizobium and the roots of the host plant. Stages in the nodule formation are summarised as follows:
Steps in the development of root nodules:
(a) When a root hair of a leguminous plant comes in contact with Rhizobium, it is deformed due to the secretion from the bacterium.
(b) At the site of curling Rhizobia invades the root tissue and proliferate within root hairs.
(c) Some bacteria enlarge to form membrane-bound structures, bacteroids which cannot divide.
(d) The plants form the infection thread, made up of plasma membrane that grows inward, separating the infected tissue from the rest of the plant.
(e) Cell division is stimulated in the infected tissue and more bacteria invade the newly formed tissues.
(f) It is believed that a combination of cytokinin produced by invading bacteria and auxins produced by plant cells, promotes cell division and extension, leading to nodule formation.

Question 1.
Name the enzymes that reduce nitrogen in the root nodules of a bean plant.
Solution:
Nitrogenase.

Question 2.
Name the enzymes used in biologically nitrogen fixation. What are the mineral elements needed for the activity of the enzyme?
Solution:
Nitrogenase enzyme.

Question 3.
Name the enzyme that can reduce nitrogen to ammonia.
Solution:
Nitrogenase.

Question 4.
What is the importance of phosphorus for plants?
Solution:
Phosphorus is a constituent of cell membranes, certain proteins, all nucleic acids, and nucleotides, and is required for all phosphorylation reactions.

Question 8.
Name the element which is a limiting nutrient for both natural and agricultural ecosystems.
Solution:
Nitrogen.

Question 11.
What is hydroponics (Tank farming)?
Solution:
It is plant growth in the liquid culture medium.

Question 13.
What type of condition is created by leghaemoglobin in the root nodules of legumes?
Solution:
Anaerobic condition.

Question 15.
How are amides transported In plants?
Solution:
Amides are transported along with water through the xylem.

Question 16.
What is the function of the enzyme nitrite reductase?
Solution:
It reduces nitrate ions to ammonia.

Question 1.
What is nitrification?
Solution:
Questions It is the conversion of ammonium ion to nitrite and then to nitrate. Nitrosomonas converts ammonium into nitrites, Nitrobacter converts nitrites into nitrates.

Question 2.
Prior to sowing rice, a legume crop was cultivated and ploughed back in this field. Why? Explain.
Solution:
Leguminous plants possess root nodules in which the symbiotic bacteria Rhizobium fixes nitrogen. The fixed nitrogen makes the soil rich in nitrogen fertilizer where the leguminous plant is ploughed back into the field.

Question 3.
Name the organism that fixes nitrogen in symbiotic association with a legume. Where does it live in such plants?
Solution:
Rhizobium. It lives in the root nodules of leguminous plants.

Question 5.
Bring out at similarity and difference between leghaemoglobin and hemoglobin.
Solution: 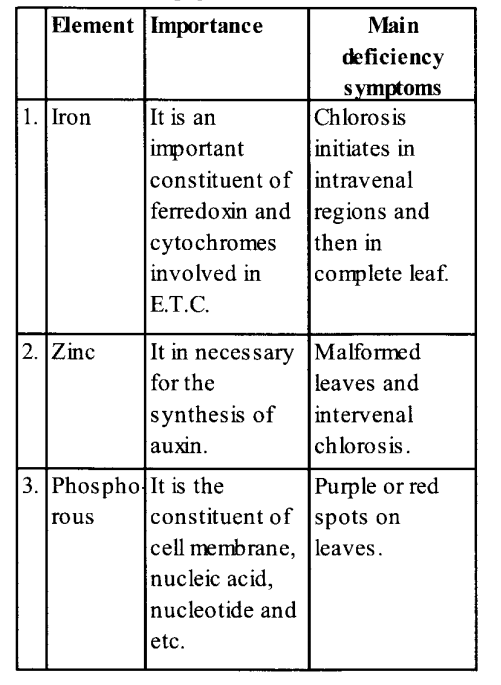 Question 8.
In what form is boron absorbed by plants from the soil? Mention its two uses in the plants and give two deficiency symptoms of boron in them.
Solution: 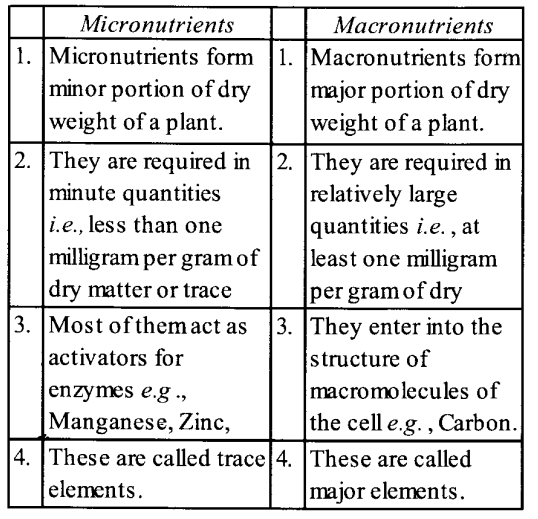 Question 1.
With the help of a suitable diagram describe the nitrogen cycle.
Solution:
Nitrogen cycle: Plants compete with microbes for the limited nitrogen that is available in the soil. Thus, nitrogen is a limiting nutrient for both natural and agricultural ecosystems. 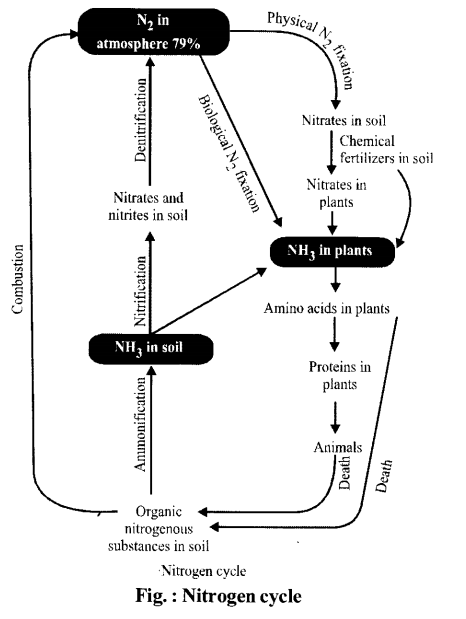 Question 2.
Name at least five different deficiency symptoms in plants. Describe them and correlate them with concerned mineral deficiency.
Solution:

Question 3.
Write notes on :
(a) Reductive animation
(b) Transamination
Solution:
(a) Reduction animation – In this process ammonia (formed by nitrogen assimilation) reacts with a ketoglutaric acid to form the amino acid – glutamic acid. Here ∝ – ketoglutaric acid comes from Kreb’s cycle and hydrogen is donated by co-enzyme NADH or NADPH.

(b) Transamination – Once the glutamic acid is synthesized by reductive amination, other amino acids are synthesized by the transfer of an amino groups to other carbon skeletons. Glutamic acid is the starting material from which 17 other amino acids are formed by the transfer of the amino group of an amino donor compound to the carboxyl position of an amino acceptor compound. Transaminase is the enzyme responsible for such a reaction.

(i) Constituents of the plant body: Elements form the constitution of the plant body. For example carbon, hydrogen and oxygen are essential for the production of carbohydrates hence they are termed framework elements. Nitrogen, sulphur, and phosphorus are required for the synthesis of proteins. Magnesium is an important part of the chlorophyll molecule.

(v) They have balancing function reactions: Some of the minerals balance the effects of the other.