Question 2.
Explain the autoregulatory mechanism of GFR.
Solution:
This mechanism in Kidney is present to regulate the glomerular filtrate rate.

Question 3.
Indicate whether the following statements are true or false :
(i) Micturition is carried out by a reflex.
(ii) ADH helps in water elimination, making the urine hypotonic.
(iii) Protein-free fluid is filtered from blood plasma into the Bowman’s capsule.
(iv) Henle’s loop plays an important role in concentrating the urine.
(v) Glucose is actively reabsorbed in the proximal convoluted tubule.
Solution:
(i) True
(ii) False
(iii) True
(iv) True
(v) True.

Question 5.
Describe the role of the liver, lungs and skin in excretion.
Solution:
Liver: This largest gland in our body, secretes bile-containing substances like bilirubin, biliverdin, cholesterol, degraded steroid hormones, vitamins and drugs. Most of these substances ultimately pass out along with digestive wastes.

Question 6.
Explain micturition.
Solution:
Urine formed by the nephrons is ultimately carried to the urinary bladder where it is stored till a voluntary signal is given by the central nervous system (CNS). This signal is initiated by the stretching of the urinary bladder as it gets filled with urine. In response, the stretch receptors on the walls of the bladder send signals to the CNS. The CNS passes on motor messages to initiate the contraction of smooth muscles of the bladder and simultaneous relaxation of the urethral sphincter causing the release of urine. The process of release of urine is called micturition and the neural mechanisms causing it is called the micturition reflex.

An adult human excretes on average, 1.5 liters of urine per day. The urine formed is a light yellow colored watery fluid that is slightly acidic (pH-6.0) and has a characteristic odor. On average, 25-30 gm of urea is excreted out per day. Various conditions can affect the characteristics of urine. Analysis of urine helps in the clinical diagnosis of many metabolic disorders as well as malfunctioning of the kidneys. For example, the presence of glucose (Glycosuria) and ketone bodies (ketonuria) in urine are indicative of diabetes mellitus.

Question 8.
What is meant by the term osmoregulation?
Solution:
Osmoregulation is the mechanism of maintaining water, blood, body fluid, and ionic (salt) balance in the body.

Question 9.
Terrestrial animals are generally either ureotelic or uricotelic, not ammonotelic, why?
Solution:
Land animals have an integument that is impervious to gas exchange. Ammonia is highly toxic and it has to be eliminated as rapidly as it is formed. It requires a large volume of water for its elimination. They do not have access to such a large volume of water needed for the elimination of ammonia. So, they are either ureotelic or uricotelic.

Question 12.
Fill in the gaps:

Question 2.
In which organ ammonia is converted to urea?
Solution:
Liver.

Question 4.
What is hemodialysis?
Solution:
The process of removal of excess urea from the blood of a patient (normally suffering from uremia) using an artificial kidney is known as hemodialysis

Question 5.
Define ketonuria.
Solution:
The presence of high ketone bodies in the urine is called ketonuria.

Question 6.
What are the columns of Bertini?
Solution:
These are the extension of the renal cortex between the medullary pyramids as renal columns.

Question 7.
In which part of the nephron does filtration take place?
Solution:
Bowman’s Capsule/Renal Corpuscle

Question 9.
Name the body part through which ammonia is eliminated in a bony fish.
Solution:
Gill membranes.

Question 10.
What is vasa recta ?
Solution:
The U-shaped peritubular capillary that runs parallel to the Henle’s loop is called vasa recta.

Question 13.
Why is glomerular filtration also called as ultrafiltration?
Solution:
Blood is filtered so finely through these membranes, that almost all the constituents of the plasma except the proteins pass onto the lumen of the bowman’s capsule. Therefore, it is considered as a process of ultrafiltration.

Question 14.
Name the mechanism that acts as a check for the Renin-angiotensin mechanism.
Solution:
Arterial Natriuretic Factor (ANF) Mechanism.

Question 15.
What is uremia?
Solution:
Uremia is a condition of excess accumulation of urea in the blood caused by the malfunctioning ofkidneys.

Question 16.
What term is given to the inflammation of glomerulus in nephron?
Solution:
Glomerulonephritis.

Question 17.
Which limb of loop of Henle is impermeable to water?
Solution:
Bowman’s capsule and glomerulus are collectively called malpighian body.

Question 1.
How does the proximal convoluted tubule of the nephron contribute to homeostasis?
Solution:
All essential nutrients and 70-80 percent of electrolytes and water are reabsorbed by the PCT segment. So it helps to maintain the pH and ionic balance of the body fluids by selective secretion of hydrogen ions, ammonia and potassium ions into the filtrate and by absorption of HCO3-” from it.

Question 2.
What are the functions of nephridia? Name an animal having protonephridia
Solution:
Nephridia help to eliminate nitrogenous wastes and maintain a fluid and ionic balance. Protonephridia are present in Amphioxus, Rotifers, Planaria, etc.

Question 3.
Kidney do not play a major role in excretion in ammonotelic animals. Justify.
Solution:
Ammonia is readily soluble in water and diffuses across the body surface.
In fish, it is excreted as ammonium ions through gill surface. So kidneys do not have any significant role in the elimination of ammonia.

Question 4.
What are the functions of ADH?
Solution:
(i) ADH facilites water absorption from the distal tubule.
(ii) It also affect kidney function by its constrictor effects also on blood vessels.

Question 5.
What is the ultimate method of correcting acute renal failure? Describe.
Solution:
Kidney transplantation is the ultimate method in the correction of acute renal failures (kidney failure). A functioning kidney is used in transplantation from a donor, preferably a close relative, to minimize its chances of rejection by the immune system of the host.

Question 7.
Why do persons suffering from very low blood pressure pass no urine?
Solution:
The blood passes into the glomerulus under high pressure during glomerular filtration. If blood pressure is less then it results in the failure of the ultrafiltration process in the glomerulus and hence, no urine formation occurs.

Question 9.
(a) The two human kidneys do not occur at the same level-explain.
(b) Why are Kidneys called retro-peritoneal?
Solution:
(a) Left kidney is slightly longer, narrower, median, and lies at a level 1.25 cm higher than the right kidney. The right kidney is lower in position due to the presence of the right lobe of the liver.
(b) Retroperitoneal. It is space that lies between the peritoneum and vertebral column, Kidneys occur in this space so that they are lined by peritoneum only on the ventral side. 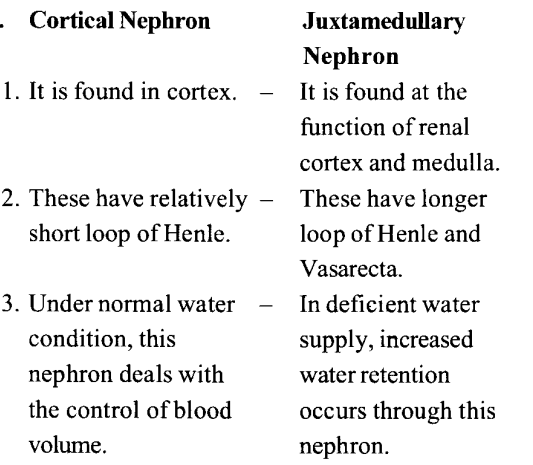 Question 11.
What is the chemical composition of human urine?
Solution:
Human urine is transparent, yellowish in colour and variable in chemical composition. It
consists primarily of water (95 %), with organic solutes including urea (2.6%), creatinine, uric acid, and trace amounts of enzymes, carbohydrates, hormones, fatty acids, pigments, and mucins, and inorganic ions such as Na+, K+, Cl– Mg2+, Ca2+, and phosphates.

Question 12.
What is Erythropoietin? What is its function?
Solution:
Erythropoietin is a glycoprotein hormone that controls erythropoiesis, or the formation of red blood cells. It acts as a cytokine (proteinsignaling molecule) for RBC precursor in bone marrow. It is produced by enterstitial fibroblasts in the kidney in close association with peritubular capillary and tubular epithelial tubule.

Question 1.
Describe the structure of the kidney.
Solution:

Question 2.
Describe the role of organs other than the kidney in the process of excretion in human beings.
Solution: