Question 1.
Draw the diagram of a sarcomere of skeletal.
Solution:

Question 3.
Describe the important steps in muscle contraction.
Solution:
Muscle contraction is initiated by a signal sent by the central nervous system (CNS) via a motor neuron. A motor neuron along with the muscle fibers connected to it constitutes a motor unit. The junction between a motor neuron and the sarcolemma of the muscle fiber is called the neuromuscular junction or motor-end plate. A neural signal reaching this junction releases a neurotransmitter (Acetylcholine) which generates an action potential in the sarcolemma. This spreads through the muscle fiber and causes the release of calcium ions into the sarcoplasm. An increase in Ca++ level leads to the binding of calcium with a subunit of troponin on actin filaments and thereby removes the masking of active sites for myosin.

Utilizing the energy from ATP hydrolysis, the myosin head now binds to the exposed active sites on actin to form a cross bridge. This pulls the attached actin filaments towards the center of the A-bonds. The Z-line attached to these actions is also pulled inwards thereby causing a shortening of the sarcomere i.e., contraction. It is clear from the above steps, that during shortening of the muscle i.e., contraction, the ‘I’ bonds are getting reduce whereas the A-bonds are retaining the length. The myosin, releasing the ADP and p1 goes back to its relaxed state.

A new ATP binds and the cross-bridge is broken. This causes the return of Z-lines back to their original position i.e., relaxation. The reaction time of the fibers can vary in different muscles. Repeated activation of the muscles can lead to the accumulation of lactic acid due to the anaerobic breakdown of glycogen in them, causing fatigue. Muscle contains a red-colored oxygen storing pigment called myoglobin. Myoglobin content is high in some of the muscles which gives a reddish appearance. Such muscles are called the Red muscles. These muscles also contain plenty of mitochondria which can utilize a large amount of oxygen stored in them for ATP production.

These muscles, therefore, can also be called aerobic muscles. On the other hand, some of the muscles possess a very little quantity of myoglobin and therefore, appear pale or whitish. These are the white fibers. The number of mitochondria is also few in them, but the amount of sarcoplasmic reticulum is high. They depend on the anaerobic process for energy.

Question 4.
Write true or false. If false, change the statement so that it is true.

Question 5.
Write the differences between.
(a) Actin and Myosin
(b) Red and White muscles
(c) Pectoral and Pelvic girdle
Solution:
(a) Differences between actin and myosin are as following;

(b) The main difference between red muscles and white muscles are as following :

(c) The main difference between the pectoral girdle and pelvic girdle are as following:

Question 7.
What are the different types of movements exhibited by the cells of the human body?
Solution:
Cells of the human body exhibit three main types of movements, namely, amoeboid, ciliary and muscular. Some specialized cells in our body like macrophages and leucocytes in blood exhibit amoeboid movement. It is affected by pseudopodia formed by the streaming of protoplasm (as in Amoeba). Cytoskeletal elements like microfilaments are also involved in the amoeboid movement.

Ciliary movement occurs in most of our internal tubular organs which are lined by ciliated epithelium. The coordinated movements of cilia in the trachea help us in removing dust particles and some of the foreign substances inhaled along with the atmospheric air. Passage of ova through the female reproductive tract is also facilitated by the ciliary movement. Movement of our limbs, jaws, tongue, etc, requires muscular movement. The contractile property of muscles is effectively used for locomotion and other movements by human beings and the majority of multicellular organisms. Locomotion requires a perfect coordinated activity of muscular, skeletal, and neural systems. 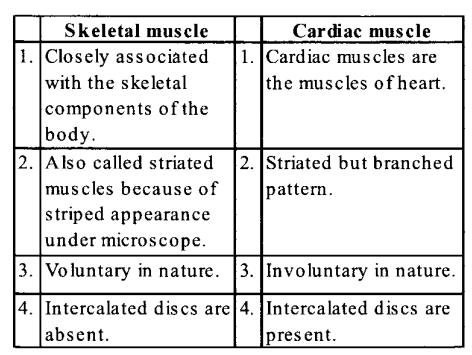 Question 9.
Name the type of joint between the following:
(a) Atlas/Axis
(b) Carpal/metacarpal of the thumb
(c) Between phalanges
(d) Femur/acetabulum
(e) Between cranial bones
(f) Between pubic bones in the pelvic girdle
Solution:
(a) Pivot joint
(b) Saddlejoint
(c) Gliding joint
(d) Ball and socket joint
(e) Fibrous joint
(f) Cartilagenousjoint

Question 1.
What causes gouty arthritis in humans?
Solution:
Gouty arthritis (= Gout) is caused either due to excessive formation of uric acid or inability to excrete it.

Question 2.
How many tarsals are there in the ankle?
Solution:
Seven.

Question 3.
What are the bones of the heel called?
Solution:
Metatarsals.

Question 5.
Name the lubricant which is responsible for the movable joint at the shoulder.
Solution:
Synovial fluid.

Question 6.
Give two disorders of skeleton and joints.
Solution:
Arthritis and Osteoporosis.

Question 7.
Mention two sites on all bodies where striated muscles are present.
Solution:
Limbs and tongue.

Question 8.
Name the two filaments which form the cross-bridges during muscle contraction?
Solution:
Actin and myosin.

Question 10.
How many ribs are present in adult men?
Solution:
Twelve pairs.

Question 11.
Name the single U-shaped bone present at the base of the buccal cavity.
Solution:
Hyoid.

Question 12.
Name the location where Z-line is present in the sarcomere.
Solution:
Centre of I band.

Question 14.
Name the kind of joint which permits movements in a single plane only.
Solution:
Hinge joint.

Question 17.
What is acromion?
Solution:
It is a flat expanded process projecting from the spine of the scapula; the clavicle articulates with it.

Question 18.
What is arthritis?
Solution:
Arthritis is painful stiffness and inflammation of joints.

Question 19.
What is sarcomere?
Solution:
A sarcomere is a structural unit within a microfibril bounded by Z lines that contain actin and myosin.

Question 1.
What causes osteoporosis?
Solution:
Osteoporosis is a disease in which bone loses minerals and fibres from its matrix. There are more chances of fractures. Decreased level of estrogen is a common cause.

Question 3.
Name the major components of the appendicular skeleton.
Solution:
It is situated at the lateral sides which actually extend outwards from the principal axis. It consists of pectoral and pelvic girdles and bones of arms and legs.

Question 5.
Differentiate between A and I bands.
Solution:
The main differences between A-band and I-band are as following : 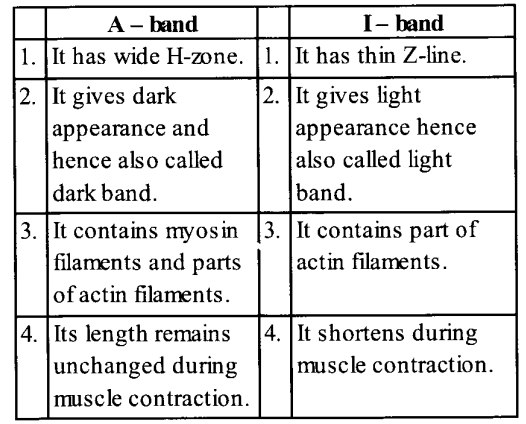 Question 6.
Draw the labeled diagram of the pectoral girdle and upper arm.
Solution: 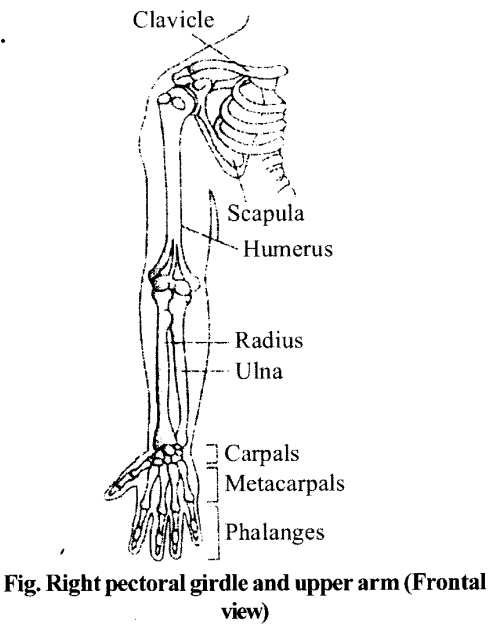 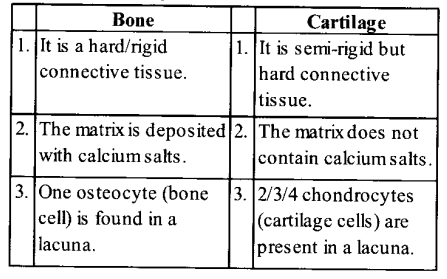 Question 9.
How muscular contraction is triggered?
Solution:
It is triggered by nerve releasing a neurotransmitter, which in turn triggeres the sarcoplasmic reticulum to release calcium ions into muscle interior. Where they bind to troponin, thus causing tropomyosin to shift from the face of the actin filament to which myosin heads need to produce a contraction. 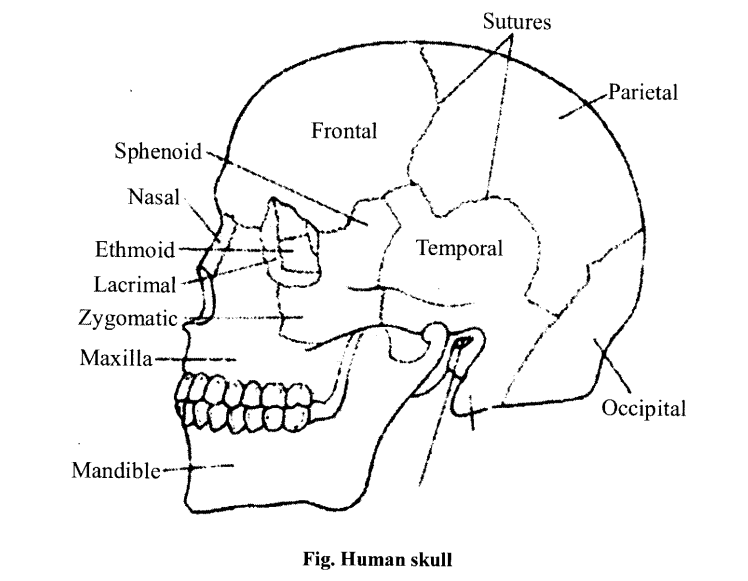 Question 2.
Write short notes on:
(a) Muscular dystrophy
(b) Tetany
(c) Myasthenia gravis
Solution:
Muscular dystrophy
The abnormality of muscles associated with dysfunction and ultimately deterioration is called muscular dystrophy. It is a genetic disorder caused by lack of dystrophin.
Myasthenia gravis: It is an auto-immune disorder that affecting neuromuscular junction and leads to fatigue, weakening, and paralysis of skeletal muscles. ‘
Tetany: The rapid spasm and (wild contractions) is called tetany. In this case, the muscles do not get a chance to relax at all. It is caused due to deficiency of parathyroid hormone and thus lowering Ca++ in blood fluid. 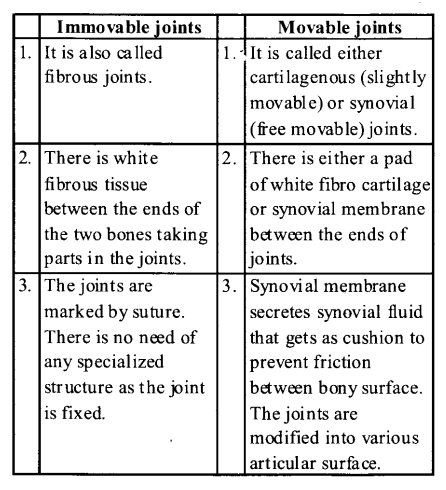 Question 4.
Describe the structure of the rib cage of a human.
Solution:
Rib Cage: There are 12 pairs of ribs. Each rib is a thin flat bone connected dorsally to the vertebral column and ventrally to the sternum. It has two articulation surfaces on its dorsal end and is hence called bicephalic. First, seven pairs of ribs are called true ribs.

Dorsally, they are attached to the thoracic vertebrae and ventrally connected to the sternum with the help of hyaline cartilage. The 8th, 9th, and 10th pairs of ribs do not articulate directly with the sternum but join the seventh rib with the help of hyaline cartilage. These are called vertebrochondral (false) ribs. The last 2 pairs (11th and 12th) of ribs are not connected ventrally and are, therefore, called floating ribs. Thoracic vertebrae, ribs, and sternum together form the rib cage. 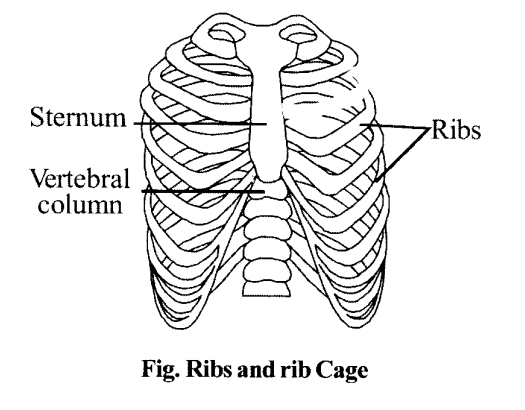