Question 1.
Name the components of formed elements in the blood and mention one major function of each of them.
Solution:
Blood is a mobile connective tissue composed of a fluid, the plasma and formed elements.
Formed elements includes erythrocytes, leucocytes and platelets.

Blood corpuscles.
(a) Erythrocytes are the most prevalent corpuscles (approx. 5 to5.5 million/mm3 of blood). They contain carbonic anhydrase enzymes which help in the transportation ofCO2 and haemoglobin pigment which helps in the transportation of O2.
(b) Leucocytes lack any pigment and most active motile constituents of blood (approx. 6000-8000/ mm3 of blood). They may be of two types.
1. Granulocytes are the cells containing granules and a polymorphic nucleus.

2. Agranulocytes are cells which lack granules

(c) Platelets: There are involved in the coagulation or clotting of blood.

Question 2.
What is the importance of plasma proteins?
Solution:
Fibrinogen, globulins and albumins are the major plasma proteins. Fibrinogen are needed for clotting or coagulation of blood. Globulins primarily are involved in defense mechanisms of the body. Albumins help in osmotic balance.

Question 4.
Why do we consider blood as a connective tissue?
Solution:
Blood is a special connective tissue consisting of a fluid matrix, plasma, and the formed elements. It is circulated throughout the body.

Question 5.
What is the difference between lymph and blood?
Solution:
Differences between blood and lymph are as following :

(b) Differences between open and closed systems of circulation are as following :

(c) Differences between systole and diastole are as following :

(d) Differences between P-wave and T-wave are as following :

Question 8.
Describe the evolutionary change in the pattern of heart among the vertebrates.
Solution:

Question 9.
Why do we call our heart myogenic?
Solution:
Normal activities of the heart are regulated intrinsically i.e., auto regulated by specialised muscles, hence our heart is called myogenic.

Question 10.
The sino-atrial node is called the pacemaker of our heart. Why?
Solution:
The SA node is located in the wall of right auricle slightly below the opening of the superior vena cava. It has a unique property of self-excitation which enables it to act as the pacemaker of the heart. It spontaneously initiates a wave of contraction which spreads over both the auricles more or less simultaneously along the muscle fibres.

Question 14.
Draw a standard ECG and explain the different segments in it.
Solution:
The recording of electrical potential generated by the spread of cardiac impulse is called an electrocardiogram (ECG).

ECG is the graphic record of electronic current produced by the excitation of cardiac muscles.

Question 1.
What is the Coagulation of Blood?
Solution:
When blood has been shed, it quickly becomes sticky and soon sets as a red jelly. This jelly or clot contracts or shrinks, and a straw-colored fluid called serum is squeezed out from it.

Question 3.
What is the role of basophils in human body?
Solution:
Basophils are significant in allergic reactions.

Question 4.
Write down the main function of neutrophils.
Solution:
Neutrophils are mainly responsible for protection against infection.

Question 5.
What are the functions of lymphocytes?
Solution:
Lymphocytes play an important role in cell- mediated immunity.

Question 6.
What is tunica externa?
Solution:
Tunica externa is the outermost layer of blood vessels (artery and vein) made up of fibrous connective tissue with collagen fibres.

Question 7.
Mention the function of pericardial fluid.
Solution:
Pericardial fluid keeps the surface of heart moist and prevents the friction between heart wall and surrounding tissues.

Question 11.
Name the type of granulocytes that play an important role in detoxification.
Solution:
Eosinophils.

Question 14.
Name the reptile that has a four-chambered heart
Solution:
Crocodile.

Question 15.
What are Purkinje fibres?
Solution:
The minute branches of the right and left AV-bundles, that are found throughout the ventricular musculature of the respective sides, are called Purkinje fibres.

Question 17.
What is the main symptom of heart failure?
Solution:
Congestion of the lungs.

Question 19.
Which is the valve present in between the left auricle and left ventricle? (April 97, M.Q.P.)
Solution:
The Bicuspid or mitral valve.

Question 20.
Which human organ is known as the “graveyard of RBCs”?
Solution:
Spleen.

Question 1.
What are thrombocytes? Where are they produced in the human body?
Solution:
Thrombocytes or blood platelets are colourless formed elements of blood which appear round, or biconvex, or irregular and helps in clotting of blood. They are produced from the megakaryocytes (special cells in the bone marrow).

Question 2.
What is a serum?
Solution:
Serum is straw coloured fluid left after the clotting of blood. It is also called blood serum.

Question 3.
Name the different types of granulocytes. Give the function of the one of which constitutes the maximum percentage of total leucocytes.
Solution:
Granulocytes are of three types neutrophils, eosinophils, basophils.
Neutrophils constitute the maximum percentage of the total leucocyte, mainly responsible for protection against infection. They engulf the foreign substances by phagocytosis.

(ii) The blood flows under pressure so that all parts of the body receive blood with equal efficiency.
(iii) It transports materials efficiently.
(iv) There are checks for the regulation of the amount and speed of blood passing into an organ according to the requirement of that organs.

Question 5.
Name a portal system present in man. Write its one function.
Solution:
Hepatic portal system.
Significance: The blood which comes from the alimentary canal contains digested food like glucose and amino acids. The excess of glucose is converted into glycogen which is stored in the liver for later use.

Question 6.
Write down the functions of lymph.
Solution:
Functions of lymph :
(i) Lymph acts as a ‘middle man’ which transports oxygen, food materials, hormones etc. to the body cells and brings carbon dioxide and other metabolic wastes from body cells to blood.
(ii) It keeps the body cell moist.
(iii) It maintains the volume of blood.
(iv) It absorbs and transports fat and fat-soluble vitamins from the intestine.

Question 7.
Explain the chemical events taking place during clotting /coagulation of blood.
(Foreign 1997)
Solution:
An injury or a trauma stimulates the plate- 195 lets in the blood to release certain factors which activate the mechanism of coagulation. Clot or coagulam informed mainly of network threads called fibrils in which dead and damaged formed elements of blood are trapped. Fibrins are formed by the conversion of inactive fibrinogens in the plasma by the enzyme thrombin.

Thrombins, in turn are formed from another inactive substance present in the plasma called prothrombin. An enzyme complex, thrombokinase, is required for the above reaction which is formed by a series of linked enzymic reactions involving a number of factors present in the plasma in an inactive state. Calcium ions play a very important role in clotting.

Question 8.
What is an average number of thrombocytes in human blood? What is their function?
Solution:
1,50,000 to 3,50,000 platelets/mm3 of blood
– They release substances that are concerned with the clotting of blood.

Question 9.
How many chambers are present in the heart of a fish? Name them.
Solution:
There are two chambers one atrium and one ventricle. ,

Question 11.
Where and from which cells do platelets originate? What is their life span? How do they act when blood vessels get injured?
Solution:
Platelets originate from the megakaryocytes in the bone marrow.

Question 12.
Explain any three disorders of the circulatory system.
Solution:
(i) High Blood Pressure (Hypertension):
Hypertension is the term for blood pressure that is higher than normal (120/80). High blood pressure leads to heart diseases and also affects vital organs like the brain and kidney.

(iii) Heart Failure:
Heart failure means the state of the heart when it is not pumping blood effectively enough to meet the needs of the body. The main symptoms are congestion of the lungs.

Question 13.
What is Arteriosclerosis? What are its causes?
Solution:
It is thickening, hardening and loss of elasticity of the wall of arteries. This process progressively
restricts the blood flow to one’s organs and tissues and can lead to severe health risks. It is caused by the build-up of fatty plaque, cholestrol and some other substances in and on the artery wall.

Question 14.
Define Vagus escape.
Solution:
The stimulation of vagus nerve decreases the heart rate but its continuous stimulation shows no further decrease. This is known as vagus escape.

Question 15.
What is erythroblastosis foetalis? How it occurs?
Solution:
It is a type of haemolytic disease of new-borns due to ABO blood type A, B, or O is not compatible with blood group of foetus. It develops in a foetus, when IgG molecules produced by the mother passes through the placenta.

Question 1.
Briefly explain the cardiac cycle.
Solution:
The sequential event in the heart which is cyclically repeated is called the cardiac cycle and it consists of systole and diastole of both the atria and ventricles. Initially, all the four chambers of the heart are in a relaxed state, i.e., joint diastole. Tricuspid and bicuspid valves are open resulting in the inflow of blood into the left and right ventricles from pulmonary veins and vena cava. Semilunar valves are closed at this stage. SAN (sino-atrial node) generates an action poten­tial resulting in simultaneous contraction of both atria – the atrial systole.

The action potential is conducted to the ventricular side by the AVN and AV bundle from where the bundle of His transmits it through the entire ventricular musculature. This causes contrac­tion of ventricles (ventricular systole) and relaxation of atria (diastole). Ventricular Systole increases the ventricular pressure causing the closure of tricuspid and bicuspid valves. As pressure increases, the semilunar valves of the pulmonary artery and aorta are forced open, allowing blood to flow through them into circulatory pathways.

The ventricles now relax (ventricular diastole) and semilunar valves close. As the ventricular pressure declines further, tricuspid and bicuspid valves are pushed open by the pressure in the atria. The blood now once again moves freely to the ventricles. The ventricles and atria are now again in a relaxed (joint diastole) state, as ear­lier and the process continue. The duration of a cardiac cycle is 0.8 sec­onds and during this period each ventricle pumps about 70 ml of blood.

Question 2.
(a) Draw the L. S. of a human heart showing the internal structure. Label the parts of the left side of the heart and the blood vessels that enter and leave the chambers of the same side.
(b) What is the significance of the remnant of sinus venosus in the mammalian heart?
Solution:
(a) 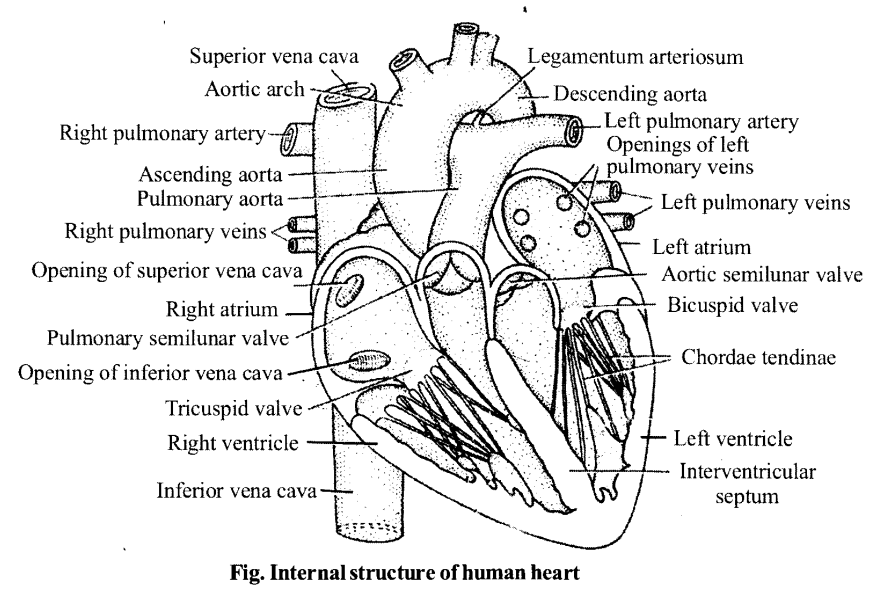 (b) It is believed that the remnant of sinus venous is modified into a sino-atrial node (SA Node) in the mammalian heart which is nothing but a mass of neuromuscular tissue laying in the wall of right atrium near the openings of the superior vena cava. It originates impulses for the regulation of the heartbeat. Thus acts as the pacemaker of heart.

Question 3.
Describe briefly the steps involved in the coagulation of blood at the site of injury of a blood vessel.
Solution:

Question 4.
Why is it necessary to check the Rh-factor of the blood of a pregnant woman?
Solution:
Rh-Factor