Question 2.
Diagrammatically indicate the location of the various endocrine glands in our body.
Solution: 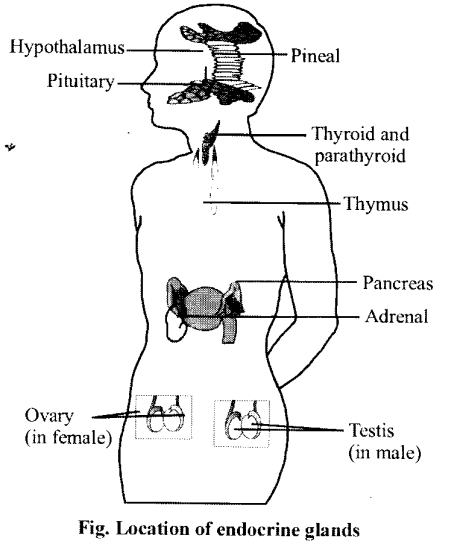 Question 5.
Write short notes on the functions of the following hormones:
(a) Parathyroid hormone (PTH)
(b) Thyroid hormones
(c) Thymosins
(d) Androgens
(e) Estrogens
(f) Insulin and Glucagon
Solution:
(a) The secretion of PTH is regulated by the circulating levels of calcium ions. Parathyroid hormone (PTH) increases the Ca2+ levels in the blood. PTH acts on bones and stimulates the process of bone resorption. PTH also stimulates reabsorption of Ca2+ by the renal tubules and increases Ca2+ absorption from the digested food. PTH is a hypercalcemic hormone, i.e., it increases the blood Ca2+ levels. Along with TCT, it plays a significant role in calcium balance in the body.

(b) Thyroid hormones play an important role in the regulation of the basal metabolic rate. These hormones also support the process of red blood cell formation. Thyroid hormones control the metabolism of carbohydrates, proteins, and fats. Maintenance of water and electrolyte balance is also influenced by thyroid hormones. The thyroid gland also secretes the protein hormone thyrocalcitonin (TCH) which regulates blood calcium levels.

(c) Thymosins play a major role in the differentiation of T – lymphocytes, which provide cell-mediated immunity. In addition, thymosins also promote the production of antibodies to provide humoral immunity.

(f) Glucagon is a peptide hormone, and plays an important role in maintaining normal blood glucose levels. Glucagon acts mainly on the liver cells and stimulates glycogenolysis resulting in increased blood sugar. In addition, this hormone stimulates the process of gluconeogenesis which also contributes to hyperglycemia. Glucagon reduces cellular glucose uptake and utilisation. Thus, glucagon is a hyperglycemic hormone.

Insulin is a peptide hormone, which plays a major role in the regulation of glucose homeostasis. Insulin acts mainly on hepatocytes and adipocytes and enhances cellular glucose uptake and utilisation. As a result, there is a rapid movement of glucose from blood to hepatocytes and adipocytes resulting in decreased blood glucose levels (hypoglycemia). Insulin also stimulates conversion of glucose to glycogen in the target cells. The glucose homeostasis in the blood is thus maintained jointly by the two insulin and glucagons.

Question 8.
Briefly mention the mechanism of action of FSH.
Solution:
Follicle-stimulating hormone (FSH) and LH Stimulate gonadal activity. In males, FSH and androgens regulate spermatogenesis. In females, FSH is responsible for the growth and development of the ovarian follicles, maturation of egg, and secretion of estrogens

Question 17.
Why is oxytocin called as birth hormone ?
Solution:
Oxytocin stimulates the contraction of smooth muscles of uterus and facilitates the child birth.

Question 18.
Why is vasopressin known as antidiuretic hormone?
Solution:
Vasopressin stimulates the reabsorption of water and electrolytes and reduces the loss of water through urine, known as diuresis. Hence it is called as anti-diuretic hormone.

Question 19.
What is cretinism ?
Solution:
Cretinism is reduction in body growth as well as underdevelopment of brain resulting in various structural and functional defects mainly due to deficiency of thyroxine (hypothyroidism) in infants and children.

Question 3.
Name the principal mineralocorticoid secreted by adrenal cortex. Give its any two functions
Solution:
Aldosterone is main mineralocorticoid secreted by adrenal cortex.
Functions of aldosterone are :
• It stimulates reabsorption of Na+ and water.
• It stimulates excretion of K+ and phosphate ions.

Question 4.
What are hormone receptors? What are the modes of their action ?
Solution:
Receptors are specific proteins present on the surface of target cell which bind with hormones and produce physiological changes in cell. Their are two types of hormone receptors which are discussed below:

Question 6.
Where is thymus gland located in the human body ? Describe its role.
Solution:
The thymus gland is a lobular structure located on the dorsal side of the heart and the aorta.
– It secretes hormone thymosin, which has a stimulating effect on the immune system.
– Thymosin promotes proliferation and maturation of T-lymphocytes.

Question 7.
How does insulin act on high glucose content in the blood in a normal human body ?
Solution:
• Insulin is a peptide hormone, which plays a major role in the regulation of glucose homeostasis. Insulin acts mainly on hepatocytes and adipocytes (cells of adipose tissue), and enhances cellular glucose uptake and utilisation. As a result, there is a rapid movement of glucose from blood to hepatocytes and adipocytes resulting in decreased blood glucose levels (hypoglycemia)
• Insulin also stimulates conversion of glucose to glycogen (glycogenesis) in the target cells.
• The glucose homeostatasis in blood is thus maintained jointly by the two enzyme insulin and glucagon.

Question 8.
What is corpus luteum ? Name its one secretion.
Solution:
Corpus luteum is the structure formed by the ruptured ovarian follicles after ovulation.
– It mainly secretes the hormone progesterone.

Question 1.
Explain briefly the structure and functions of middle ear.
Solution:
Calcitonin (from thyroid) : Essential for maintaining bone strength as it does not allow calcium mobilisation from bones. It also lowers plasma level of calcium ifthe same is high. Parathormone: Low level of parathormone secretion decreases blood plasma level of calcium, prevents reabsorption from bones and causes tetany. Higher levels of parathormone (PTH) increase plasma level of Ca2+ by withdrawal from bones resulting in (i) Inflammation and tenderness in bones due to dissolution of calcium from bones, formation of cavities which get plugged with fibrous nodes and cysts (osteitis fibrosa cystica) making bones soft deformed and prone to fracture, (ii) Excess plasma calcium gets deposited in various parts of body which often leads of obstruction and death.

Question 2.
Draw a well labelled diagram showing the location of parathyroid gland. Discuss the function/(s) of parathormone and hyperparathyroidism.
Solution: 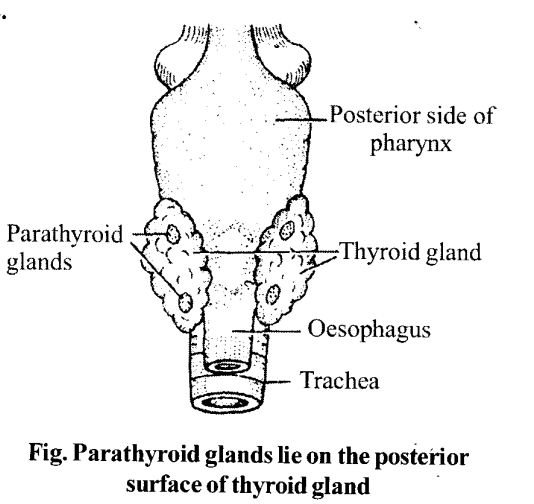 Function : Parathormone (Collip’s hormone) regulates the metabolism of calcium and phosphate between blood and other tissue.
(i) Hyperparathyroidism : It leads to demineralisation resulting in softing and bending of bones. An excess of parathormone cause osteoporosis and kidney stones.