Question 3.
In Mendeleev’s Periodic Table, gaps were left for the elements to be discovered later. Which of the following elements found a place in the periodic table later ?
(a) Germanium
(b) Chlorine
(c) Oxygen
(d) Silicon.
Answer:
(a). The element was called Eka-silicon.

Question 10.
Which of the following is the outermost shell for elements of period 2 ?
(a) K shell
(b) L shell
(c) M shell
(d) N shell
Answer:
(b). In second (2) period, the electrons are filled in second shell also known as L-shell.

Question 11.
Which one of the following elements exhibits maximum number of valence electrons ?
(a) Na
(b) Al
(c) Si
(d) P
Answer:
(d). The element phosphorus (P) has five electrons (2, 5) in the valence shell.

Question 20.
Three elements B, Si and Ge are
(a) metals
(b) non-metals
(c) metalloids
(d) metal, non-metal and metalloid respectively.
Answer:
(c). is the correct answer. These are also called semi-metals and possess the characteristics of both metals and non-metals.

Question 23.
Which one of the following depicts the correct representation of atomic radius (r) of an atom ? 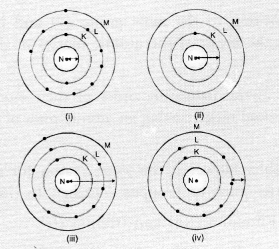 Question 24.
Which one of the following does not increase while moving down the group of the periodic table ?
(a) Atomic radius
(b) Metallic character
(c) Valence
(d) Number of shells in an element.
Answer:
(c). In a group, the valence or valency does not change since all the elements present have same valence shell configuration.

Question 25.
On moving from left to right in a period in the periodic table, the size of the atom
(a) increases
(b) decreases
(c) does not change appreciably
(d) first decreases and then increases
Answer:
(b). Atomic size decreases along a period. However, the noble gas atom is an exception. It has very large size.

Question 27.
The three elements A, B and C with similar properties have atomic masses X, Y and Z respectively. The mass of Y is approximately equal to the average mass of X and Z. What is such an arrangement of elements called as ? Give one example of such a set of elements.
Answer:
The arrangement is known as Dobereiner’s triad. For example, Calcium (Ca), Strontium (Sr) and Barium (Ba).

Question 28.
Elements have been arranged in the following sequence on the basis of their increasing atomic masses.
F, Na, Mg, Al, Si, P, S, Cl, Ar, K
(a) Pick two sets of elements which have similar properties.
(b) The given sequence represents which law of classification of elements ?
Answer:
(a) The elements that have similar properties belong to the same group. From the list of elements available, elements which belong to same group are : .
Na, K (Alkali metals) ; F, Cl (Halogens)
(b) The sequence is according to Newland’s law of octaves.

Question 30.
In Mendeleev’s Periodic Table, the elements were arranged in the increasing order of their atomic masses. However, cobalt with atomic mass of 58.93 amu was placed before nickel having an atomic mass of 58.71 amu. Give reason for the same.
Answer:
This is regarded as a defect in the Mendeleev’s periodic table. However, the main reason for making the arrangement was that the elements with similar characteristics must be grouped together. In this case,
• Cobalt (Co) should be in the company of the elements Rhodium (Rh) and Iridium (Ir).
• Nickel (Ni) should be in the company of the elements Palladium (Pd) and Platinum (Pt).

Question 31.
“Hydrogen occupies a unique position in Modern Periodic Table”. Justify the statement.
Answer:
The position of the element hydrogen is still not clear even in the Modern Periodic Table.
• In electronic configuration, it resembles alkali metals of group 1. All of them have only one electron in the valence shell. Actually, hydrogen has only one shell (K-shell) which has one electron. However, it is not a metal whereas alkali-metals are metallic in nature.
• In characteristics, it resembles halogens of group 17. For example, like halogens hydrogen is a non-metal and diatomic as well.
It has been therefore, decided to assign hydrogen a unique position in the Modern or Long Form. Periodic Table. It is placed at the top in group 1 of alkali metals. However, it is not a member of that group.*

Question 33.
Three elements A, B and C have 3, 4 and 2 electrons respectively in their outermost shell. Give the group number to which they belong in the Modern Periodic Table. Also, give their valencies.
Answer:
The electrons present in the outermost shell are also known as valence electrons. The desired information is given :

Question 35.
Compare the radii of two species X and Y. Give reasons for your answer.
(a) X has 12 protons and 12 electrons
(b) Y has 12 protons and 10 electrons
Answer:
The available information makes it clear that :
(a) Species X with equal number of protons (12) and electrons (12) is an atom.
(b) Species Y with two electrons less (10) than the number of protons (12), is a divalent cation y2+ of species X.
Therefore, the radius of species X is more as compared to that of y2+.
Note : The radius of cation is always less than that of atom while that of anion is more.

Question 42.
An element placed in 2nd group and 3rd Period of the Periodic Table, burns in the presence of oxygen to form a basic oxide.
(a) Identify the element
(b) Write the electronic configuration
(c) Write the balanced equation when it burns in the presence of air
(d) Write a balanced equation when this oxide is dissolved in water
(e) Draw the electron dot structure for the formation of this oxide
Answer:
(a) The element is magnesium (Mg).
(b) The electronic configuration is 2, 8, 2.
(c) Magnesium burns in oxygen (air) to form magnesium oxide which is of basic nature.
2Mg(s) + O2(g) ————-> 2MgO(s)
(d) Magnesium hydroxide is formed.
MgO(s) + H2O(aq) ————> Mg(OH)2(s)

Question 43.
An element X (atomic number 17) reacts with an element Y (atomic number 20) to form a divalent halide.
(a) Where in the Periodic Table are elements X and Y placed ?
(b) Classify X and Y as metal(s), non-metal(s) or metalloid(s).
(c) What will be the nature of oxide of element Y ? Identify the nature of bonding in the compound formed
(d) Draw the electron dot structure of the divalent halide.
Answer:
Element X (Z = 17) is chlorine while element Y (Z = 20) is calcium.
(a) Chlorine (Cl) is a member of group 17 and period 3. Calcium (Ca) is present in group 2 and period 4.
(b) Chlorine is a typical non-metal while calcium is a metal.
(c) The oxide of calcium is calcium oxide (CaO). It is a basic oxide. Question 46.
Complete the following cross word puzzle
Across :
(1) An element with atomic number 12.
(3) Metal used in making cans and member of Group 14.
(4) A lustrous non-metal which has 7 electrons in its outermost shell.
Down :
(2) Highly reactive and soft metal which imparts yellow colour when subjected to flame and is kept in kerosene.
(5) The first element of second period
(6) An element which is used in making fluorescent bulbs and is second member of group 18 in the Modern Periodic Table.
(7) A radioactive element which is the last member of the halogen family.
(8) Metal which is an important constituent of steel and forms rust when exposed to moist air.
(9) The first metalloid in Modern Periodic Table whose fibres are used in making bullet proof vests.

Question 49.
An element X which is a yellow solid at room temperature shows catenation and allotropy. X forms two oxides which are also formed during the thermal decomposition of ferrous sulphate crystals and are the major air pollutants.
(a) Identify the element X.
(b) Write the electronic configuration of X.
(c) Write the balanced chemical equation for the thermal decomposition of ferrous sulphate crystals.
(d) What would be the nature (acidic/basic) of oxides formed ?
(e) Locate the position of the element in the Modern Periodic Table.
Answer:
(a) The available information suggests that the element X is sulphur.
(b) Electronic configuration of S(Z = 16) 2, 8, 6

Question 50.
An element X of group 15 exists as diatomic molecule and combines with hydrogen at 773 K in presence of the catalyst to form a compound, ammonia which has a characteristic pungent smell.
(a) Identify the element X. How many valence electrons does it have ?
(b) Draw the electron dot structure of the diatomic molecule of X. What type of bond is formed in it ?
(c) Draw the electron dot structure for ammonia. What type of bonds is formed in it ?
Answer:
(a) The available information suggests that the element X is nitrogen (N) and exists in diatomic form as N,
Electronic configuration of N(Z = 7) ; 2, 5. It has five valence electrons.

Question 52.
Give an account of the process adopted by Mendeleev for the classification of elements. How did he arrive at “Periodic Law” ?
Answer:

Note : Please note that when Mendeleev arranged the elements in the Periodic Table only 63 elements were known. Even noble gas or inert gas elements were adjusted at a later stage. Moreover, many groups were left in the table.

Hope given NCERT Exemplar Solutions for Class 10 Science Chapter 5 Periodic Classification of Elements helpful to you.

If you have any doubts, please comment below. We try to provide online math tutoring for you.