You can also practice NCERT Solutions for Class 9 Geography Chapter 6 Questions and Answers on LearnInsta.com.

Question 3.
After how many years is the census held?
Answer:
After 10 years.

Question 4.
What do you mean by size and distribution of population?
Answer:
Population size means number of people at a particular time and place. Population distribution means how are they located in various regions.

Question 6.
According to the 2011 census which was the most populous state of India?
Answer:
Uttar Pradesh.

Question 9.
What position does India hold in the world with regard to its population density?
Answer:
India hold the third position after Bangladesh and Japan.

Question 11.
Give two reasons why the population density is low in some areas.
Answer:
Rugged terrain and unfavourable climate are the two reasons.

Question 13.
Give reasons for moderate population density in peninsular states.
Answer:
Shallow and less fertile soil, moderate to low rainfall, hilly, rocky and dissected nature of the terrain are some factors.

Question 23.
Which movement of the people across regions and territories does not change the size of the population? [CBSE 2010]
Answer:
Internal migration.

Question 27.
What is the pattern of internal migration in India?
Answer:
From rural to urban area.

Question 28.
What do you understand by the term ‘age composition’?
Answer:
The age composition of a population refers to the number of people in different age groups in a country.

Question 32.
What do you understand by the term ‘literacy’?
Answer:
Literacy relates to quality of being able to read and write in any language.

Question 34.
Why do difference exsist in literary level of males and females in India?
Answer:
Because more preference is given to males as compared to females. Males are considered as earning members, so they are more literate.

Question 37.
Mention the classification of occupations.
Answer:
Occupations are classified in primary, secondary and tertiary activities.

Question 38.
What are the three major issues inculcate through the census?
Answer:
The three major issues inculcated through census are:
(a) Population size and distribution. It explains how many people are there in a specific region and where they are located.
(b) Population growth and processes of population change. It means how the population has grown and changed with the times.
(c) Characteristics or qualities of the population. The age, sex, composition, literacy levels, occupational structure and health conditions can be known.

Question 39.
Define census. What is the importance of the study of population?
Answer:
Census is the counting of population of a country. In India, it takes place after every ten years. In census, various kinds of information is collected about the members of the households. On the basis of this information, the government provides details about birth rate, death rate, sex ratio, literacy and other important features of population. The importance of studying population is mainly in estimating the total manpower available for production and total amount of goods and services required for their consumption.

Question 40.
Describe the distribution of population in India. [CBSE 2015, 2016]
Answer:
(a) The population of India, as on March 2011, stood at 1,210.6 million. These 1.21 billion people
are unevenly distributed over 3.28 million square km.
(b) The population is divided into:
Very densely population – Uttar Pradesh, Maharashtra, Bihar, West Bengal, Andhra Pradesh. Very sparsely population—Sikkim Lakshadweep, Rajasthan, Arunachal Pradesh.
Moderately population – States like Assam and Peninsular states.
(c) The dense population is due to fertile, flat land and favourable climate. On the other hand, hilly areas or regions with low rainfall do not allow people to settle there.

Question 41.
What were the causes of uneven population in India? [CBSE 2016]
Answer:
The population of India is unevenly distributed in India because of the following reasons:
(a) Relief of the land: Where there are mountains and rugged relief the population is sparse. Flat and fertile land favours the population density.
(b) Climate: Less people live in cold climate, in very hot climate and where it is dry. More people live in areas where the climate is favourable.
(c) In regions where the industrial development is more the population is dense as occupations are more. Moreover, the transport facilities also favour the growth of population.

Question 42.
How does migration play an important role in population growth? Explain the ‘pull’ and ‘push’ factors of migration.
Answer:
Migration leads to steady increase in the percentage of population especially in the cities and town. It not only changes the population size but also the population composition.
The ‘pull’ factor of the city is the movement or migration of people to the cities due to increased employment opportunities, education and better living conditions.
The ‘push’ factor is associated with the migration from rural to urban area due to unfavourable conditions like unemployment and poverty in the villages.

Question 44.
Why is ‘Age Composition’ considered as one of the most basic characteristics of population? Explain. [CBSE 2016]
Answer:
(a) Age composition is considered as the most basic characteristics of population as age influences what a person needs, buys and his capacity to perform.
(b) The number and percentage of a population found within the children, working age and aged groups are an important factor to determine the society’s social and economic structure.
(c) The age structure in India gives more weightage to adults-58.7%, aged 6.9% and children-34.4%.

Question 47.
Give reasons for low sex ratio in India.
Answer:
India’s sex ratio according to 2011 census is 943 females per thousand males. It is unfavourable due to:
(a) early marriages and social evils like dowry deaths. Female children are neglected.
(b) illiteracy among females is high. They have no knowledge about pre-natal and post-natal care.
(c) low economic and political status of females.

Question 48.
“In India, literacy rate among women is still low.” Justify the statement. [HOTS]
Answer:
(a) In India, women generally look after domestic work and are left with no time to get educated
mostly in the villages. Therefore the literacy rate is low.
(b) Lack of awareness and economic backwardness is another reason for the low literacy rate,
(c) Neglect of the child, especially a girl child, is very common. They are not given proper education, nutrition and medical care.

Question 49.
Who is treated as literate according to the Census of 2001? Why is literacy an important quality of a population?
Answer:
According to the 2011 census, any person aged 7 years and above, who can read and write with understanding in any language, is treated as literate.
Literacy is an important quality of a population as only an informed and educated citizen can make intelligent choices and undertake research and development project. Not much economic development can take place with low literacy levels.

Question 50.
Explain the occupational structure of India.
Answer:
India has the following occupational structure:
(a) Primary-Agriculture: Majority of population in India is engaged in agriculture. This has given rise to disguised unemployment.
(b) Secondary-Industries: A little more than 10% of Indian population is engaged in secondary sector which is for less than countries of Europe. Production activities and not equally developed.
This leads to heavy dependence on primary sectors which itself is not so developed. This
leads to unbalanced economy.
(c) Tertiary: Population engaged in banking, communication and transport is only 29%.

Question 51.
What are the advantages of having a healthy population? In spite of the efforts of the government, the health situation in India is a matter of great concern. Why?
Answer:

Question 53.
Explain how the quality of people is more important than quantity of people. [CBSE 2011]
Answer:
Quality of people refers to the education, knowledge, skills of the people. The people are healthy and lead an active life. They put in more working hours and contribute more to the national income of the country. Quantity of people refers to the total population of the country. Many do not get adequate health facilities, per capita calorie consumption is much below the recommended level Safe drinking water and sanitation may not be available to them. Many may not get education and mostly are manual workers. Therefore a small mentally-developed population with a healthy body is more important than a large population.

Question 54.
Why is population very important in a country? [HOTS]
Or
Why is population a pivotal element in social studies?
Answer:
(a) The people are important to develop the economy and society.
(b) The people make and use the resources and are themselves resources with varying quality.
(c) It is the point of reference from which all other elements observed and from which they derive significance and meaning. ‘Resources’, ‘calamities’ and ‘disasters’ are all meaningful only in relation to human beings.
(d) Their numbers, distributions, growth and characteristics or qualities provide the basic background for understanding and appreciating all aspect’s of the environment.
(e) Human beings are producers and consumers of earth’s resources. Therefore, it is very important to know how many people are there in a country, where do they live, how and why are their numbers increasing and what are their characteristics.

Question 55.
Define the following terms:
Answer:
(a) Population. The total number of people living in a country at a given point of time.
(b) Census. Process of collection, compilation and publication of information relating to different aspects of people living in a country at a specific point of time.
(c) Million plus cities/Mega Cities. Cities with a population of one million and above. There are 53 million plus cities in India, e.g. Delhi, Chennai, Mumbai, Bengaluru.
(d) Urban Agglomeration. Around the core of each town or city, cluster of urban settlements have developed which are linked to the economy of the country .They are known as urban agglomeration. They are extension of cities but are not covered by defined municipal limits.
(e) Sex Ratio. Number of females per thousand males in the population.

Question 59.
What are the significant features of NPP 2000? What are the measures taken by the NPP 2000 to protect adolescent population?
Answer:
The NPP 2000 provides a policy framework for imparting free and compulsory education for school upto 14 years of age, reducing infant mortality rate to below 30 per 1000 live births, achieving universal immunisation of children against all vaccine preventable diseases, promoting delayed marriage for girls, and making family welfare a people-centered programme. 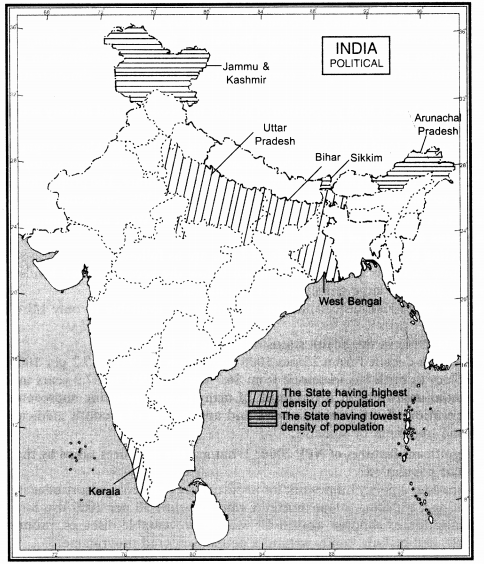 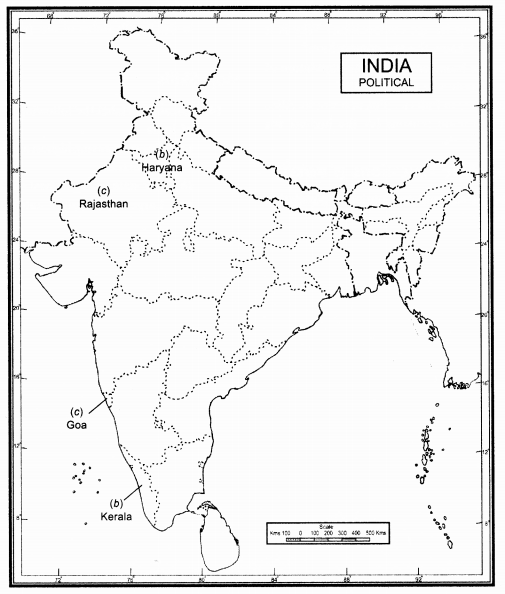