A. Underline the subject in each of these sentences.

1. The snake caught the frog.
2. She is eating an ice-cream.
3. The children are singing rhymes.
4. Basanti is wearing a sari.
5. I bought a jacket

B. Underline the predicate in each of these sentences.

1. I am knitting a sweater.
2. The school closes at 2 o’clock.
3. Whales live in the ocean.
4. Rani loved to eat chocolates.
5. We wrote interesting stories for children.

C. Choose a subject from the box to complete each sentence. The first one has been done for you.

D. Choose a predicate from the box to complete each sentence. The first one has been done for you.

watered her flowers. – barked all night long. – drove me to school.
blew in the wind. – ate crickets. – cut the boy’s hair.
fixed the sink. – slept in her cradle. – flew the airplane.

More about Sentences Worksheet Exercises for Class 3 CBSE With Answers 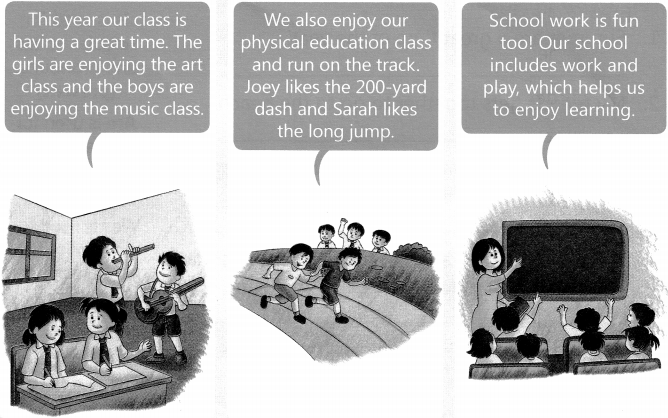 A. Answer the following questions according to the story.

B. Match the following subjects with the correct verb from the story above.

A. Correct the following sentences according to subject- verb agreement.

B. Read the following sentences and choose the correct verb from the brackets.
Example:

1. They (are, is) going to the pizza restaurant after today’s game.
2. Jane (were, was) going to go with the team but she had chores to do.
3. Stephen (is, are) one of the best players on the team.
4. The coach (was, were) very excited that the team won the tournament.
5. They (is, are) one of the highest scoring teams in the league.
6. My best friend (were, was) there when I arrived.
7. Where (do, does) your parents live?