Question 1.
Give the location of the center of mass of a (i) sphere, (ii) cylinder, (iii) ring, and (iv) cube, each of uniform mass density. Does not the center of mass of a body necessarily lie inside the body?
Answer:
The Centre of the mass of sphere cylinder, ring, and cube with homogenous mass distribution lies at its geometric centre. It is not necessary that CM (centre of mass) lies inside the body as in the cases of the ring or hollow hemisphere.

Question 2.
In the HCl molecule, the separation between the nuclei of the two atoms is about 1.27 A (1 A = 10-10 m). Find the approximate location of the CM of the molecule, given that a chlorine atom is about 35.5 times as massive as a hydrogen atom and nearly all the mass of an atom is concentrated in its nucleus.
Answer:

Question 3.
A child sits stationary at one end of a long trolley moving uniformly with a speed V on a smooth horizontal floor. If the child gets up and runs about on the trolley in any manner, what is the speed of C.M. of the (trolley + child) system?
Answer:
There is no external force acting on the child and the trolley system, hence the momentum of the entire system is conserved. Therefore the CM keeps moving with its initial speed of V in the same direction.

Question 4.
Show that the area of the triangle contained between the vectors a and b is one-half of the magnitude of a x b.
Answer: 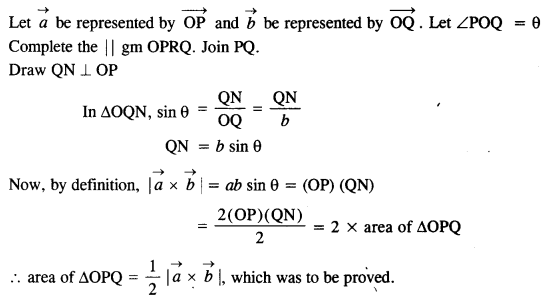 Question 5.
Show that a.(b x c) is equal in magnitude to the volume of the parallelepiped formed on the three vectors a, b and c.
Answer: 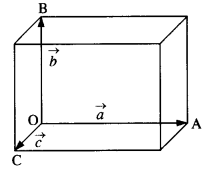 Let a parallelepiped be formed on the three vectors 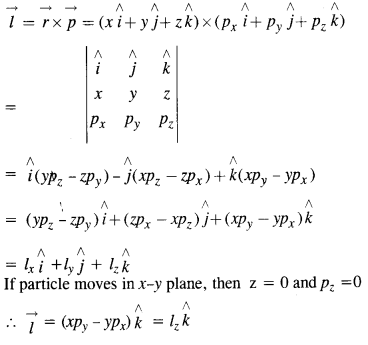 Question 7.
Two particles, each of mass m and speed u, travel in opposite directions along parallel lines separated by a distance d. Show that the vector angular momentum of the two-particle system is the same whatever be the point about which the angular momentum is taken.
Answer:

Question 8.
A non-uniform bar of weight W is suspended at rest, by two strings of negligible weight as shown in Fig. The angles made by the strings with the vertical are 36.9° and 53.1° respectively. The bar is 2 m long. Calculate the distance d of the center of gravity of the bar from its left end.
Answer: 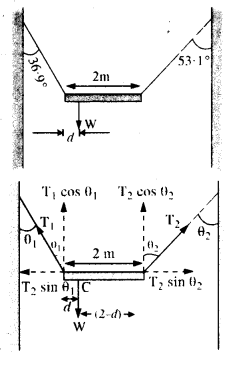 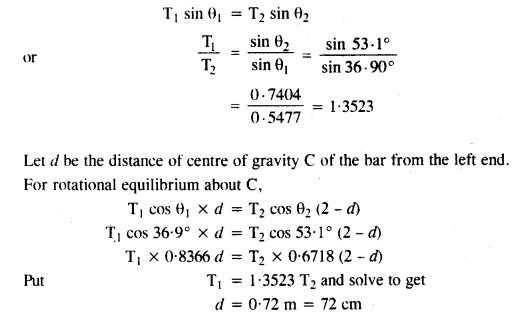 Question 9.
A car weighs 1800 kg. The distance between its front and back axles is 1.8 m. Its center of gravity is 1.05 m behind the front axle. Determine the force exerted by the level ground on each front wheel and each back wheel.
Answer:

Question 11.
Torques of equal magnitude are applied to a hollow cylinder and a solid sphere, both having the same mass and radius. The cylinder is free to rotate about its standard axis of symmetry, and the sphere is free to rotate about an axis passing through its center. Which of the two will acquire a greater angular speed after a given time?
Answer:
M.I. of the cylinder =I1= MR2
M.I. of the cylinder=I2=\(\frac {2}{ 5 } \) MR2

Clearly, final (K.E.)rot becomes more because the child uses his internal energy when he folds his hands to increase the kinetic energy. 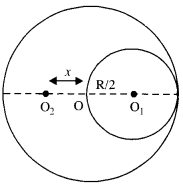 Question 17.
A meter stick is balanced on a knife-edge at its center. When two coins, each of mass 5 g are put one on top of the other at the 12*0 cm mark, the stick is found to be balanced at 45-0 cm. What is the mass of the meter stick?
Answer:

Question 18.
A solid sphere rolls down two different inclined planes of the same heights but different angles of inclination. Will it reach the bottom with the same speed in each case? Will it take longer to roll down one plane than the other? If so, which ones and why
Answer:

Since sphere rolls down two inclined planes of same height, so velocity of sphere in both the cases is same.

Since θ is different in both cases, so sphere will take longer time in case of inclined plane having a smaller inclination angle (0).

Question 20.
The oxygen molecule has a mass of 5.30 x 10–26 kg and a moment of inertia of 1.94 x 10-46 kg m2 about an axis through its center perpendicular to the line joining the two atoms. Suppose the mean speed of such a molecule in a gas is 500 m/s and that its kinetic energy of rotation is two-thirds of its kinetic energy of translation. Find the average angular velocity of the molecule.
Answer: 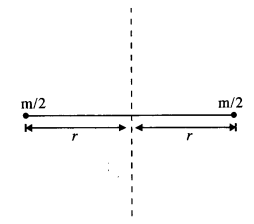 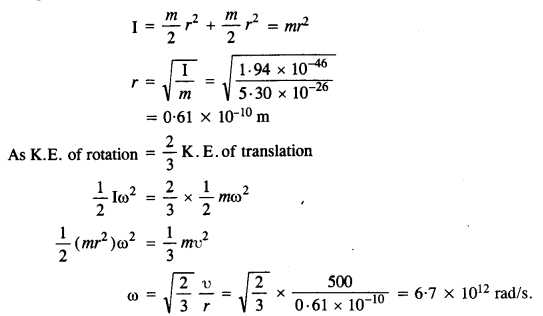 Question 21.
A cylinder rolls up an inclined plane of the angle of inclination of 30°. At the bottom of the inclined plane, the center of mass of the cylinder has a speed of 5 m/s.
(a) How far will the cylinder go up the plane?
(b) How long will it take to return to the bottom?
Answer: 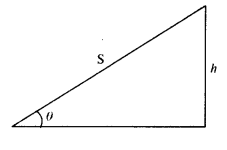 Question 22.
As shown in Fig., the two sides of a step ladder BA and CA are 1.6 m long and hinged at A. A rope DE, 0.5 m is tied halfway up. A weight of 40 kg is suspended from a point F, 1.2 m from B along with the ladder BA. Assuming the floor to be frictionless and neglecting the weight of the ladder, find the tension in the rope and forces exerted by the floor on the ladder. (Take g=9.8 m/s2)
(Hint. Consider the equilibrium of each side of the ladder separately.) 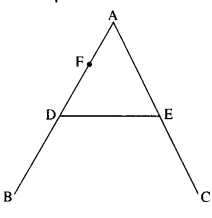 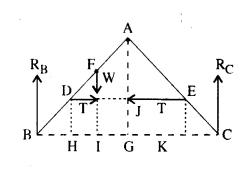 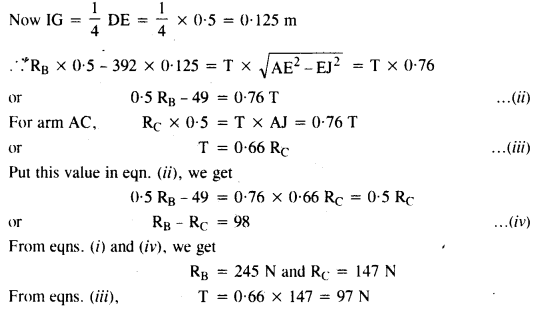 Question 23.
A man stands on a rotating platform, with his arms stretched horizontally holding a 5 kg weight in each hand. The angular speed of the platform is 30 revolutions per minute. The man then brings his arms close to his body with the distance of each weight from the axis changing from 90 cm to 20 cm. The moment of inertia of the man together with the platform may be taken to be constant and equal to 7.6 kg m2. What is his new angular speed? (Neglect friction.)Is kinetic energy conserved in the process? If not, from where does the change come about?
Answer:

No, kinetic energy is not conserved in the process. In fact, as a moment of inertia decreases, the K.E. of rotation increases. This change comes about as work is done by the man in bringing his arms closer to his body.

Question 24.
A bullet of mass 10 g and speed 500 m/s is fired into a door and gets embedded exactly at the center of the door. The door is 1.0 m wide and weighs 12 kg. It is hinged at one end and rotates about a vertical axis practically without friction. Find the angular speed of the door just after the bullet embeds into it.(Hint. The moment of inertia of the door about the vertical axis at one end is ML2/3.)
Answer:

Question 25.
Two discs of moments of inertia I, and I2 about their respective axes (normal to the disc and passing through the center), and rotating with angular speeds ω1 and ω2 are brought into contact face to face with their axes of rotation coincident,
(a) What is the angular speed of the two-disc system?
(b) Show that the kinetic energy of the combined system is less than the sum of the initial kinetic energies of the two discs. How do you account for this loss in energy? Take ω1 ≠ω2
Answer:
Initial angular moment of the discs = I1ω1 + I2ω2
M.I. of two discs combined as a system = I1+ I2
Final angular moment of the combination = (I+ I2)ω
By using the law of conservation of angular momentum,
we get I1ω1 + I2ω2 = ( I1+ I2 )ω

As the above term comes out to be positive, thus, the rotational kinetic energy of the combined disc is less than the total initial energy. 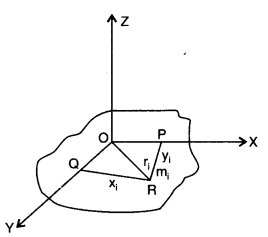 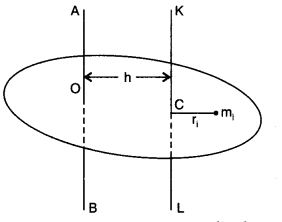 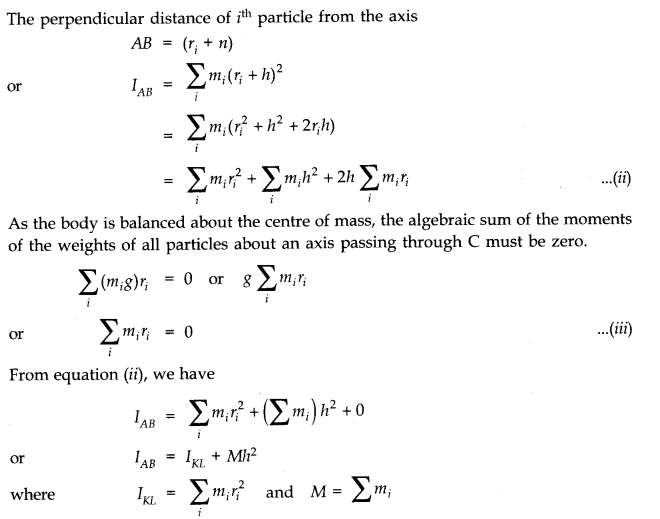 Question 27.
Prove the result that the velocity of translation of a rolling body (like a ring, disc, cylinder, or sphere) at the bottom of an inclined plane of a height h is given by using dynamical consideration (i.e., by consideration of forces and torques). Note k is the radius of gyration of the body about its symmetry axis, and R is the radius of the body. The body starts from rest at the top of the plane.

Answer:
When a body rolls down an incline of height h, we apply the principle of conservation of energy.
K.E. of translation + K.E. of rotation = P.E. at the top. 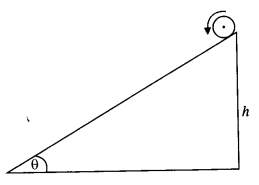 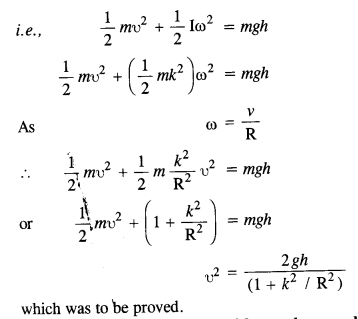 Question 28.
A disc rotating about its axis with angular speed ω0 is placed lightly (without any translational push) on a perfectly frictionless table. The radius of the disc is R. What are the linear velocities of the points A, B, and C on the disc shown in Fig.? Will the disc roll in the direction indicated?
Answer: 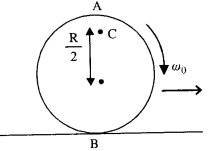 The disc will not roll in the given direction because friction is necessary for the same.

Question 30.
A solid disc and a ring, both of radius 10 cm are placed on a horizontal table simultaneously, with an initial angular speed equal to 10 π rad s-2. Which of the two will start to roll earlier? The coefficient of kinetic friction is μk = 0.2.
Answer:
Force of friction (μk  mg) produces an acceleration a in the center of mass (moving with υ = R ω) 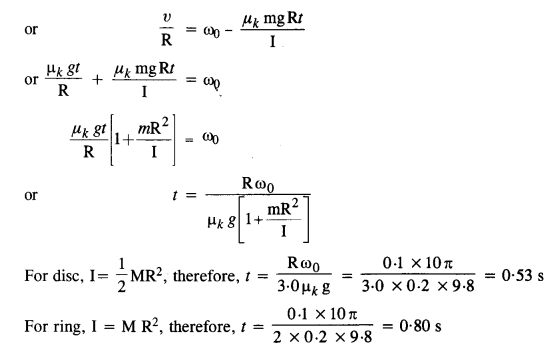 Question 32.
Read each statement below carefully, and state, with reason, it is true or false:
(a) During rolling, the force of friction acts in the same direction as the direction of motion of the CM of the body.
(b) The instantaneous speed of the point of contact during rolling is zero.
(c) The instantaneous acceleration of the point of contact during rolling is zero.
(d) For perfect rolling motion, work done against friction is zero.
(e) A wheel moving down a perfectly frictionless inclined plane will undergo a slipping (not rolling) motion.
Answer:
(a) True (The force of friction helps in rolling a body).
(b) True (A rolling body is considered as a rotating body about an axis passing through the point of contact).
(c) False (Since the body is rotating, so its instantaneous acceleration cannot be zero).
(d) True (Since the point of contact is at rest, so work done is zero).
(e) True (In the case of the frictionless inclined plane, there is no tangential force of friction (or torque) and hence wheel cannot roll).