Question 3.
Fill in the blanks using the words from the list appended with each statement:
(a) Surface tension of liquids generally……………. with temperature (increases/decreases)
(b) Viscosity of gases……………… with temperature, whereas viscosity of liquids………………. with temperature (increases/decreases)
(c) For solids with the elastic modulus of rigidity, the shearing force is proportional to………………….. while for fluids it is proportional to…………. (shear strain/rate of shear strain)
(d) For a fluid in steady flow, the increase in flow speed at a constriction follows from…………….. while the decrease of pressure there follows from………….. (conservation of mass/Bernoulli’s principle)
(e) For the model of a plane in a wind tunnel, turbulence occurs at a…………………… speed than the critical speed for turbulence for an actual plane (greater/smaller)
Answer:
(a) decreases
(b) increases ; decreases
(c) shear strain ; rate of shear strain
(d) conservation of mass ; Bernoulli’s principle

Question 4.
Explain why
(a) To keep a piece of paper horizontal, you should blow over, not under, it.
(b) When we try to close a water tap with our fingers, fast jets of water gush through the openings between our fingers.
(c) The size of a needle of a syringe controls flow rate better than the thumb pressure exerted by a doctor while administering an injection.
(d) A fluid flowing out of a small hole in a vessel results in a backward thurst on the vessel.
(e) a spinning cricket ball in air does not follow a parabolic trajectory.
Answer:
(a) When we blow over the piece of paper, the velocity of air increases. As a result, the pressure over it decreases in accordance with the Bernoulli’s theorem whereas the pressure below it is higher (atmospheric pressure) which keeps the paper horizontal.

(c) For a> constant height, the Bernoulli’s theorem is expressed as
p + \(\frac { 1}{ 2 } \) pυ2 = constant
In this equation, the pressure P occur with a single power whereas the velocity occurs with a square power. Therefore, the velocity has more effect compared to the pressure. It is for this reason that needle of the syringe controls flow rate better than the thumb pressure exerted by the doctor.

(d) When a fluid flows out of a small hole, it carries momentum with it. According to the law of conservation of momentum, the vessel gets a recoil momentum. Thus, there is a change in momentum of the vessel which means that a backward thurst acts on it.

Question 7.
A vertical off-shore structure is built to withstand maximum stress of 109 Pa. Is the structure suitable for putting up on top of an oil well in the ocean? Take the depth of the ocean to be roughly 3 km, and ignore ocean currents.
Answer:
Maximum stress that can be taken by the off-share structure, Pmax = 109Pa.
density of water = 103 kg /m3 and g = 9.8 m/s2 and h = 3km (depth of the sea)
∴ Pressure exerted by seawater, P = ρgh
= 103 × 9.8 × 3 × 103
P = 2.94 × 107 Pa
Note that, P < Pmax
Since the pressure exerted by the seawater is less than the maximum pressure the structure can withstand, the structure is suitable for putting on the top of the oil well.

Question 9.
A U-tube contains water and methylated spirit separated by mercury. The mercury columns in the two arms in level with 10.0 cm of water in one arm and 12.5 cm of spirit in the other. What is the specific gravity of spirit?
Answer: 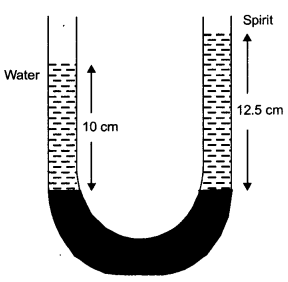 Question 10.
In the previous problem, if 15.0 cm of water and spirit each are further poured into the respective arms of the tube, what is the difference in the levels of mercury in the two arms? (Specific gravity of mercury = 13.6)
Answer:
If pm be the density of mercury, then 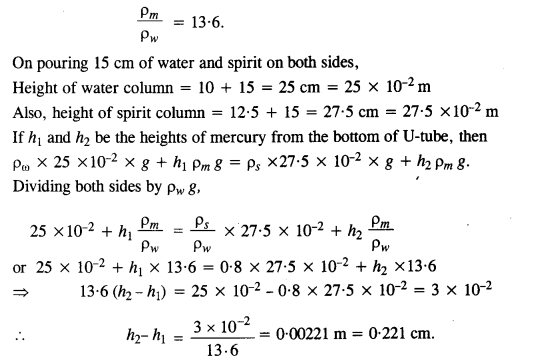 Question 15.
Figures (a) and (b) refer to the steady flow of a (non-viscous) liquid. Which of the two figures is incorrect? Why?

Answer:
Figure (a) is incorrect. It is because of the fact that at the kink, the velocity of flow of liquid is large and hence using the Bernoulli’s theorem the pressure is less. As a result, the water should not rise higher in the tube where there is a kink (i. e. where the area of cross-section is small).

Question 17.
A U-shaped wire is dipped in a soap solution and removed. The thin soap film formed between the wire and the light slider supports a weight of 1.5 x 10-2 N (which includes the small weight of the silder). The length of the silder is 30 cm. What is the surface tension of the film ?
Answer:
Force on the silder, F= 1.5 x 10-2 N

Question 18.
(a) shows a thin liquid film supporting a small weight = 4.5 x 10-2 N. What is the weight supported by a film of the same liquid at the same temperature in Fig. (b) and (c) ? Explain your answer physically. 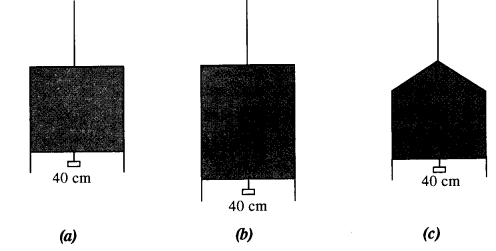 Answer:
As shown in fig(a) Question 21.
A tank with a square base of area 1.0 m2 is divided by a vertical partition in the middle. The bottom of the partition has a small-hinged door of area 20 cm2. The tank is filled with water in one compartment, and an acid (or relative density 1.7) in the other, both to a height of 4.0 m. compute the force necessary to keep the door close.
Answer: 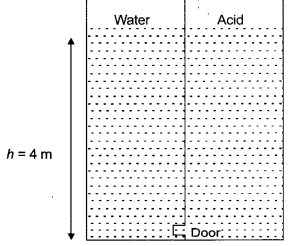 Question 22.
A manometer reads the pressure of a gas in an enclosure as shown in Fig. (a). When a pump removes some of the gas, the manometer reads as in Fig. (b). The liquid used in the manometers is mercury and the atmospheric pressure is 76 cm of mercury.
(a) Give the absolute and gauge pressure of the gas in the enclosure for cases (a) and (b), in units of cm of mercury.
(b) How would the levels change in case (b) if 13.6 cm of water (immiscible with mercury) are poured into the right limb of the manometer? (Ignore the small change in the volume of the gas).

Question 23.
Two vessels have the same area but different shapes. The first vessel takes twice the volume of water that the second vessel requires to fill upto a particular common height. Is the force exerted by the water on the base of the vessel the same in the two cases? If so, why do the vessels filled with water to that same height give different readings on a weighing scale?
Answer:

Question 24.
During blood transfusion, the needle is inserted in a vein where the gauge pressure is 2000 Pa. At what height must the blood container be placed so that blood may just enter the vein ? [Use the density of whole blood as 1.06 x 103 kg m-3 ]
Answer:

Question 27.
A plane is in level flight at constant speed and each of its two wings has an area of 25 m2. If the speed of the air is 180 km/h over the lower wing and 234 km/h over the upper wing surface, determine the plane’s mass. (Take air density to be 1 kg m-3).
Answer:

Question 28.
In Millikan’s oil drop experiment, what is the terminal speed of an uncharged drop of radius 2.0 x 10-5 m and density 1.2 x 103 kg m-3. Take the viscosity of air at the temperature of the experiment to be
1.8 x 10-5 How much is the viscous force on the drop at that speed ? Neglect buoyancy of the drop due to air.
Answer:

Question 30.
Two narrow bores of diameters 3.0 mm and 6.0 mm are joined together to form a U-tube open at both ends. If the U-tube contains water, what is the difference in its levels in the two limbs of the tube ? Surface tension of water at the temperature of the experiment is 7.3 x 10-2 N m-1. Take the angle of contact to be zero and density of water to be 1.0 x 103 kg m-3 (g = 9.8 ms’2)
Answer:
Let rx be the radius of one bore and r2 be the radius of second bore of the U-tube. Then, if hx and h2 are the heights of water on two sides, 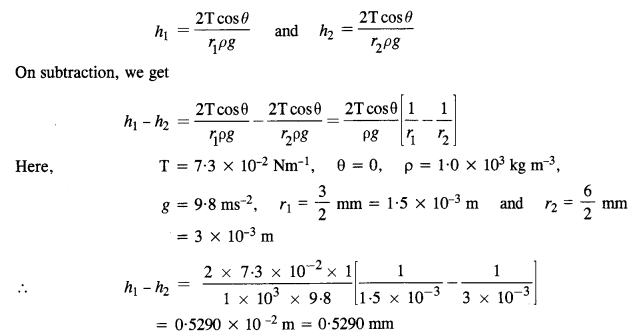 Question 31.
(a) It is known that density p of air decreases with height y (in metres) as

where ρo = 1.25 kg m-3 is the density at sea level, and y0 is a constant. This density variation is called the law of atmospheres. Obtain this law assuming that the temperature of the atmosphere remains constant (isothermal conditions). Also, assume that the value of g remains constant.
(b) A large He balloon of volume 1425 m3 is used to lift a payload of 400 kg. Assume that the balloon maintains a constant radius as it rises. How high does it rise?
[Take yo = 8000 m and pHe = 0.18 kg m-3]
Answer:
(a) Consider an imaginary cylinder of air having an area ‘a’ of a cross-section of each end face and placed vertically above the surface of the earth. Let the cap I of the cylinder be at a height of y and the cap II be at the height y + dy. Let P and P + dP be the pressures at caps I and II respectively. Then, the net force acting on the cap due to gravity is the weight of the cylinder i. e.,
W = mass of cylinder xg = ady.pg    …(1)
Since the cylinder is considered to be placed in the air, therefore, the force due to the difference in pressure is balanced by the weight of the cylinder under the equilibrium conditions. 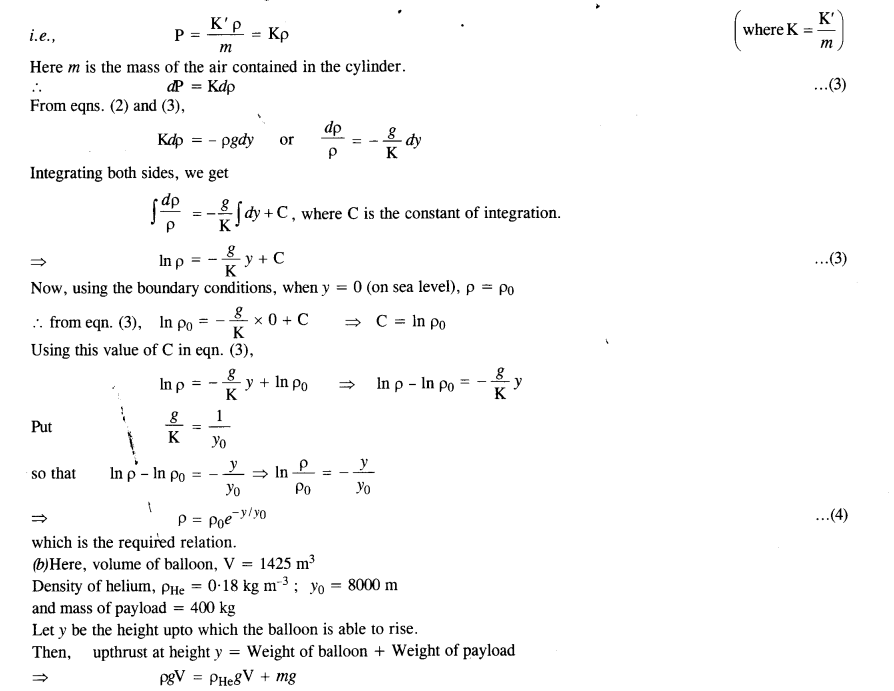