Question 4.
Use the formula 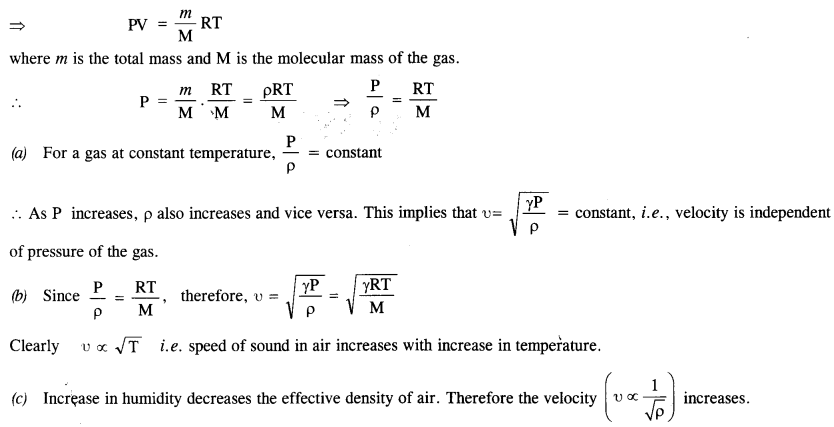 Question 5.
You have learnt that a travelling wave in one dimension is represented by a function y = f(x,t) where x and t must appear in the combination x – υt or x + υt, i.e. y = F(x ± υt.) Is the converse true ? Examine if the following functions for y can possibly represent a travelling wave:
(a) (x – υt)2
(b) log [(x +υt )/x0]
(c)exp [-(x + υt)/x0]
(d) 1/(x + υt)
Answer:
The converse of the above statement is not true. For a function to represent a travelling wave, the function must be finite and well defined at any point and at any time. Only the function (C) satisfies this condition and is a wave function.

Question 8.
A transverse harmonic wave on a string is described by
y (x, t) = 3.0 sin (361 + 0.018 x + π/4) where x and y are in cm and t in s. The positive direction of x is from left to right.
(a) Is this a travelling wave or a stationary wave?
(b) If it is travelling, what are the speed and direction of its propagation?
(c) What are its amplitude and frequency ?|
(d) What is the initial phase at the origin?
(e) What is the least distance between two successive crests in the wave?
Answer:
(a) It is traveling which is propagating from right to left. Comparing the given equation with y (x, t) = r sin (ωt+kr+φ) Question 9.
For the wave described in Exercise 8, plot the displacement (y) versus (f) graphs for x = 0, 2, and 4 cm. What is the shape of these graphs? In which aspects do the oscillatory motion in travelling waves differ from one point to another: amplitude, frequency, or phase?
Answer:
The transverse harmonic wave is 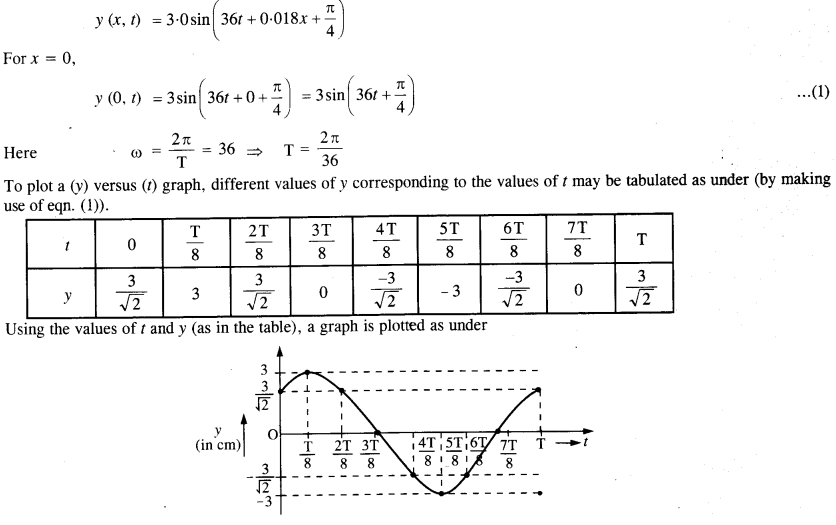 The graph obtained is sinusoidal. Similar graphs are obtained for x = 2 cm and x = 4 cm. The oscillatory motion in the travelling wave only differs in respect of phase. The amplitude and frequency of oscillatory motion remain the same in all the cases. 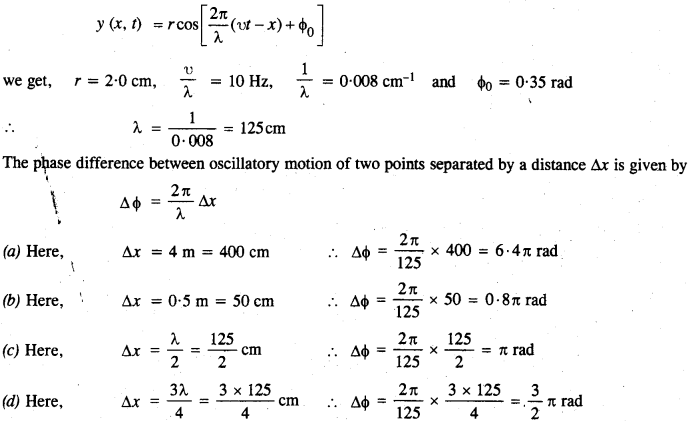 Question 11.
The transverse displacement of a string (clamped at its both ends) is given by

where x and y are in m and t in s. The length of the string is 1.5 m and its mass is 3.0 x 10-2 kg.
Answer the following:
(a) Does the function represent a travelling wave or a stationary wave?
(b) Interpret the wave as a superposition of two waves traveling in opposite directions. What are the wavelength, frequency, and speed of each wave?
(c) Determine the tension in the string.
Answer:
(a) The function does not represent a travelling wave. It represents a stationary wave.
(b) Using the relation

Question 13.
Given below are some functions of x and y to represent the displacement (transverse or longitudinal) of an elastic wave. State which of these represent
(1) a travelling wave,
(2) a stationary wave or
(3) none at all:
(a) y = 2 cos (3x) sin (10t)
(b)

Question 15.
A meter-long tube open at one end, with a movable piston at the other end, shows resonance with a fixed frequency source (a tuning fork of frequency 340 Hz) when this tube length is 25.5 cm or 79.3 cm. Estimate the speed of sound in the air at the temperature of the experiment. The edge effects may be neglected.
Answer:
Let v be the fundamental frequency of the closed-end organ pipe for the length
lx = 25.5 cm 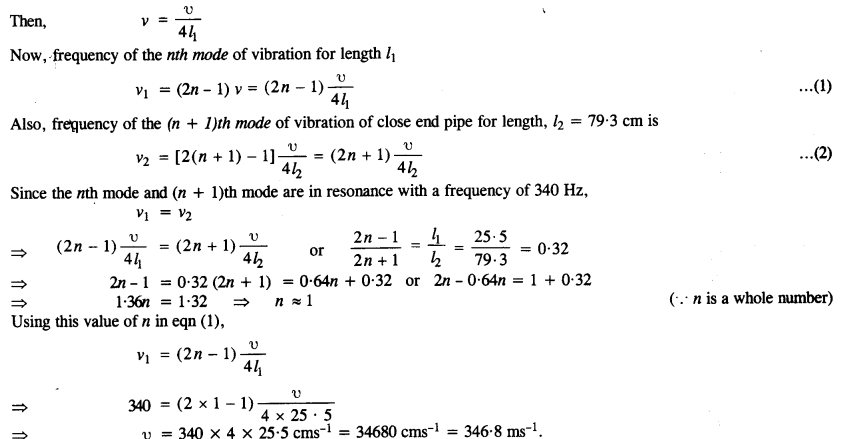 Question 17.
A pipe 20 cm long is closed at one end. Which harmonic mode of the pipe is resonantly excited by a 430 Hz source? Will the same source be in resonance with the pipe if both ends are open? (speed of sound in air is 340 ms-1).
Answer:

Question 18.
Two sitar strings A and B playing the note ‘Ga’ are slightly out of tune and produce beats of frequency 6 Hz. The tension in string A is slightly reduced and the beat frequency is found to reduce to 3 Hz. If the original frequency of A is 324 Hz, what is the frequency of B?
Answer:
Let v1 and v2 be the frequencies of strings A and B respectively
Then, v1= 324 Hz, v2 = ?
Number of beats, b = 6
v2 = v1± b = 324 ± 6
i.e.,   v2 = 330 Hz or 318Hz.
Since the frequency is directly proportional to square root of tension, on decreasing the tension in the string A, its frequency v1; will be reduced i.e., number of beats will increase if v2 = 330 Hz. This is not so because a number of beats becomes 3. Therefore, it is concluded that the frequency v2 = 318 Hz because on reducing the tension in string A, its frequency may be reduced to 32l Hz, thereby giving 3 beats with v2 = 318 Hz.

Question 19.
Explain why (or how) :
(a) in a sound wave, a displacement node is a pressure antinode and vice versa.
(b) bats can ascertain distances, directions, nature and sizes of the obstacles without any “eyes”.
(c) a violin note and sitar note may have the same frequency, yet we can distinguish between the two notes.
(d) solids can support both longitudinal and transverse waves, but only longitudinal waves can propagate in gases, and
(e) The shape of a pulse gets distorted during propagation in a dispersive medium.
Answer:
(a) In a sound wave, a decrease in displacement i..e. displacement node causes an increase in the pressure there i.e, a pressure antinode is formed. Also, an increase in displacement is due to the decrease in pressure.

(b) Bats emit ultrasonic waves of high frequency from their mouths. These waves after being reflected back from the obstacles on their path are observed by the bats. These waves give them an idea of distance, direction, nature and size of the obstacles.

(c) The quality of a violin note is different from the quality of sitar. Therefore, they emit different harmonics which can be observed by human ear to differentiate between the two notes.

(e) A pulse of sound consists of a combination of waves of different wavelength. In a dispersive medium, these waves travel with different velocities giving rise to the distortion in the wave.

Question 21.
A train, standing in a station-yard, blows a whistle of frequency 400 Hz in still air. The wind starts blowing in the direction from the yard to the station at a speed of 10 ms-1. What are the frequency, wavelength, and speed of sound for an observer standing on the station’s platform? Is the situation exactly identical to the case when the air is still and the observer runs towards the yard at a speed of 10 ms-1? The speed of sound in still air can be taken as 340 ms-1.
Answer:
Frequency of source of the sound, v = 400 Hz.
Speed of sound, υ= 340 ms-1; Speed of wind, υm = 10 ms-1.
Effective speed of sound = Speed of sound + Speed of air
= υ + υm = 340 + 10 = 350 ms-1.
The source, as well as the listener, are both at rest. Therefore, there is no relative motion.

Since the source of sound is at rest, the wavelength A does not change
.’. wavelength = 0.875 m.
Also, speed of sound = 340 + 0 = 340 ms-1
The situations are altogether different, because both the observer and the source are in motion with respect to the medium in this case. (b) All the point, located at distance nλ, (where n is an integer) from the point x = 1 have the same velocity and displacement.

Question 25.
A SONAR system fixed in a submarine operates at a frequency of 40.0 kHz. An enemy submarine moves towards the SONAR with a speed of 360 km h-1. What is the frequency of sound reflected by the submarine? Take the speed of sound in water to be 1450 ms-1.
Answer:
Here, frequency of SONAR(source )=40.0 kHz = 40 x103

Question 26.
Earthquakes generate sound waves inside the earth. Unlike a gas, the earth can experience both transverse (S) and longitudinal (P) sound waves. Typically the speed of the S wave is about 4.0 kms-1, and that of P wave is 8.0 kms-1. A seismograph records P and S waves from an earthquake. The first P wave arrives 4 min before the first S wave. Assuming the waves travel in a straight line, how far away does the earthquake occur?
Answer:
Let υ1 and υ2 be the velocities of two waves respectively and t1 and t2 is the time taken by them to travel to the position of a seismograph.

Question 27.
A bat is fitting about in a cave, navigating via ultrasonic bleeps. Assume that the sound emission frequency of the bat is 40 kHz. During one fast swoop directly toward a flat wall surface, the bat is moving at 0.03 times the speed of sound in air. What frequency does the bat hear reflected off the wall ?
Answer:
Here, frequency of sound emitted by bat, v = 40 kHz
Velocity of bat υs= 0.03 u, where 0 is the velocity of sound.
The bat is moving towards the flat wall. This is the case of source in motion and the observer at rest. Therefore, the frequency of sound reflected at the wall is