Question 1.
State, for each of the following physical quantities, if it is a scalar or a vector :
Volume, mass, speed, acceleration, density, number of moles, velocity, angular frequency, displacement, angular velocity.
Answer: 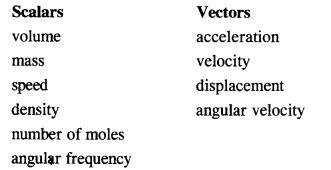 Question 4.
State with reasons, whether the following algebraic operations with scalar and vector physical quantities are meaningful: 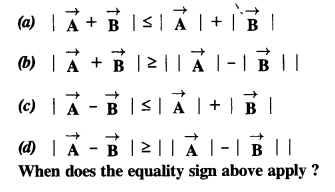 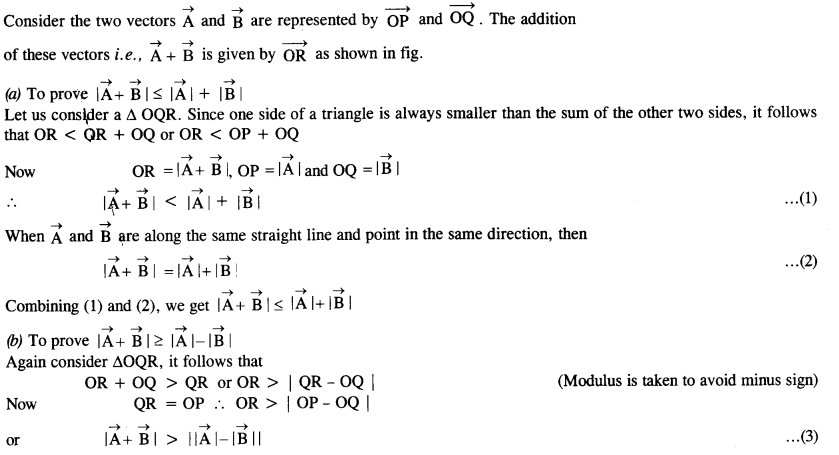 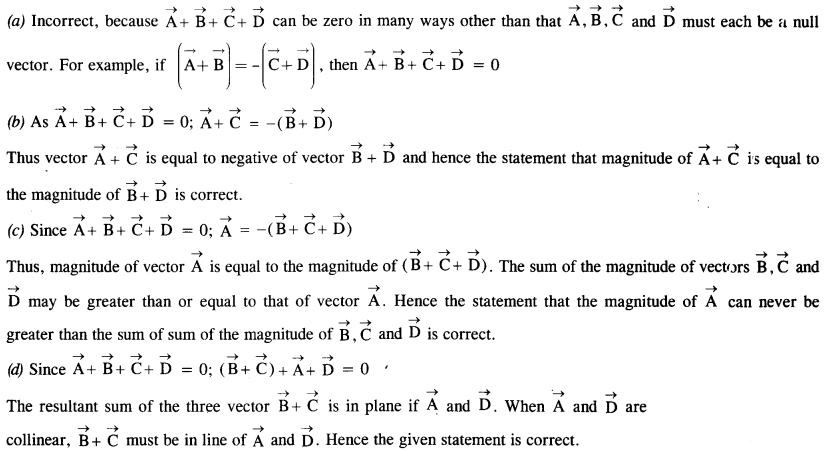 Question 8.
Three girls skating on a circular ice ground of radius 200 m start from a point P on the edge of the ground and reach a point Q diametrically opposite to P following different paths as shown in Fig. What is the magnitude of the displacement vector for each ? For which girl is this equal to the actual length of path skate ? 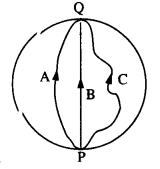 Question 9.
A cyclist starts from the center O of a circular park of radius 1 km, reaches the edge P of the park, then cycles along the circumference, and returns to the center along QO as shown in Fig. If the round trip takes 10 min, what is the
(a) net displacement,
(b) average velocity, and
(c) the average speed of the cyclist? 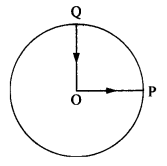 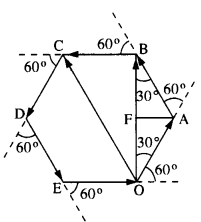 (3) The motorist will take the 8th turn at B

Question 12.
Rain is falling vertically with a speed of 30 ms-1. A woman rides a bicycle with a speed of 10 ms-1 in the north to south direction. What is the direction in which she should hold her umbrella?
Answer: 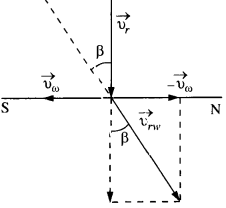 In order to protect herself from rain, the woman should hold her umbrella

So a woman should hold her umbrella at an angle of 18°26′ with the vertical, towards the south.

Question 13.
A man can swim at a speed of 4 km/h in still water. How long does he take to cross a river 1km wide if the river flows steadily at 3 km/h and he makes his strokes normal to the river current? How far down the river does he go when he reaches the other bank?
Answer: 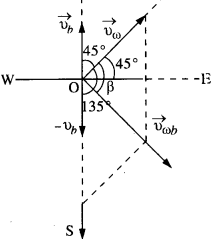 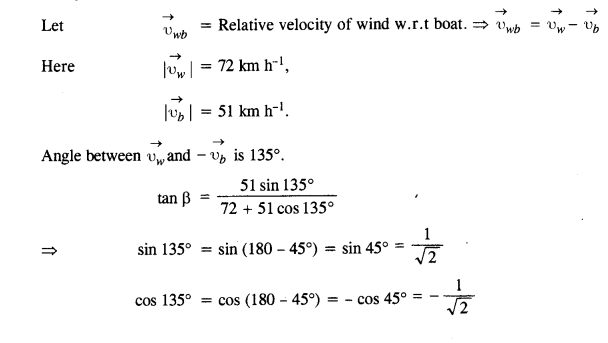 Question 15.
The ceiling of a long hall is 25 m high. What is the maximum horizontal distance that a ball thrown with a speed of 40 ms-1 can go without hitting the ceiling of the hall?
Answer: 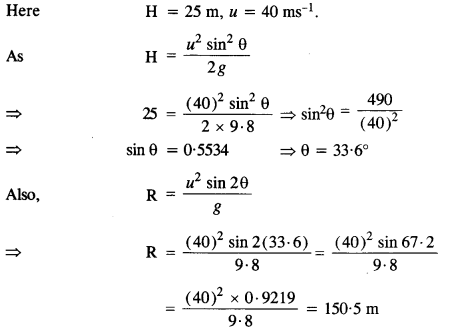 Question 16.
A cricketer can throw a ball to a maximum horizontal distance of 100 m. How much high above the ground can the cricketer throw the same ball?
Answer: 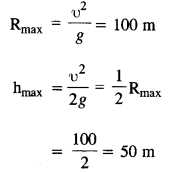 Question 17.
A stone tied to the end of a string 80 cm long is whirled in a horizontal circle with a constant speed. If the stone makes 14 revolutions in 25 s, what is the magnitude and direction of acceleration of the
stone ?
Answer: 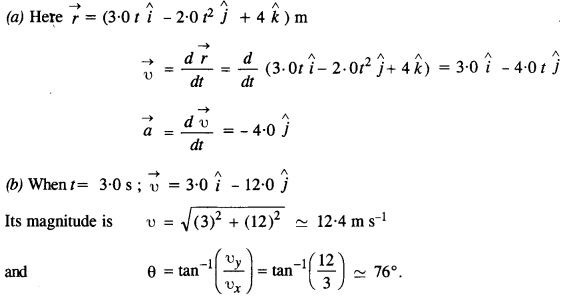 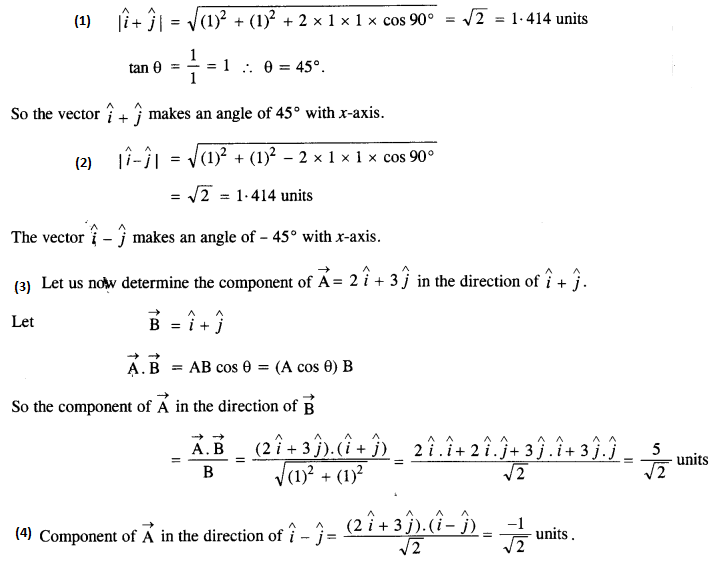 Question 24.
Read each statement below carefully and state, with reasons and examples, if it is true or false :
A scalar quantity is one that

Question 25.
An aircraft is flying at a height of 3400 m above the ground. If the angle subtended at a ground observation point by the aircraft positions 10 s apart is 30°, what is the speed of the aircraft?
Answer:
Let A and B be the two positions of the aircraft separated by 10 s, then from the figure. 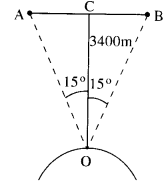 Question 26.
A vector has magnitude and direction. Does it have a location in space? Can it vary with time? Will two equal vectors’ \( \vec { A } and { B }\) at different locations in space necessarily have identical physical effects ? Give examples in support of your answer.
Answer:
A vector does not have any location in space. No, it can not vary with time provided its magnitude and direction are given. For Example, \( \vec { A }= \) \( \hat {2i }+{ 2j }+{ 5j }\) does not vary with time. Two equal vectors at different locations in space may have identical physical effects. For example, two bodies fall freely with the same acceleration at two positions if acceleration due to gravity at these two positions is equal.

Question 28.
Can you associate vectors with

Question 30.
A fighter plane flying horizontally at an altitude of 1.5 km with a speed of 720 km h-1 passes directly overhead an anti-craft gun. At what angle from the vertical should the gun be fired for the shell muzzle speed 600 m s-1  to hit the plane? At what maximum altitude should the pilot fly the plane to avoid being hit? Take g = 10 m s-2
Answer: 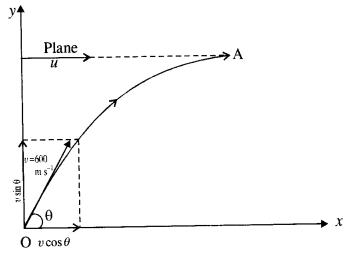 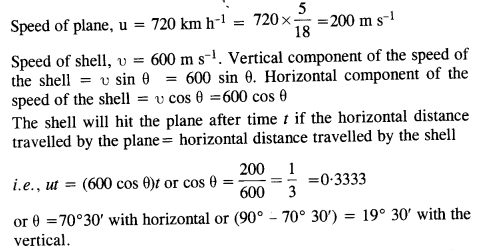 Question 31.
A cyclist is riding at a speed of 27 km/h. As he approaches a circular turn on the road of a radius of 80 m, he applies brakes and reduces his speed at the constant rate of 0.5 m/s every second. What is the magnitude and direction of the net acceleration of the cyclist on the circular turn?
Answer: 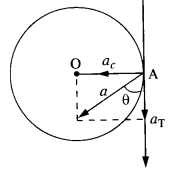 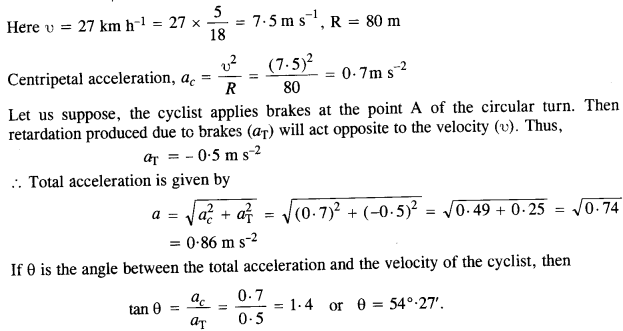 Question 32.
(a) Show that for a projectile, the angle between the velocity and the x-axis as a function of time is given by

where the symbols have their usual meaning.
Answer:
(a) Let a projectile fired at an angle θ with the x-axis.
As θ depends on t, θ(t), at any instant, 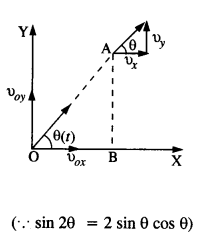 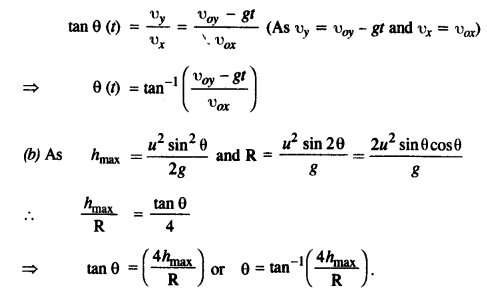