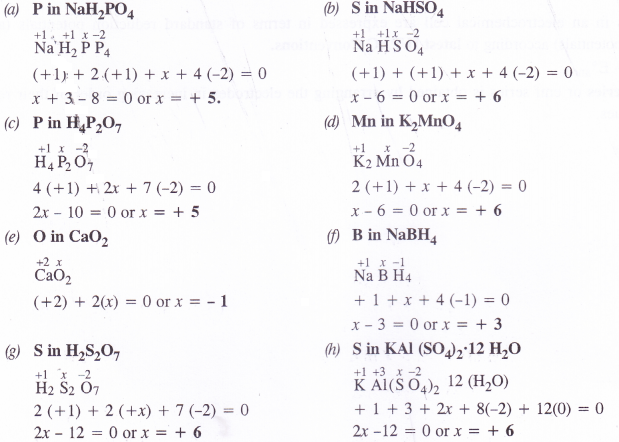 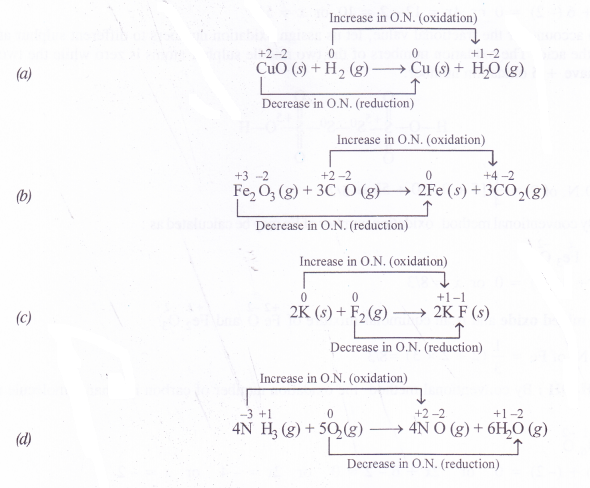 Question 6.
Write the formulas of the following compounds :
(a) Mercury (II) chloride (b) Nickel (II) sulphate (c) Tin (IV) oxide (d) Thallium (I) sulphate (e) Iron (III) sulphate (f) Chromium (III) oxide.
Answer:
The formulas have been shown by stock notations. The Roman numerals given in parenthesis represent the oxidation state of the metal atom. Taking into account the oxidation state of the anions, the chemical formulas of the compounds may be written as :
(a) HgCl2 (b) NiSO4 (c) SnO2 (d) T12SO4 (e) Fe2(SO4)3 (f) Cr2O3 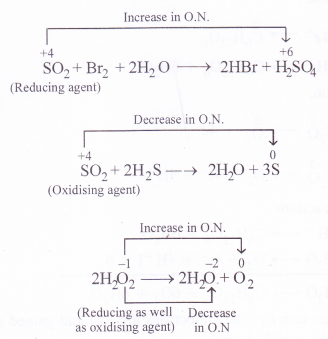 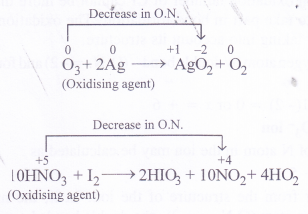 Note:
(1) In this reaction O3 acts as an O.A. and H2O2 acts as a R.A.
(2) If a co-ordinate bond exist between two similar atoms, the donor atom acquires + 2 O.N. and the acceptor gets -2 O.N.
This explains the path of the reaction i.e., how electrons are lost and gained as well as and why it is more appropriate to write the equation as above.

Question 10.
The compound AgF2 is an unstable compound. However if formed, the compound acts as a very strong oxidising agent. Why ?
Answer:
In AgFL the oxidation state of silver is + 2 i.e., it exists as Ag2+ ion. This is quite unstable since the normal stable oxidation state of the metal is + 1 or it exists as Ag+ ion. This means that if the compound AgF2 be formed, it will undergo reduction by the gain of electrons. It is therefore, a very strong oxidising agent
Ag2+ + e– — Ag+ (b) When concentrated sulphuric acid is added to an inorganic mixture containing chloride, we get a colourless pungent smelling gas HC1. However, if mixture contains bromide, then red vapours of bromine are evolved. Why ?
Answer: In the manufacture of benzoic acid from toluene, neutral medium is preferred over acidic or alkaline medium due to following reasons.

(b)
A chloride such as NaCl reacts with concentrated sulphuric acid to evolve hydrogen chloride gas upon heating. It has a pungent smell.

Hydrogen bromide is also expected to be formed in the same way when a bromide is heated with concentrated sulphuric acid. However, the acid being a strong oxidising agent will oxidise HBr to bromine (Br2) which gets evolved  as red vapours.

Please note HC1 (g) is quite stable and is not oxidised to chlorine with concentrated sulphuric acid.

Question 13.
Identify the substance oxidised, reduced, oxidising agent and reducing agent for each of the following reactions : Question 15.
Justify giving reactions that among halogens, fluorine is the best oxidant and among hydrohalic compounds, hydroiodic acid is the best reductant.
Answer:
The halogens (X2) have strong electron accepting tendency. They are therefore, powerful oxidising agents. The relative order of oxidising powers of halogens is :

Fluorine is the strongest oxidising agent (oxidant). It can be justified by the fact that it can liberate the other halogens from their respective compounds. For example,
2KC1 + F2  →  2KF + Cl2
2KBr + F2 → 2KF + Br2
2KI + F2 → 2KF + I2
Among halogen acids (HX), the HI is the strongest reducing agent or reductant because its bond dissociation enthalpy is the minimum (299 kJ mol-1)

(kJ mol-1)
The iodination of methane for examples, is of reversible nature because HI formed in the reaction being a very strong reducing agent converts iodomethane back to methane

In the reaction, O.N. of Xe decreases from + 8 to + 6. Therefore, XeO6 is reduced.O.N. of F increases from – 1 to 0. Therefore, F– is oxidised. The redox reaction occurs because Na2XeO6 (of which XeOg“ is a part) is a stronger oxidising agent than F2. 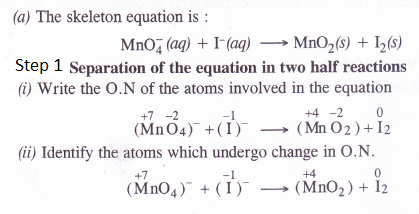 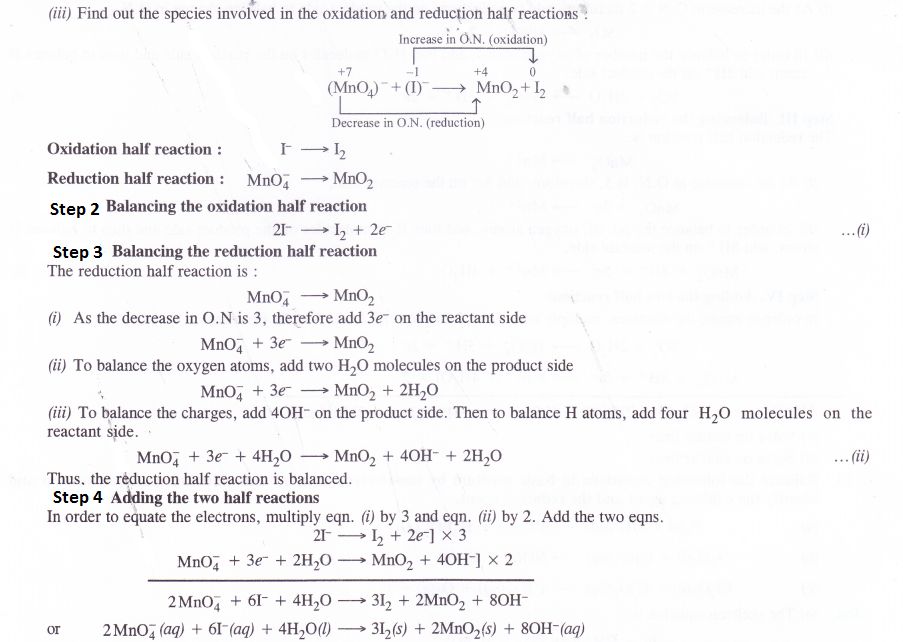 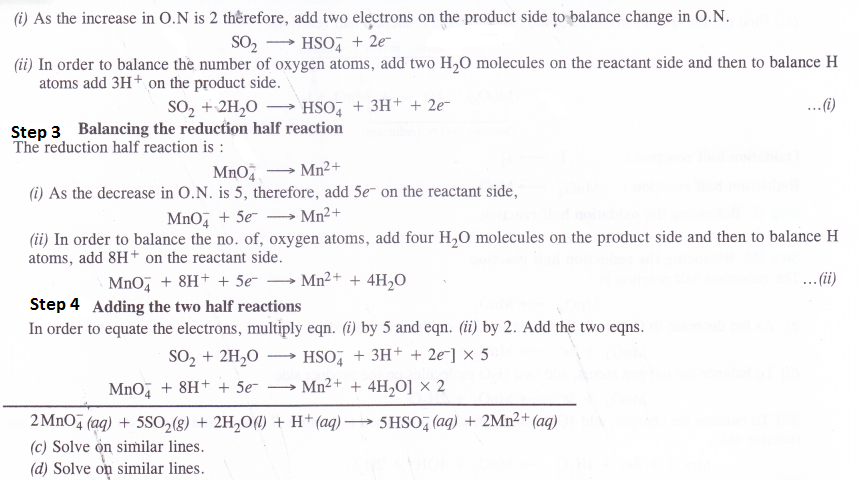 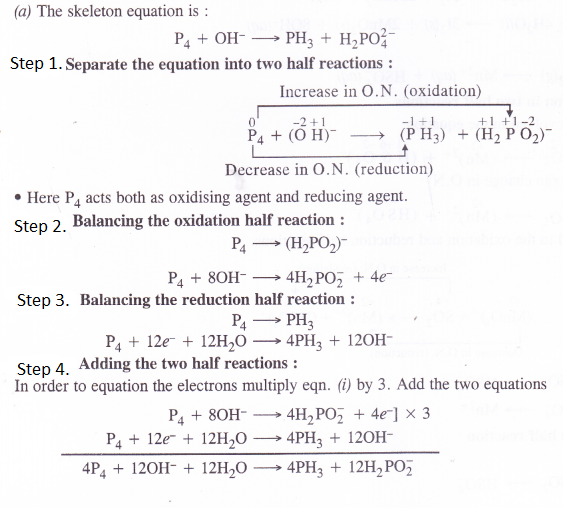 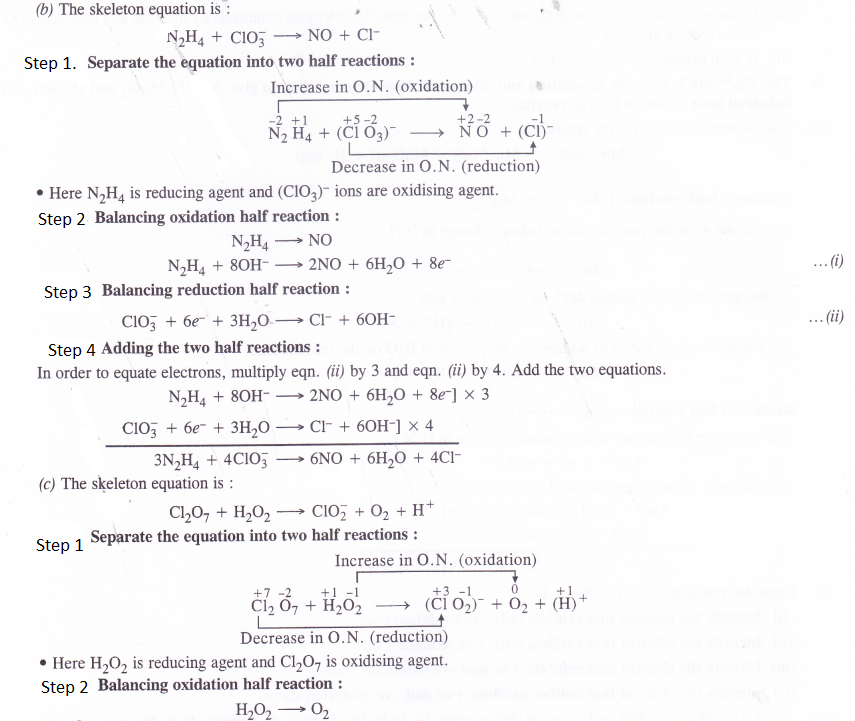 Question 21.
The Mn3+ ion is unstable in solution and under goes disproportionation to give Mn2+, MnO2 and H+ ion. Write balanced ionic equation for the reaction.
Answer: 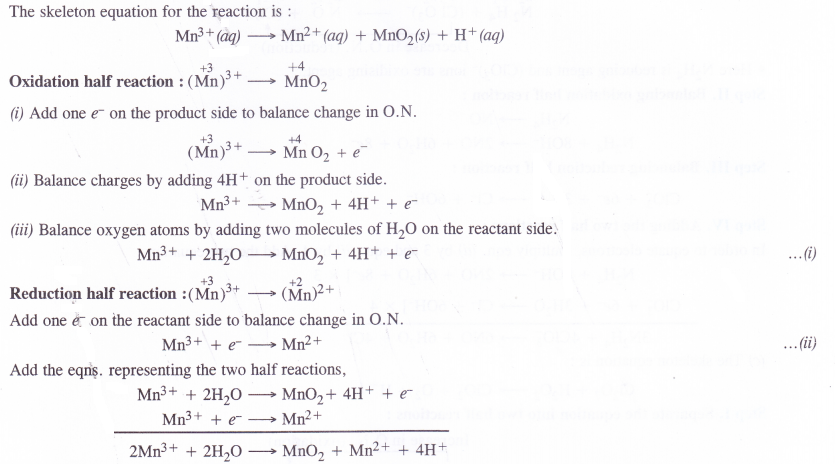 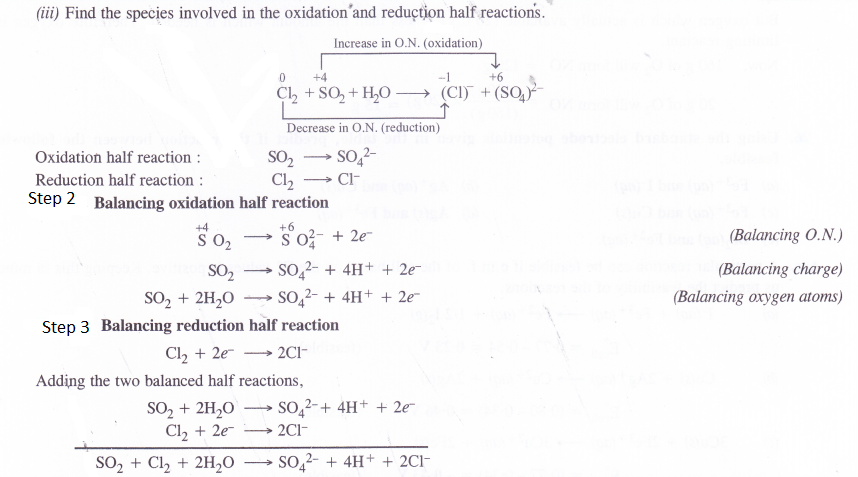 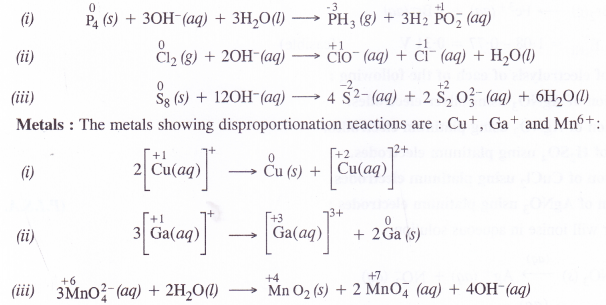 Question 25.
In the Ostwald process for the manufacture of nitric acid, the first step involves the oxidation of ammonia gas by oxygen gas to give nitric oxide and steam. What is the maximum weight of nitric oxide that can be obtained starting only with 10.0 g of ammonia and reacting with 20.0 g of oxygen ?
Answer:

Question 26.
Using the standard electrode potentials given in the table, predict if the reaction between the following is feasible.
(a) Fe3+(aq) and I–(aq)
(b) Ag+(aq) and Cu(s)
(c) Fe3+(aq) and Cu(s)
(d) Ag(s) and Fc3+(aq)
(f) Br2(aq) and Fe2+(aq).
Answer:
A particular reaction can be feasible if e.m.f. of the cell based on the E° values is positive. Keeping this in mind, let us predict the feasibility of the reactions. 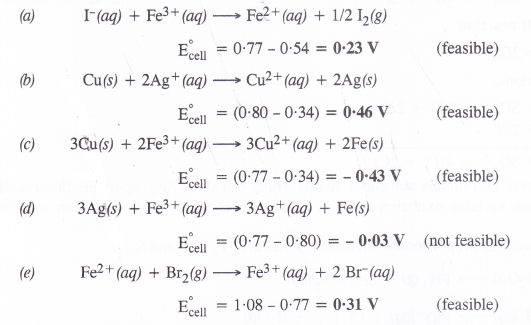 Question 27.
Predict the products of electrolysis of each of the following :

At cathode : Ag+ ions with less discharge potential are reduced in preference to H+ ions which will remain in solution. As a result, silver will be deposited at cathode.
Ag+ (aq) + e– → Ag (deposited)
At anode : An equivalent amount of silver will be oxidised to Ag+ ions by releasing electrons.

As result of electrolysis, Ag from silver anode dissolves as Ag+(aq) ions while an equivalent amount of Ag+(aq) ions from the aqueous AgNO3 solution get deposited on the cathode.

In the case, the platinum electrodes are the non-attackable electrodes. On passing current the following changes will occur at the electrodes.
At cathode : Ag+ ions will be reduced to Ag which will get deposited at the cathode.
At anode : Both NO–3 and OH– ions will migrate. But OH– ions with less discharge potential will be oxidised in preference to NO3 ions which will remain in solution.
OH- (aq) → OH + e–; 4OH → 2H2O(l) + O2 (g)
Thus, as a result of electrolysis, silver is deposited on the cathode while O2 is evolved at the anode. The solution will be acidic due to the presence of HNO3.

(3) A dilute solution of H2SO4 using platinum electrodes :
On passing current, both acid and water will ionise as follows :

The electrolysis proceeds in the same manner as discussed in the case of AgNO3 solution. Both CuCl2 and H2O will ionise as follows :

Question 28.
Arrange the following metals in the order in which they displace each other from their salts. Al, Cu, Fe, Mg and Zn
Answer:
This is based upon the relative positions of these metals in the activity series. The metal placed lower in the series can displace the metals occupying a higher position present as its salt. Based upon this, the correct order is : Mg, Al, Zn, Fe, Cu.