NCERT Solutions Class 11 Chemistry Chapter 1 Some Basic Concepts of Chemistry will help to score more marks in CBSE Board Exams.

Question 3.
Determine the empirical formula of an oxide of iron which has 69-9% iron and 30-1% oxygen by mass.
Answer:
Step I. Calculation of simplest whole number ratios of the elements

Question 13.
The pressure is determined as force per unit area of the surface. The SI unit of pressure, pascal is as shown below:
IPa = 1 Nm-2
If the mass of air at sea level is 1034 g, calculate the pressure in pascal.
Answer:

Question 14.
What is the SI unit of mass? How is it defined?
Answer:
Kilogram. It is equal to the mass of the prototype of the kilogram. It is in fact, the mass of a platinum block stored at the International Bureau of Weights and Measurements in France.

Question 15.
Match the following prefixes with their multiples

Question 16.
What do you understand by significant figures?
Answer:
We have seen that every measurement done in the laboratory involves the same error or uncertainty depending upon the limitation of the measuring instrument. In order to report scientific data, the term ‘significant figures’ has been used. According to this, all digits repotted in a given data are certain except the last one which is uncertain or doubtful. For example, let us suppose that the reading as reported by a measuring scale is 11-64. It has four digits in all. Out of the 1, 1, and 6 are certain digits while the last digit ‘4’ is uncertain. Thus, the number may be reported as follows :

Question 17.
A sample of drinking water was found to be severely contaminated with chloroform CHCI3, supposed to be a carcinogen. The level of contamination was 15 ppm (by mass)
(i) Express this in percent by mass.
(ii) Determine the molality of chloroform in the water sample.
Answer:
(i) Calculation of percent by mass
15 ppm level of contamination means that 15 parts or 15 g of chloroform (CHCI3) are present in 106 parts or 106 g of the sample i.e., water.

Question 21a.
The following data is obtained when dinitrogen and dioxygen react together to form different compounds : 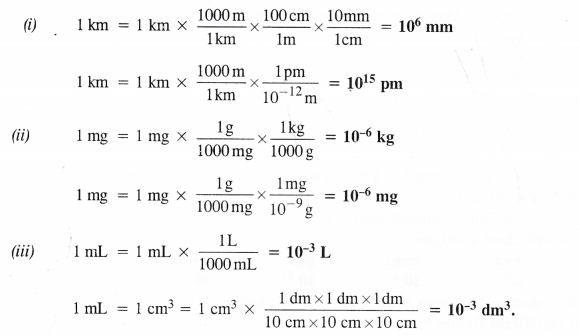 10 volumes of water vapours will be produced.

Question 32.
Use the data given in the following table to calculate the molar mass of naturally occurring argon.

Answer:
Molar mass of argon is the average molar mass and may be calculated as :

Question 34.
A welding fuel gas contains carbon and hydrogen only. Burning a small sample of it in oxygen gives 3.38 g carbon dioxide, 0.690 g water and no other products. A volume of 10.0 L (measured at NTP) of this welding gas is found to weigh 11.6 g. Calculate (i) empirical formula (ii) molar mass and (iii) molecular formula of the gas.
Answer:
Step I. Calculation of mass percent of carbon and hydrogen. 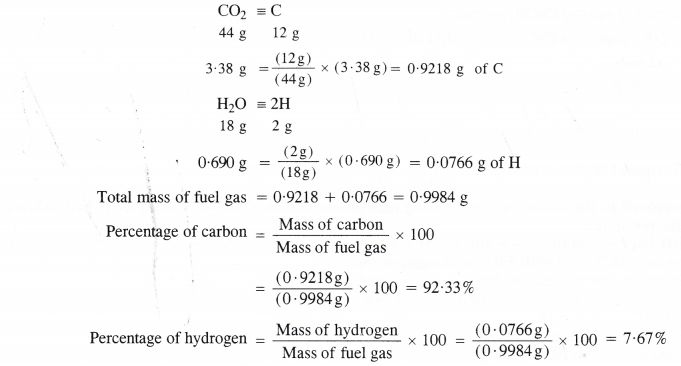 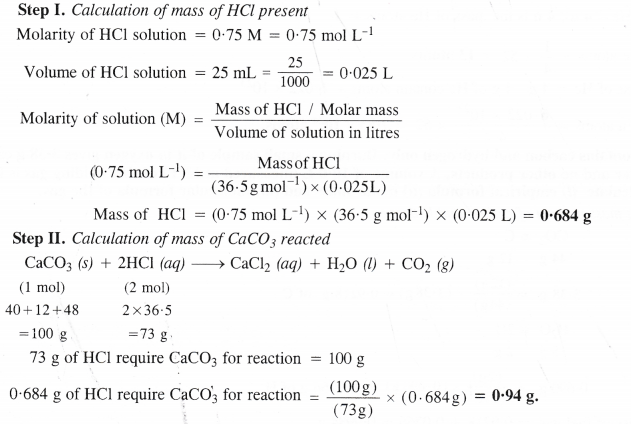 Question 36.
Chlorine is prepared in the laboratory by treating manganese dioxide (Mno2) with aqueous hydrochloric acid according to the reaction :
4HCl(aq) + MnO2(s) → MnCl2(aq) + Cl2(g) + 2H2O(l)
How many grams of HCl react with 5.0 g of manganese dioxide ?
Answer: