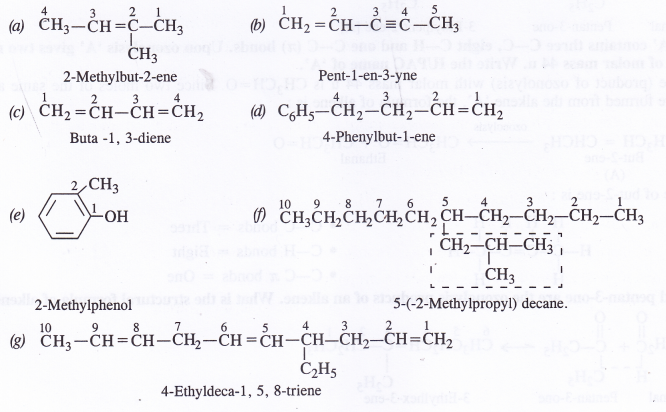 Question 4.
Write the IUPAC names of the products obtained by the ozonolysis of the following compounds :
(i) Pent-2-ene
(ii)3, 4-dimethylhept-3-ene
(iii) 2-Ethylbut-l-ene
(iv) 1-Phenylbut-l-ene.
Answer:

Question 5.
An alkene ‘A’ upon ozonolysis gives a mixture of ethanal and pentan-3-one. Write the structure and IUPAC name of ‘A’.
Answer:
The double bond is present between the carbon atoms of the two carbonyl compounds that are formed by ozonolysis.

Question 7.
Propanal and pentan-3-one are the ozonolysis products of an alkene. What is the structural formula of alkene ?
Answer:

Question 8.
Write the chemical equations for the combustion of the following hydrocarbons :
(a) Butane
(b) Pentene
(c) Hexyne
(d) Toluene.
Answer:
By definition, combustion is for one molecule (one mole) of the substance. The combustion equations may be written as : 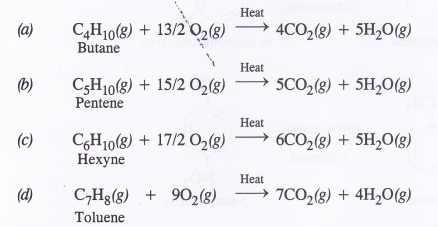 Question 9.
Draw cis and trans structures of hex-2-ene. Which isomer will have higher boiling point and why ?
Answer:

Cis isopier will have higher boiling point because of greater magnitude of dipole-dipole intractions as compared to the trans isomer.

Question 10.
Why is benzene extra-ordinary stable though it contains three double bonds ?
Answer:
It is on account of resonance shown by benzene. Moreover, there is delocalisation of π-electron charge in benzene.

Question 11.
What are tjhe necessary conditions for a system to be aromatic ?
Answer:
We have stated in our earlier discussion that benzene and arenes are aromatic in nature. In general, if a compound is to be aromatic, it must fulfil the following conditions : ,
(i) The compound must be cyclic in nature with atleast one or more double bonds in the ring.
(ii) Contrary to unsaturation as suggested by the molecular formula, it must behave like saturated compounds i.e., must resist addition and take part in the electrophilic substitution reactions.
(iii) The compound must be capable of exhibiting resonance.
(iv) The most essential criteria for the aromatic character is that the compound must obey Huckel’s rule. According the rule, a cyclic compound will behave as aromatic compound if it contains (4n + 2) π electrons, where n may be 1, 2, 3, …. etc.

Question 12.
Explain why the following systems are not aromatic ? Question 17.
Write the products of ozonolysis of 1, 2-dimethylbenzene (o-xylene). How does the result support Kekule structure of benzene ?
Answer:

All these products can be possible only in case, there are three double bonds in the ring in the alternate positions. The products of ozonolysis support Kekule structure.

Question 18.
Arrange benzene, n-hexane and ethyne in decreasing order of acidic strength. Also give reason for this behaviour.
Answer:

The catalyst helps in its polarisation which may be illustrated by the chlorination of benzene. The catalyst FeCl3 is a Lewis acid and causes the heterolysis of the chlorine molecule.

Question 20.
How will you convert following into benzene ?
(i) Ethyne
(ii) Ethene
(iii) Hexane
Answer: 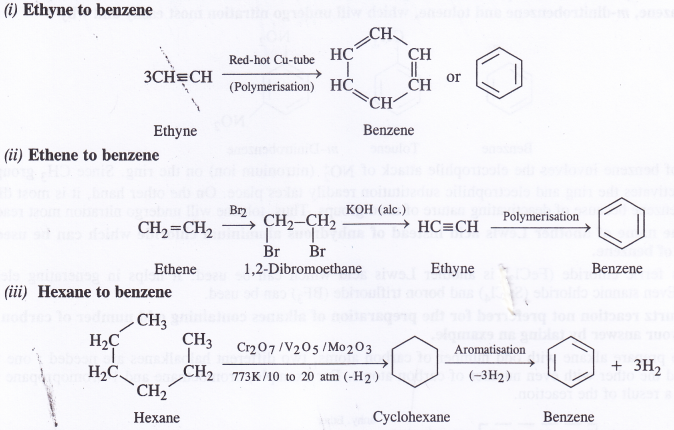 Question 21.
Write the structures of all the alkenes which upon hydrogenation give 2-methylbutane.
Answer:

(b) The correct order of decreasing reactivity is :

Methyl group is an activating group while the nitro group is deactivating in nature. In the light of this, the decreasing order of reactivity towards electrophilic attack is justified.

Question 23.
Out of benzene, /n-dinitrobenzene and toluene, which will undergo nitration most easily and why ?

Answer:
Nitration of benzene involves the electrophile attack of NO2 (nitronium ion) on the ring. Since CH3 group has +I effect, it activates the ring and electrophilic substitution readily takes place. On the other hand, it is most difficult in m-dinitrobenzene because of deactivating nature of nitro groups. Thus, toluene will undergo nitration most readily.

But side products will also be formed when the members participating in the reaction react separately. For example, bromoethane. will give butane and 1-bromopropane will give rise to hexane.

Thus, mixture of butane, pentane and hexane will be formed. It will be quite difficult to separate the individual components from the mixture.