In this chapter, students will learn about bonding in carbon –The Covalent Bond, versatile nature of Carbon, saturated and unsaturated carbon compounds, chemical properties of carbon compound, soaps and detergents.

Question 1.
What would be the electron dot structure of carbon dioxide which has the formula CO2 ?
Answer:
The atomic number (Z) for carbon is six and its electronic configuration is 2, 4. Carbon has four valence
electrons. Each oxygen atom (Z = 8) has six valence electrons (2, 6). In order to complete its octet, the carbon atom shares its four valence electrons with the four electrons of the two oxygen atoms as follows :

Thus, in carbon dioxide molecule, the carbon atom is linked to two oxygen atoms on both sides by two shared pairs of electrons resulting in double bonds on either sides. Both carbon and oxygen atoms complete their octet as a result of electron sharing.

Question 2.
What would be the electron dot structure of a molecule of sulphur which is made up of eight atoms of sulphur ?
Answer:
The atomic number (Z) of sulphur is sixteen and its electronic configuration is 2, 8, 6. The sulphur atom has six valence electrons. The chemical formula of sulphur molecule is S8. Each sulphur atom is linked to similar atoms on either sides by single covalent bonds and thus, completes its octet. The molecule is in the form of a ring also represented by crown shape.
Ring structure of S8 molecule Crown shape of S8 molecule

Question 3.
How many structural isomers you can you draw for pentane ?
Answer:
Pentane (C5H12) has a skeleton of five carbon atoms. It can exist as a straight chain as well as two branched chains. There are three structural isomers for the hydrocarbon which is an alkane.

Question 4.
What are the two properties of carbon which lead to the huge number of carbon compounds we see around us ?
Answer:

Question 5.
What will be the formula and electron dot structure of cyclopentane ? (CBSE 2013)
Answer:
Cyclopentane is a cyclic compound with formula C5H12 The structure of the compound may be represented as : 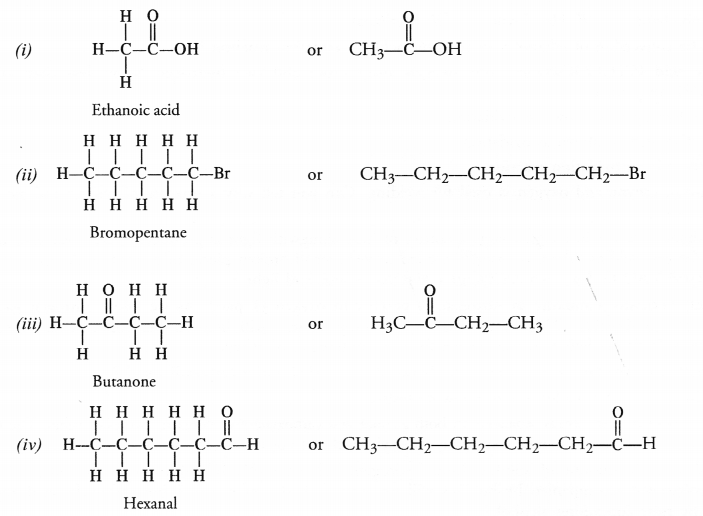 Bromopentane has a chain of five carbon atoms. It can exist in a number of forms which are structural isomers.

The structural isomers (i), (ii) and (iii) which differ in the position of the Br atom are known as position isomers.
The structural isomers (iv), (v) and (vi) which differ in the arrangement of carbon atoms in the chain are called chain isomers.
In writing the IUPAC name, the name of prefix bromo is written before that of prefix methyl. In fact, alphabetical order is followed while naming the different prefixes.

Question 7.
How would you name the following compounds ?

Question 8.
Why is the conversion of ethanol into ethanoic acid an oxidation reaction ?
Answer:
Ethanoic acid (CH3COOH) has one oxygen atom more and two hydrogen atoms less than ethanol (C2H5OH). In general,

Therefore, it is an oxidation reaction.

Question 9.
A mixture of ethyne and oxygen is used for welding. Can you tell why a mixture of ethyne and air is not used ?
Answer:
When ethyne is burnt in oxygen, large quantity of heat alongwith light is produced. The heat evolved can be used for gas welding which is usually carried to weld small broken pieces of articles made up of iron.

Question 10.
How would you distinguish experimentally between an alcohol and a carboxylic acid ?
Answer:
The distinction can be made by the following tests :

Question 12.
Would you be able to check if water is hard by using a detergent ?
Answer:
No, it is not possible. Actually detergents produce foam in any type of water ; whether hard or soft.
Therefore, a distinction between the two cannot be made. However, soaps can be used for this purpose.

Question 13.
People use a variety of methods to wash clothes. Usually after adding soap, they beat the clothes on a stone or beat them with a paddle, scrub with a brush or the mixture is agitated in a washing machine Why is this agitation necessary to get clean clothes ?
Answer:
The purpose of soap or detergent in washing is to reduce friction between oil drops carrying dirt particles and water so that they may mix with each other. All the methods that have been suggested loosen the bonds between the dust or oil particles and fabrics of clothes. The agitation helps in washing the clothes.

(b). The molecule has seven covalent bonds.

Question 4.
Explain the nature of the covalent bond using the bond formation in CH3Cl.
Answer:
The molecule of chloromethane (CH3Cl) consists of three elements i.e., carbon (Z = 6) hydrogen (Z = 1) and chlorine (Z = 17). Carbon atom has four valence electrons (2, 4) ; hydrogen has one (1) while chlorine has seven electrons in the valence shell (2, 8, 7). In order to complete its octet, carbon shares three valence electrons with three hydrogen atoms while one is shared with the electron of chlorine atom. The structure of covalent molecule may be written as follows :

Question 6.
What is homologous series ? Explain with an example.
Answer:
A series of similarly constituted compounds in which the members present have the same functional group, same chemical properties and any two successive members in a particular series differ in their molecular formula by —CH2 group and molecular mass by 14 u.
For example, the boiling points of members in the family of alkanes follow the order :

Question 7.
How can ethanol and ethanoic acid be differentiated on the basis of their physical and chemical properties ?
(CBSE Delhi 2011)

Answer:
Distinction based on physical properties :

Distinction based on chemical properties :

Question 8.
Why does micelle formation take place when soap is added to water ? Will a micelle be formed in other solvents such as ethanol also ? (CBSE Delhi 2011)
Answer:
Soap may be represented by the formula RCOO–Na+ where R is an alkyl group which represents long chain of carbon with fifteen or more atoms. Now, oil drops containing dirt particles and water donot mix. Soap helps in their mixing by reducing interfacial tension or friction. Actually it forms a sort of bridge between oil drops and water in which the alkyl portion (hydrophobic end) points towards oil drop while other portion COONa (hydrophilic end) is directed towards water. This is known as micelle formation. Thus, soap helps in the formation of a stable emulsion between oil and water. Ethanol and other similar solvents which are of organic nature, donot help in micelle formation because soap is soluble in them.

Question 9.
Why are carbon and its compounds used as fuels in most cases ?
Answer:
Carbon burns in oxygen or air to form carbon dioxide gas. The reaction is highly exothermic. That is why different forms of coal are used as fuels. The most important compounds of carbon are hydrocarbons. Just like carbon, hydrogen also readily burns in oxygen or air to form water producing heat. The hydrocarbon methane (CH4) is a constituent of natural gas. Propane (C3H8) and butane (C4H10) are present in liquid petroleum gas (L.P.G.). Petrol and kerosene also contain different hydrocarbons. Therefore, these are used as fuels.

Question 10.
Explain the formation of scum when hard water is treated with soap. (CBSE Delhi 2011)
Answer:
Soap is basically sodium or potassium salt of higher fatty acids. Hard water contains in it Ca2+ and Mg2+ ions as their salts. When soap is added to hard water, the corresponding calcium and magnesium salts are formed. These are in the form of precipitates, also called ‘scum’.

Question 11.
What change will you observe by testing soap with litmus paper (blue or red) ?
Answer:
When soap is dissolved in water, the solution is alkaline in nature due to the formation of alkali NaOH or KOH. The solution changes the colour of red litmus to blue. However, the solution does not change the colour of blue litmus.

Question 12.
What is hydrogenation ? What is its industrial application ?
Answer:
The addition of hydrogen to unsaturated hydrocarbon in the presence of a metal catalyst is also known as catalytic hydrogenation.
The reaction is extremely useful in the hydrogenation of vegetable oils also called edible oils e.g. ground nut oil, cotton seed oil etc. These are also called cooking oils and are unsaturated in the sense that their molecules contain atleast one C=C bond in their structures. Upon passing hydrogen gas through oil in the presence of nickel catalyst, the double bond changes to single bond. As a result, the unsaturated oil changes to solid fat which is of saturated nature. Vegetable ghees such as Dalda, are of saturated nature and are formed by catalytic hydrogenation reaction.

Both these hydrocarbons take part in addition reactions. For example, they react with hydrogen upon heating to 473 K in the presence of Nickel catalyst to form corresponding alkanes.

Question 14.
Give a test that can be used to differentiate between butter and cooking oil.
Answer:
Butter is saturated in nature while cooking oil is unsaturated. This means that cooking oil has atleast one C=C bond present in the constituting compounds while butter does not have any such bond. The distinction between them can be made by reacting with bromine water or bromine dissolved in carbon tetrachloride. Cooking oil will discharge the yellow colour of bromine while butter will not.

Question 15.
Explain the mechanism of cleansing action of soap.
Answer:
Cleansing action of Soaps and Detergents
Both soaps and detergents resemble in their cleansing action. They have two main parts. These are non—polar hydrocarbon chain which is water repellent or hydrophobic (phobic or phobia stands for repulsion or hatred) and the polar carboxyl group as its salt which is attracted towards water or is hydrophilic (philic stands for love or attraction). The former is called the tail of the molecule and the latter is regarded as the head.

In order to understand the cleansing action of both soaps and detergents, let us try to analyse how the clothes become dirty. They first become oily because of the perspiration coming out of the skin and also from the organic matter dispersed in the atmosphere. Dust particles stick to oil drops and the clothes become dirty. In order to wash these, they are dipped in water and soap or detergent is applied. In solution, it dissociates to give carboxylate ions (RCOO ) or sulphonate ions (RSO3–) and the cations (Na+). In the carboxylate ion, the alkyl portion which contains a long chain of hydrocarbons is a tail pointing towards the oil drops while the COO– portion is the head directed towards water. In a detergent it is the SO3– portion which points towards water. This is quite evident from the figure where the solid circles (•) represent the polar groups and the wavy lines (^^^) represent the alkyl portions. The molecules of soap or detergent have a unique orientation in water. They actually form a cluster of molecules in which the hydrophobic or alkyl portion is in the interior while the ionic or polar portion is on the surface of the cluster as shown in the figure. This formation is known as micellear formation or simply micelle. Soaps or detergent thus help in forming a stable emulsion of oil and water by acting as a bridge between the two. The oil droplets alongwith the particles of the dirt get detached from the fibres of the clothes and pass into the emulsion. In this manner, the clothes become free from dust or dirt.

Download the free PDF of Chapter 4 Carbon and Its Compounds or save the solution images and take the print out to keep it handy for your exam preparation.

Hope given NCERT Solutions for Class 10 Science Chapter 4 helpful to you.