Variation of Molar Conductivity With Concentration

Based on the above such results, Kohlraush deduced the following empirical relationship between the molar conductance (Λm) and the concentration of the electrolyte (C).

The above equation represents a straight line of the form y = mx + c. Hence, the plot of Λm Vs \(\sqrt{C}\) gives a straight line with a negative slope of – k and the y intercept. Λ°m. Where Λ°m is called the limiting molar value in very dilute solutions.

For strong electrolytes such as KCl, NaCl etc., the plot, Λm Vs \(\sqrt{C}\), gives a straight line as shown in the graph (9.4). It is also observed that the plot is not a linear one for weak electrolytes.

For a strong electrolyte, at high concentration, the number of constituent ions of the electrolyte in a given volume is high and hence the attractive force between the oppositely charged ions is also high. Moreover the ions also experience a viscous drag due to greater solvation. 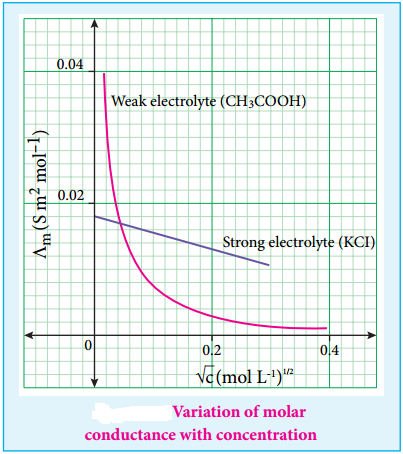 They considered that each ion is surrounded by an ionic atmosphere of opposite sign, and derived an expression relating the molar conductance of strong electrolytes with the concentration by assuming complete dissociation. Later, the equation was further developed by Onsager. For a uni – univalent electrolyte the Debye Huckel and Onsager equation is given below.

Where A and B are the constants which depend only on the nature of the solvent and temperature. The expression for A and B are

Here, D is the dielectric constant of the medium, η the viscosity of the medium and T the temperature in Kelvin.

In general, according to Kohlraush’s law, the molar conductivity at infinite dilution for a electrolyte represented by the formula AxBy, is given below.

Kohlraush arrived the above mentioned relationship based on the experimental observations such as the one as shown in the table. These result show that at infinite dilution each constituent ion of the electrolyte makes a definite contribution towards the molar conductance of the electrolyte irrespective of nature of other ion with which it is associated i.e;

1. Calculation of Molar Conductance at Infinite Dilution of a Weak Electrolyte.

It is impossible to determine the molar conductance at infinite dilution for weak electrolytes experimentally. However, the same can be calculated using Kohlraush’s Law.

For example, the molar conductance of CH3COOH, can be calculated using the experimentally determined molar conductivities of strong electrolytes HCl, NaCl and CH3COONa. 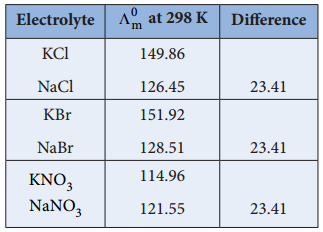 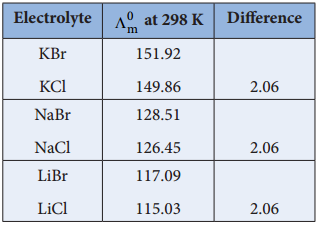 2. Calculation of Degree of Dissociation of Weak Electrolytes

Substitute α value in the above expression (9.15) 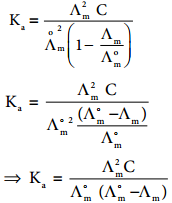 Substances like AgCl, PbSO4etc., are sparingly soluble in water. The solubility product of such substances can be determined using conductivity measurements.

Let us consider AgCl as an example

Ksp = C.C
⇒ Ksp = C2
We know that the concentration (in mol dm-3) is related to the molar and specific conductance by the following expressions

Substitute the concentration value in the relation Ksp = C2