NCERT Solutions for Class 12 Chemistry Chapter 16 is the best study material for all the students. It not only prepares them for the board exams but also strengthens their concepts for competitive exams such as NEET and JEE.

The solutions are provided by subject mater experts and are accurate. The diagrammatic representations make it even easier for the students to understand. The students appearing for UP board, MP board, Gujarat board, CBSE find the NCERT Solutions beneficial while preparing for the exams.

The students are advised to go through the NCERT solutions for Class 12 Chemstry for better understanding of the concepts provided in the chapter.

Question 1:
Sleeping pills are recommended by doctors to the patients suffering from sleeplessness but it is not advisable to take their doses without consultation with the doctor. Why?
Answer:
Sleeping pills contain drugs which may be tranquilizers or antidepressants. They affect the nervous system and induce sleep. However, if these doses are not properly controlled, they may create havoc. They even adversely affect the vital organs of the body. It is advisable to take these sleeping pills under the strict supervision of a doctor.

Question 2.
With refrence to which classification has the statement “ranitidine is an antacid”, been given?
Answer:
This statement refers to the classification of drugs according to pharmacological effect because any drug which will be used to neutralise the excess acid present in the stomach will be called an antacid.

Question 3.
Why do we require artificial sweetening agents?
Answer:
The commonly used sweetening agent i.e., sucrose is a carbohydrate with molecular formula C12H22O11. Since it has high calorific value, it is not recommended to the patients, diabetics in particular which require low calorie diet. Most of the artificial sweeteners are better than sucrose but hardly provide any calories to the body. These are being used as substitutes of sugar. 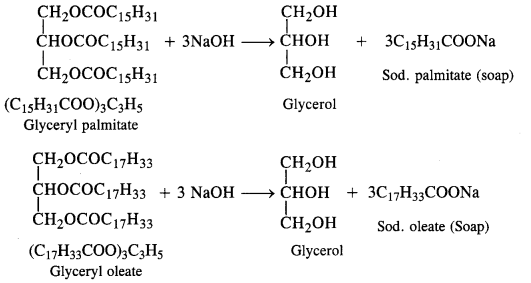 Question 5.
Label the hydrophilic and hydrophobic parts in the following molecule which is a detergent. Also identify the functional group(s) present.

Question 3.
Name the macromolecules that are chosen as drug targets.
Answer:
The different macromolecules or biomolecules which are used as drug targets are carbohydrates, proteins, enzymes, nucleic acids. Out of these, enzymes are the most significant because their deficiency leads to many disorders in the body.

Question 5.
Define the term chemotherapy. (C.B.S.E. Delhi 2008)
Answer:
The branch of chemistry which deals with the treatment of diseases using chemicals is called chemotherapy.

Question 6.
Which forces are involved in holding the drugs to the active sites of enzymes?
Answer:
These are different intermolecular forces like dipolar forces, hydrogen bonding, van der Waals’ forces etc. The receptor targets have specific roles to perform. They help in transferring message from messengers to the cell. The messengers are in fact chemical compounds which are received by the active sites of the receptor proteins that project out of the surface. In order to accommodate these, the receptors may undergo a change in shape. The receptors are held by the active sites also called binding sites. Once the message is transferred to the cells.

Question 8.
Low level of noradrenaline is the cause of depression. What type of drugs are needed to cure this problem ? Name two drugs (C.B.S.E. Outside Delhi 2008 Supp.)
Answer:
Low level of noradrenaline which acts as a neurotransmitter reduces the signal sending ability to the nerves and the patient suffers from depression. Antidepressants are needed to give relief from depression. These are also called tranquilizers or neurologically active drugs. The two specific drugs are iproniazid and phenelzine.

Question 10.
How do antiseptics differ from disinfectants? Give one example of each.
Answer:

Iodine is an example of a strong antiseptic Tincture of iodine (2-3 percent of the solution of iodine in the alcohol-water mixture) is applied to wounds 1 percent solution of phenol is used as a disinfectant.

Question 11.
Why are cimetidine and ranitidine better antacids than sodium bicarbonate or magnesium or aluminium hydroxides?
Answer:
Both sodium bicarbonate and hydroxides of magnesium or aluminium are very good antacids since they neutralise the acidity in the stomach. But their prolonged use can cause the secretion of excessive acid in the stomach. This may be quite harmful and may lead to the formation of ulcers. Both cimetidine and ranitidine are better salts without any side effects.

Question 15.
What are food preservatives?
Answer:
Chemical substances which are used to protect food against bacteria, yeasts and moulds are called preservatives. For example, sodium benzoate and sodium metabisulphite.

Question 17.
What are artificial sweetening agents? Give two examples.
Answer:
Carbohydrates in the form of sugar (sucrose) are the traditional sweeteners and are the essential constituents of our diet. In the present lifestyle, people lack physical activities and exercise and it becomes rather difficult to burn the extra calories that are produced by the carbohydrates. Chemists have provided certain chemicals known as artificial sweeteners which provide the desired sweet taste io the food articles but hardly affect the calorie intake by the body. The most popular among the artificial sweeteners is saccharin which is nearly 550 times more sweet than the cane sugar. It is a boon for diabetic patients who don’t want to take carbohydrates (sugar) which is likely to increase the calories. It is in fact, a life saviour for these patients and is in the form of sodium or calcium salt which is water-soluble. These days, a number of other sweeteners are also available, e.g.. Aspartame, Alitame, Sucrolose etc. 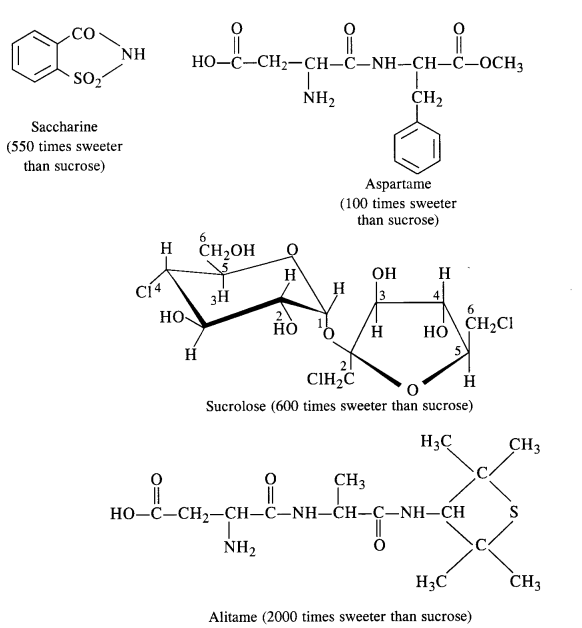 (a) Aspartame: It is a very successful and commonly used artificial sweetener. As stated above, it is nearly 100 times as
sweet as cane sugar. However, it can be used in soft drinks and cold foods only since it decomposes upon heating. Chemically
aspartame is the methyl ester of dipeptide formed by the action of aspartic acid with phenylalanine.
(b) Sucrolose: The artificial sweetener as the name suggests is a trichioroderivative of sucrose. It is better, than
aspartame in the sense that it can be used in hot food at the cooking temperature, since it does not decompose on heating.
Moreover, it does not provide calories.

Question 19.
What problem arises by using alitame as an artificial sweetener?
Answer:
Alitame is no doubt, a very potent sweetener. Its sweetening capacity is more than 2000 times as compared to ordinary cane sugar or sucrose. But sometimes, it becomes quite difficult to control the sweetness level in the food which is actually desired.

Question 21.
Explain the following terms with suitable examples.
(a) Cationic detergents
(b) Anionic detergents
(c) Neutral detergents.
Answer:
1. Anionic Detergents: These detergents contain anionic hydrophilic groups. These are generally made from long-chain alcohols which are reacted with concentrated sulphuric acid to form alkyl hydrogen sulphates. These are then neutralised with alkali to give water-soluble salts.
A few examples are listed below :
Sodium Alkyl Sulphates: These are the sodium salts of sulphonic acid esters of long-chain aliphatic alcohols which normally contain 10 to 15 carbon atoms. The alcohols are formed from fats and oils as a result of hydrogenolysis.

Sodium Alkyl Benzene Suiphonates: A common detergent belonging to this class is Sod – p – dodecyl benzene sulphonate. It is obtained from benzene by reacting with dodecyl chloride in the presence of anhydrous AlCl3 acting as a catalyst.
The different steps involved are as follows :

2. Cationic Detergents: In these detergents, the hydrophilic group is of cationic nature. These are generally acetates, chlorides or bromides of quaternary ammonium CH CH CH B salts. The cationic part enclosed in the bracket contains a long hydrocarbon chain. These  detergents have germicidal qualities and are quite expensive as well, The cationic CH3 detergents are present in hair conditioners. Cetyl trimethyl ammonium bromide

3. Non-ionic or neutral Detergent: These detergents are simply long-chain organic compounds and are esters in nature. For example, stearic acid and polyethylene glycol react to form a non-ionic detergent.

Non-ionic detergents contain polar groups and form hydrogen bonds with water. Some dishwashing liquids contain non-ionic detergents.
The field of detergents is very vast because of their immense utility. Companies engaged in their manufacture are spending huge amounts of money to bring products of better quality.

Question 25.
Explain the cleansing action of soaps.
Answer:
In order to understand the cleansing action of soaps let us try to analyse how the clothes become dirty. They first become oily because of the perspiration coming out of the skin and also from the organic matter dispersed in the atmosphere. Dust particles stick to oil drops and the clothes become dirty. In order to wash these, they are dipped in water and soap is applied. 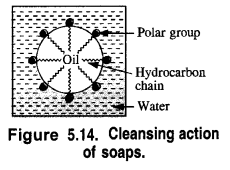 In solution, it dissociates to give carboxylate ions (RCOO–) and the cations (Na+). The alkyl portion which contains a long chain of hydrocarbons is a tail pointing towards the oil drops while the COO portion is the head directed towards water. This is quite evident from the figure where the solid circles (.) represent the polar groups and the wavy lines represent the alkyl portions. This formation is known as micelle and helps in forming a stable emulsion of oil and water by acting as a bridge between the two. The oil droplets along with the particles of the dirt get detached from the fibres of the clothes and pass into the emulsion. In this manner, the clothes become free from dust or dirt. The cleansing action of the soap is depicted in the Fig. 5.15.