NCERT Class 12 Chemistry Solutions for Chapter 9 Coordination Compounds provides in-depth knowledge of the concepts given in the chapter. It helps the students prepare well for boards as well as competitive exams. It also helps the students strengthen their basics for advanced concepts.

The students appearing for UP board, MP board, CBSE, Gujarat board, Maharashtra board, etc. can refer to these NCERT Solutions and score well in the examination.

A thorough knowledge of the basic concepts helps the students while studying the advanced concepts. This not only helps them during boards and home exams but also during competitive exams.

Question 2.
Write the IUPAC names of the following coordination compounds:

(ii) The cis isomer can also exist as pair of optical isomers.

Question 4.
Give evidence to show that [Co(NH3)5Cl]SO4 and [CO(NH3)5SO4]Cl exist as ionisation isomers.
Answer:
Dissolve both the complexes separately in water. First add a few drops of BaCl2 solution to both these complexes. Only one of these will give white precipitate with the solution indicating that SO4 is not a part of complex entity. If exists as an anion.

Now again add a few drops of AgN03 solution to both these complexes. Only one of these will give white precipitate with the solution indicating that in this case Cl is not a part of complex entity. It exists as anion.

This shows that the complexes exist as pair of ionisation isomers. 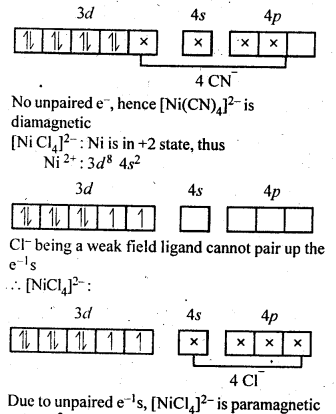 Question 6.
[MCl4]2- is paramagnetic while [Ni(CO)4] is diamagnetic though both are tetrahedral. Why ? (C.B.S.E. Outside Delhi2012)
Answer:
In the complex [NiCl4]2-, Ni is in + 2 oxidation state and has the configuration 3d840. The CL ion being a weak ligand cannot pair the two unpaired electrons present in 3d orbitals. This means that 3d orbitals are not involved in hybridisation. The complex is sp3 hybridised (tetrahedral) and is paramagnetic in nature. In the other complex [Ni(CO)4], the oxidation state of Ni is zero and electronic configuration is 3d84s2. In the presence of the ligand CO, the 4s electrons shift to the two half filled 3d orbitals and make all the electrons paired. The valence 4s and 3p orbitals are involved in hybridisation. The complex is tetrahedral but diamagnetic. For more details, consult text part.

Question 7.
[Fe(H2O)6]3+ is strongly paramagnetic whereas [Fe(CN)6]3- is weakly paramagnetic. Explain.
Answer:
Outer electronic configuration of iron (Z = 26) in-ground state is 3d64s2. Iron in this complex is in +3 oxidation state. Iron achieves +3 oxidation state by the loss of two 4s electrons and one 3d electron. The resulting Fe3+ ion has outer electronic configuration of 3d5. Since H2O is not a strong field ligand, it is unable to cause electron pairing.

Question 8.
Explain [Co(NH3)6]3+ is an inner orbital complex while [Ni(NH3)6]2+ is an outer orbital complex.
Answer:
In the complex [Co(NH3)6]3+, the oxidation state of cobalt is +3 and has 3d6 configuration. In the presence of NH3 molecules (ligands), two 3d electrons pair up and two 3d orbitals remain empty. Since six ligands are to be accommodated the hybridisation of the metal ion is d2sp3.

The complex is paramagnetic as well as outer orbital complex since outer (4d) electrons are involved in the hybridisation.

Question 9.
Predict the number of unpaired electrons in the square planar [Pt(CN)4]2- ion.
Answer:
The element Pt(Z = 78) is present in group 10 with electronic configuration 5d96s1. The divalent cation Pt2+ has 5d8 configuration. 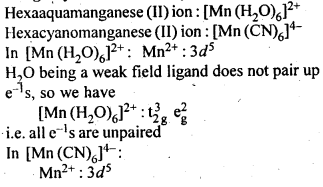 Question 11.
Calculate the overall complex dissociation equilibrium constant for [Cu(NH3)4]2+ ion, given that p4 for the complex is 2·1 x 1013.
Answer:
The dissociation constant is the reciprocal of overall stability constant (β4)

Question 1.
Explain bonding in co-ordination compounds in terms of Werner’s postulates.
Answer:
Werner’s coordination theory: Alfred Werner gave his co-ordination theory in 1893. The important postulates of this theory are:
(i) All metals in atomic or ionic form exhibit two types of valencies in coordination compounds :
(a) Primary or principal or ionic valency (—–),
(b) Secondary or auxiliary or nonionic valency (—).
The primary valency is ionizable and it is shown by dotted lines. The secondary valency is non-ionizable and is shown by a continuous line.
(ii) Primary valency represents oxidation states of a metal atom or ion and secondary valency represents the co-ordination number of metal ion which is fixed for a particular atom.
(iii) The primary valencies are satisfied by negative ions whereas the secondary valencies may be satisfied either by negative ions (e.g., Cl–, Br–, CN– etc.) or neutral molecules (ag., H2O).
(iv) Secondary valencies are directed towards a fixed position in space.
(v) Every element tends to satisfy both its primary and secondary valencies. For this purpose a negative ion may often act a dual behaviour i.e., it may satisfy primary as well as secondary valency (—–,-).
Example : (i) Luteo cobaltic chloride CoCl3.6NH3 or [Co(NH3)6]Cl3.
(ii) Purpureo cobaltic chloride COC13.5NH3 or [Co(NH3)5Cl]Cl2

Question 3.
Explain with two examples each of the following:
coordination entity, ligand, coordination number, coordination polyhedron, homoleptic and heterolepic.
Answer:
(a) Co-ordination Entity: A coordination complex or entity is the species enclosed in square bracket. It is also called co-ordinate sphere. It contains in it a certain metal atom or ion to which a fixed number of neutral molecules or ions capable of donating electron pairs are linked with co-ordinate bonds. e.g. [COCl3(NH3)3]

(b) Ligand: Ligands are the electron donor molecules or ions which may be either neutral, or anionic (sometimes cationic as well) and are linked to the central metal atom or ion by co-ordinate bonds also called dative bonds. In fact, the electrons needed for the bond are provided by the ligands. e.g. H2NCH2CH2NH2 or N(CH2CH2NH2)3

Question 4.
What is meant by unidentate, didentate and ambidentate ligands ? Give two examples for each.
Answer:
Unidentate ligands are those which bind to the metal ion through a single donor atom, e.g., Cl– , H2O.

Bidentate ligands are those which bind to the metal ion through two donor atoms. e.g., ethane-1,2-diamine (H2NCH2CH2NH2), oxalate (C2O42-) ion.

Ambidentate ligands are those which can bind to metal ion through two different donor atoms, e.g., NO2– and SCN– ion.

(iv) Coordination isomerism : This type of isomerism arises from the interchange of ligands between cationic and anionic entities of different metal ions present in a complex. An example is provided by [Co(NH3)6] [Cr(CN)6], in which the NH3 ligands are bound to CO3+ and the CN– ligands to Cr3+. In its coordination isomer [Cr(NH3)6][CO(CN)6], the NH3 ligands are bound to Cr3+ and the CN– ligands to CO3+.

Optical isomerism is generally not shown by the square planar complexes with CN = 4.

Question 13.
Aqueous copper sulphate solution (blue in colour) gives (a) green precipitate with aqueous potassium fluoride and (b) a bright green solution with aqueous potassium chloride solutions. Explain these experimental results.
Answer:
Aqueous solution of copper sulphate which is blue in colour exists as [Cu(H2O)4]SO4 and gives [Cu(H2O)4]2+ in solution. It is a labile complex entity in which the ligands H2O get easily replaced by F– ions of KF and by Cl– ions of KCl.

(b) Hexafluoriodoferrate(II) ion [FeF6]3-: Iron in this complex is in +2 oxidation state. Iron achieves + 2 oxidation state by the loss of two 4s electrons. The resulting Fe2+ ion has outer electronic configuration of 3d6.

(d) Hexafluorocobaltate(III) [CoF6]3-: Cobalt ion in the complex is in + 3 oxidation state. Cobalt achieves + 3 oxidation state by the loss of two 4s electrons and one 3d electron. The resulting Co3 + ion has outer electronic configuration of 3d6.

Question 16.
Draw figure to show the splitting of d-orbitals in octahedral crystal field.
Answer:
Let us assume that the six ligands are positioned symmetrically along the Cartesian axes, with a metal atom at the origin.

As the ligands approach, first there is an increase in energy of d-orbitals relative to that of the free ion just as would be the case in a spherical field.

The orbitals lying along the axes (dz2 and dx2 – y2) get repelled more strongly than dxy, dyz and dzx orbitals which have lobes directed between the axes.

Question 18.
What is crystal field splitting energy ? How does the magnitude of ∆0 decide the actual configuration of d- orbitals in a coordination entity ?
Answer:
The degenerate d-orbitals (in a spherical field environment) split two-level i.e. eg and t2g in the presence of ligands. The splitting of the degenerate orbitals in the presence of ligands is called crystal field splitting and the energy difference between the two levels (e and t2g) is called the crystal field splitting energy. It is denoted by ∆o. After the orbitals have split, the filling of the electrons takes place. After 1 electron (each) has filled in the three t2g orbitals, the filling of the electrons takes place in 2 ways.

Question 19.
[Cr(NH3)6]3+ is paramagnetic while [Ni(CN)4]2- is diamagnetic. Explain why?
Answer:
(i) Hexaamminechromium(III) ion [Cr(NH3)6]3+: Outer electronic configuration of chromium (Z=24) in ground state is 3d24s1 and in this complex, it is in the +3 oxidation state. Chromium achieves +3 oxidation state by the loss of one 4s electron and two 3d-electrons. The resulting Cr3+ ion has outer electronic configuration of 3d3.

Since H2P molecules represent weak field ligands, they do not cause any electron pairing. As a result the complex has two unpaired electrons and is coloured. The d-d transitions absorb radiations corresponding to a red light and the complementary colour emitted is green.
Formation of [Ni(CN)4]2-. For the details of the structure of the complex,

Since the complex has no unpaired electrons there is no scope for any d-d transition. The complex is therefore, colourless.

Question 21.
[Fe(CN)6]4- and [Fe(H2O)6]2+ are of different cdlours in dilute solutions. Why?
Answer:
In both the complexes, Fe is in +2 state with the configuration 3d6 i.e., it has four unpaired electrons. As the ligand H2O and CN– possess different crystal field splitting energy (∆0), they absorb different components of the visible light (VIBGYOR) for the transition. Hence, the transmitted colours are different.

Question 22.
Discuss the nature of bonding in metal carbonyls.
Answer:
The metal-carbon bond in metal carbonyls possess both s and p character. The M-C σ bond is formed by the donation of lone pair of electrons on the carbonyl carbon into a vacant orbital of the metal. The M-C π bond is formed by the donation of a pair of electrons from a filled d-orbital of metal into the vacant antibonding π* orbital of carbon monoxide. The metal to ligand bonding creates a synergic effect which strengthens the bond between CO and the metal.

then, the larger the stability constant, the higher is the proportion of ML4 that exists in the solution. Free metal ions rarely exist in the solution so that M will usually be surrounded by solvent molecules which will compete with the ligand molecules, L, and be successively replaced by them. For simplicity, we generally ignore these solvent molecules and write four stability constants as follows : 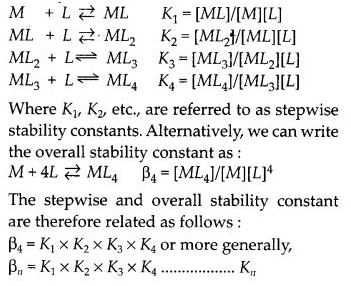 Question 26.
What is meant by chelate effect ? Give an example.
Answer:
When a ligand attaches to the metal ion in a manner that form’s a ring, then the metal-ligand association is found to be more stable. In other words, we can say that complexes containing chelate ring more stable than complexes without rings. This is known as the chelate effect.
Examples: EDTA, DMG, etc.

(iv) Role of coordination compounds in interaction or metallurgy of metals: The process of extraction of some of the metals from their ores involves the formation of complexes. For example in an aqueous solution, gold combines with cyanide ions to form [Au (CN)2]. From this solution, gold is later extracted by the addition of Zn metal.

Therefore, (c) is the correct answer.