Question 1.
Discuss how classification systems have undergone several changes over a period of time?
Solution:
The classification was born instinctively out of a need to all organisms for our own use since the dawn of civilization. Aristotle was the earliest to attempt a more scientific basis for classification. He used simple morphological characteristics to classify plants into trees, herbs and shrubs. He also divided animals into Animals with red blood and those who do not have red blood. Linnaeus proposed a two-kingdom system of classification with Plantae and Animalia including plants and animals respectively.

The above system did not distinguish eukaryotes and prokaryotes, unicellular and multicellular, photosynthetic and non-photosynthetic organisms. A need was felt for including besides gross morphology, other characteristics like cell structure, nature of cell wall, mode of nutrition, habitat, method of reproduction, evolutionary relationships etc., Recently R.H. Whittaker proposed a five-kingdom classification to answer above the Five kingdoms are

Question 2.
State two economically important uses of
(a) heterotrophic bacteria
(b) archaebacteria
Solution:
(a) Heterotropic bacteria : These bacteria are natural scavengers. The souring of milk into lactic acid and alcohol to vinegar is brought about by some saprophytic bacteria, e.g., Lactic acid bacteria and acetic acid bacteria respectively.
A number of antibiotic are extracted from actinomycetes especially from the genus Streptomyces e.g. Streptomycin, Chloramphenicol, Oilorotetracycline, Erythromycin, Terramycin etc.
(b) Archaebacteria live as symbionts in the rumen of herbivorous animals.
Methanogens are present in the guts of several ruminant animals such as cows and buffaloes and they are responsible for the production of methane (biogas) from the dung of these animals.

Question 3.
What is the nature of the cell wall in diatoms?
Solution:
In diatoms, ail walls form two thin overlapping shells which fit together as in a soapbox. The walls are embedded with silica and thus the walls are indestructible. Thus diatoms have left behind a large amount of cell wall deposits in their habitat.

Question 4.
Find out what do the terms ‘algal bloom’ and ‘red tides’ signify?
Solution:
Algal bloom : When colour of water changes due to profuse growth of coloured phytoplankton, it is called algal bloom.
Red tides : Redness of the red sea is due to luxurient growth of Trichodesrium erythrium, a member of cynobacteria (blue green alage).

Question 5.
How are viroids different from viruses?
Solution:
Viroids are simpler than viruses, consisting of
a single RNA molecule that is not covered by protein capsid. The genetic material of viruses are surrounded by protein coat.

Question 7.
Plants are autotrophic. Can you think of some plants that are partly hetrotrophic?
Solution:
Bladderwort and venus fly trap are examples of insectivorous plants and Cuscuta is a parasite. These are plants which are partially heterotrophic.

Question 9.
Give a comparative account of the classes of kingdom fungi under the following:
(a) Mode of nutrition
(b) Mode of reproduction
Solution:
Kingdom fungi has four classes, these are Phycomycetes, ascomycetes, basidiomycetes and Deuteromycetes. The comparison between these classes are as follows :

Question 11.
Give a brief account of viruses with respect to their structure and the nature of genetic material. Also, name four common viral diseases.
Solution:
Viruses have the following characteristics:
(i) All plant viruses have single-stranded RNA and all animal viruses have either single or double-stranded RNA or double-stranded DNA.
(ii) Protein vims also contain genetic material RNA or DNA. A vims is a nucleoprotein and the genetic material is infectious, These are obligate parasites, self replicating, non-cellular organisms.
(iii) Vimses are smaller than bacteria and their genetic material is surrounded by protein I coat called capsid. Capsid is made up of small subunits called capsomeres.
Four common viral diseases are :
(a) Cough and cold
(b) Mumps
(c) Influenza
(d) Smallpox

Question 2.
Name the two kingdoms of the living world proposed by Linnaeus.
Solution:
Plantae and Animalia

Question 3.
What are protists?
Solution:
Protists are unicellular, eukaryotic organisms.

Question 4.
Which organism was earlier placed in the plant as well as animal kingdoms and why?
Solution:
Euglena because it has locomotory organelle, flexible pellicle, contractile vacuole and reproduce by binary fission like animals and chloroplasts and pyrenoids like plants.

Question 5.
Name the 5 kingdoms of organisms in the order of their supposed evolution.
Solution:
Monera, Protista, Fungi, Animalia and Plantae.

Question 8.
What is a retrovirus? Give an example
Solution:
Retrovirus is organisms that have RNA s as genetic material. For example HTV

Question 1.
Cyanobacteria play a major role in our ecology. Discuss.
Solution:
Cyanobacteria, also known as ‘blue-green algae’ help in carbon fixation in a major way on the ocean surface.

They are helpful in nitrogen fixation in paddy fields leading to a better harvest. About 80% of photosynthesis on ocean surface is done by cyanobacteria. So, it can be said that they play a major role in our ecology.

Question 2.
What is the role of methanogens?
Solution:
Methanogens are type of bacteria which live in the gut of ruminating animals.

They assist those animals in digestion and the byproduct of that digestive process is methane.

More number of livestock population results in increased methane level in the environment leading to global warming. So, indirectly methanogens can be responsible for global warming.

Question 3.
What are lichens? What are the roles of lichen in water pollution ?
Solution:
Lichens are symbiotic associations i.e. mutually useful associations, between algae and fungi.

The algal component is known as phycobiont and fungal component as mycobiont, which are autotrophic and heterotrophic, respectively.

Algae prepare food for fungi and fungi provide shelter and absorb mineral nutrients and water for its partner. Lichens are very good pollution indicators as they do not grow in polluted areas.

Question 4.
On what factors is the 5 kingdom classification of Whittaker based?
Solution:
The five kingdom classification is based upon the following factors :
(i) Complexity of cell structure – Prokaryotes or Eukaryotes
(ii) Complexity of organisms body – Unicellular or Multicellular
(iii) Mode of obtaining nutrition – Autotrophs or Heterotrophs
(iv) Phylogenetic relationships

Question 5.
Give the technical terms used for the following:
(a) Remains of an organism of a former geological age.
(b) Science of classification of organisms.
(c) Evolutionary history of a group of organisms.
(d) Organisms which synthesize their own food, using chemical energy.
Solution:
(a) Fossils
(b) Taxonomy
(c) Evolution
(d) Autotrophs

Question 6.
What are the kinds (shapewise) bacteria found in nature. Name the pathogen with the disease caused
Solution: 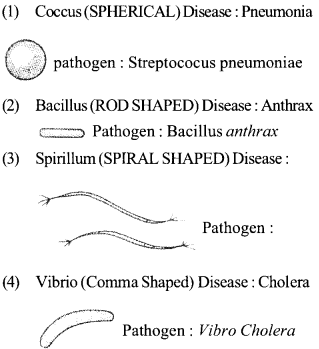 Question 1.
Give an account of early work in taxonomy.
Solution:

Question 3.
Give the economic importance of diatoms. Diatoms are used
Solution:
(1) as a cleaning agent in tooth pastes and metal polishes.
(2) Adding to make sound proof rooms.
(3) In Alteration of sugar, alcohol and antibiotics
(4) as put in paints to ad the paint visibility at night
(5) as an insulating material in Refrigerators, fumances etc.

Question 4.
What are the distinguishing characters of kingdom fungi?
Solution:
The distinguishing characters of kingdom fungiare as follows :
(i) Fungi are non-vascular, non-seeded, non-flowering, eukaryotic achlorophyllous (nongreen), heterophic (heterophytic) spore bearing, thalloid, multicellular decomposers and mineralisers of organic wastes and help in recycling of matter in the biosphere.
(ii) In true fungi the plant body is thallus. It may be non-mycelial or mycelial.
a. Non mycelial: The non-mycelial forms are unicellular; however they may form a pseudomycelium by budding,
b. Mycelial: In mycelial form plant body is made up of thread like structures called hyphae. Hyphae are usually branched tube like structure bounded by a cell-wall of chitin. The hyphae may be septate (higher fungi) or aseptate (lower fungi).
Septate hyphae may be of 3 kinds, uninucleate (monokaryotic hyphae), with binucleate cells (dikaryotic hyphae) ormultinucleate. Some fungi are aseptate and known as coenocytic fungi, with hundreds of nuclei in continuous cytoplasmic mass.
(iii) The cell shows eukaryotic organization but lack chloroplast and Golgi bodies. The genetic material is DNA and mitosis is intracellular (karyochorisis).
(iv) Fungi lack chlorophyll, hence, they do not prepare food by photosynthesis. Thus they can grow everywhere, where organic material is available.
(v) Fungi are heterotrophs that acquire their nutrient by absorption. They store their food in the form of glycogen.
(vi) The primitive fungi have oogamous type of sexual reproduction where as most advanced ones do not have sexual reproduction.

Question 5.
Compare the main features of Monera with Protista.
Solution: 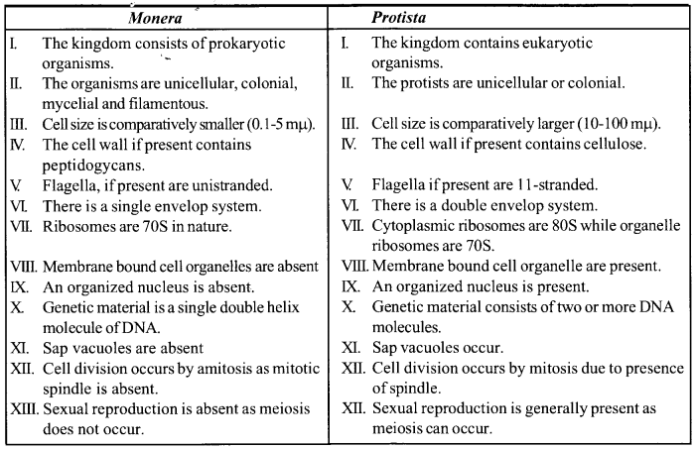