Question 1.
What is the basis of the classification of algae?
Solution:
Classification of Algae: The algae are divided into three main classes: Chlorophyceae, Phaeophyceae, and Rhodophyceae.

Question 2.
When and where does reduction division take place in the life cycle of a liverwort, a moss, a fern, a gymnosperm and an angiosperm?
Solution:
I. Liverwort – The main part of the body of liverwort is thalloid. Haploid gametes are produced from the male and female sex organs garnets fuses to form zygote. Zygote develops in the form of sporophytes. These sporophytes are further differentiated into foot, seta and capsule. As a result of reduction division many haploid spores are produced in capsule.
II. Moss – In the first stage in moss primary protonema develops into secondary ’ protonema. Both these stages are haploid. Zygote formed by the fusion of gametes further produce sporophytes.
III. Fern – Leaves of sporophyte bear sporangia in which spores are produced by reduction division in meiosis.
IV. Gymnosperm – In microsporophylls and megasporophylls that bear microsporangia and megasporangia respectively, reduction division occurs to produce microspores (pollen grains) and megaspore.
V. Angiosperm – Main part of the body is sporophytic and bears flowers. Reduction division takes place in anthers of stamen i.e. haploid pollen grains and in the ovary of pistil producing eggs.

Question 3.
Name three groups of plants that bear archegonia. Briefly describe the life cycle of any one of them.
Solution:

Archegonia is the female reproductive organ of

The life cycle of gymnosperms: The gymnosperms are heterosporous, they produce haploid microspores and megaspores. The two kinds of spores are produced within sporangia that are borne oil sporophylls which are arranged spirally along an axis to form lax or compact strobili or cones.
The strobili bearing microsporophylls and microsporangia are called microsporangia or male strobili. The microspores develop into a male gametophytic generation which is highly reduced and is confined to only a limited number of cells. This reduced gametophyte is called pollen-grain. The development of pollen- grains takes place within the microsporangia.

The cones Rearing megasporophylls with ovules or megasporangia are called microsporangia or female strobili. The male or female cones or strobili may be borne on the same tree or on different trees. The megaspore mother cell is differentiated from one of the cells of the nucellus. The nucellus is protected by envelopes and the composite structure is called an ovule.

The ovules are borne on megasporophylls which may be clustered to form the female cones. The female cones are borne on the main plant body of the sporophyte. The megaspore mother cell divides meiotically to form four megaspores. One of the megaspores enclosed within the megasporangium (nucleus) develops into a multicellular female gametophyte that bears two or more archegonia or female sex organs. The multicellular female gametophytes are also retained within megasporangium.

Three groups of plant that bear archegonia are
1. Bryophyta,
2. Pteridophyta and
3. Gymnosperm.

Question 5.
Write a note on economic importance of algae and gymnosperms.
Solution:

Question 6.
Both gymnosperms and angiosperms bear seeds, then why are they classified separately?
Solution:
Gymnosperms are ‘naked seeded’ plants because their seeds are not enclosed in fruit wall whereas angiosperm are ‘enclosed seeds’ as seeds (ovules) are found enclosed in the ovary wall.

Question 7.
What is heterospory? Briefly comment on its significance. Give two examples.
Solution:

Question 8.
Explain briefly
(i) Protonema
(ii) Antheridium
(iii) Archegonium
(iv) Diplontic
(v) Sporophyll
(vi) Isogamy
Solution:
(i) Protonema: The predominant stage of moss gametophyte which directly develops from spore is known as protonema.
(ii) Antheridium: The male sex organ in bryophytes, pteridophytes and gymnosperms is called antheridium. It bears male gamete.
(iii) Archegonium : It is the female sex organ found in bryophytes, pteridophytes and gymnosperms. It bears a female gamete.
(iv) Diplontic: In the life cycle of plants when their diploid stage is dominant for long time then this is called diplontic.
(v) Sporophyll: The sporophyte bears sporangia that are subtended by leaf-like appendages called sporophylls.
(vi) Isogamy: When the gametes involved in sexual reproduction are morphologically similar then this is called isogamy. These gametes are physiologically different.

Differences between red algae and brown algae are as follows 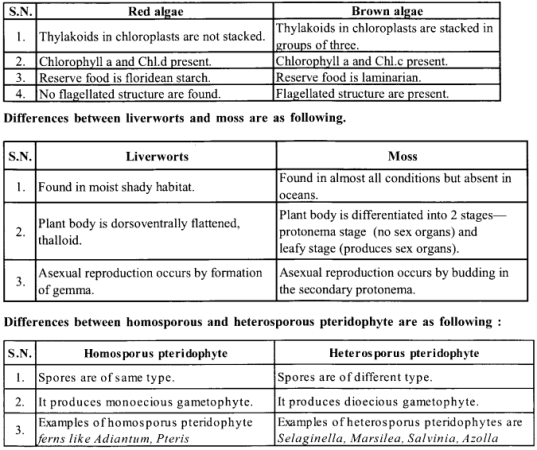 Question 10.
How would you distinguish monocots from dicots?
Solution:
Dicots are characterized by having two cotyledons in their seeds while the monocotyledons have only one.

Question 12.
Describe the important characteristics of gymnosperms.
Solution:
The seed forming vascular plants which produce seeds but no fruits are called gymnosperms. General characters of gymnosperm are as follows:

Question 4.
Name the organ that fixes the Plant body of Riccia to the soil.
Solution:
Hepaticopsida.

Question 7.
Which group of plants produces seed but not fruits?
Solution:
Gymnosperm.

Question 8.
Which part of ovule is haploid in gymnosperm?
Solution:
Endosperm

Question 9.
What is name of megasporophyll bearing ovules of angiosperm?
Solution:
Carpel.

Question 10.
Why do gymnosperms fail to produce fruits?
Solution:
Fruits are formed from ovaries. Since the gymnosperm ovules are not enclosed inside the ovaries, they do not produce fruit.

Question 12.
Which algae is known as Rolling alga?
Solution:
Volvox

Question 13.
Which are the specialized structures in selaginella which bear adventitious roots?
Solution:
Rhizophores

Question 14.
What is the number of cells and nuclei present in the embryo sac of angiosperm?
Solution:
7 cells and 8 nuclei

Question 15.
Which plant is known as a living fossil?
Solution:
Cycas

Question 1.
What are the salient features of pteridophyte?
Solution:
Pteridophytes are vascular cryptogams i.e., plants of this group possess vascular tissue (i. e., xylem, and phloem) for the conduction of water and minerals and for the translocation of foods. They are flowerless and seedless plants.
The general characters of pteridophytes are as following.
I. Primary root is short-lived. It is replaced by adventitious roots.
II. All vegetative parts possess vascular tissues. A cambium is altogether absent. In xylem trachea are absent and in phloem companion cells are absent.
III. Pteridophytes show origin and evolution of stele {i.e., vascular tissue, pericycle, and if present the pith).
IV. Pteridophytes are characterized by having only tracheids in their xylem and only sieve tube in their phloem.
V. The main plant body is the sporophyte (diploid), usually differentiated into true roots, true stems, and true leaves. A stem is usually an underground rhizome or an erect trunk as in tree ferns. Leaves are large (megaphyllous) and variously shaped. 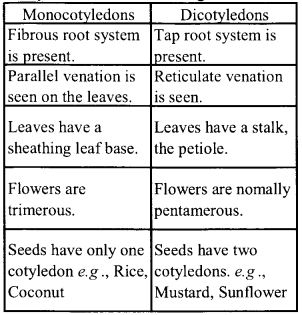 Question 7.
What are the features of Gemmae found in bryophytes?
Solution:
Gemmae are the means of asexual reproduction found in many bryophytes (ex-Liverworts). They are one to many-celled, specially produced clonal plant fragments. They are green multicellular, asexual buds which develop in small receptacles called “gemma cups” located on the thalli. Gemmae become detached from the parent body and germinate to form a new individual

Question 8.
What is the basis of the classification of the phylogenetic system?
Solution:
It indicates evolutionary as well as the genetic relationship among organism, it is based on the fossil record, biochemical, anatomical, morphological, embryological, physiological, genetics, Karyotype, and other studies.

Question 9.
What are the main features of Anthocerotopsida?
Solution:
These are also known as hornworts because typical horn-like appearances are present of their sporophyte. These contain thalloid gametophyte, distinctly dorsiventral, rhizoids are present, Thalloid do not possess air chambers and scales. Each cell of thallus has a single large chloroplast with a pyrenoid.

Question 2.
Write short notes on the following :
(a) Peristomial teeth of moss
(b) Protonema of moss
(c) Archegonia of moss
Solution:
(a) Peristomal teeth are located just below the operculum. It helps in the dispersal of spores by the hygroscopic movement of its outer ring while the inner ring does not show the hygroscopic movements.
(b) Each spore produces a filamentous juvenile stage called protonema. Protonema has two types of branches, subterranean nongreen rhizoidal, and green Mediterranean branches. Buds develop on green prostrate branches which grow to form new moss plants.
(c) Female reproductive organ of moss is called archegonium. 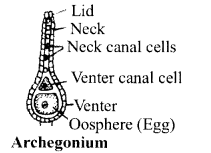 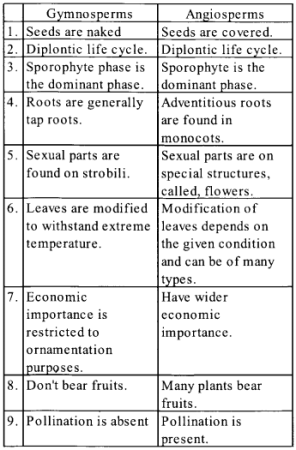 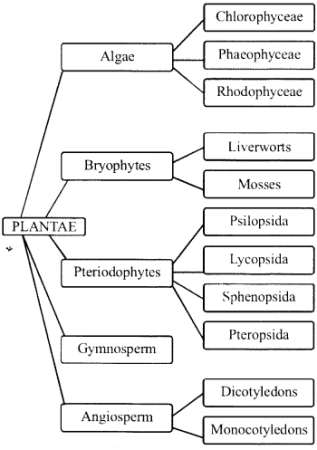