Question 4.
Which of the following is correct
(a) Cells of living organisms have a nucleus.
(b) Both animals and plant cells have a well defined cell wall.
(c) In prokaryotes, there are no membrane bound organelles.
(d) Cells are formed de novo from abiotic materials
Solution:
(c) In prokaryotes, there are no membrane-bound organelles.

Question 5.
What are mesosomes in a prokaryotic cells? Mention the function that it performs.
Solution:
A special membranous structure is a mesosome that is formed by the extensions of the plasma membrane into the cell. These extensions are in the form of vesicles, tubules, and lamellae. They help in cell wall formation, DNA replication, and distribution to daughter cells. They also help in respiration, in the secretion process increase plasma membrane surface and enzymatic content.

A few ions or molecules are transported across the membrane against their concentration gradient i.e. from lower to the higher concentration. Such transport is an energy-dependent process, in which ATP is utilized and is called active transport. e,g., Na’/K* Pump. 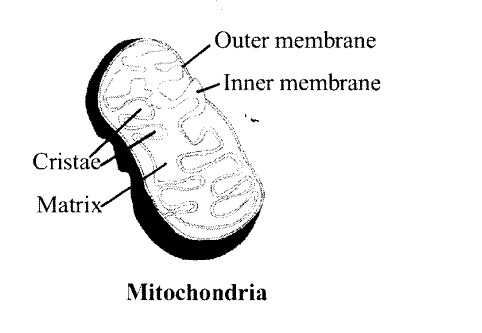 (b) Chloroplast: Chloroplast is responsible for converting light energy into chemical energy. Chloroplast contains stacked thylakoid in its matrix.

Functions of mitochondria: The double membrane mitochondria are actively associated with aerobic respiration and the release of energy for cellular activity. The biological oxidation of the fats and carbohydrate release much amount of energy which is utilised by mitochondria for ATP synthesis. The required energy is released from ATP molecules for various cell processes in cells so they are termed as “the powerhouse of the cell”
Functions of chloroplast :
(i) Their main function of the chloroplast is to trap the sun’s energy and to convert it into chemical energy of food by photosynthesis.
(ii) Storage of starch.
(iii) Chloroplast in fruits and flowers changes into chromoplasts.

Question 8.
What are the characteristics of prokaryotic cells?
Solution:
The prokaryotic cells are represented by bacteria, blue-green algae, mycoplasma, and PPLO (Pleuro Pneumonia-like organisms). They are generally smaller and multiply more rapidly than the eukaryotic cells. They may vary greatly in shape and size. The four basic shapes of bacteria are bacillus (rod-like), coccus (spherical), vibrio (comma-shaped), and spirillum (spiral).

The organization of the prokaryotic cell is fundamentally similar even though prokaryotes exhibit a wide variety of shapes and functions. All prokaryotes have a cell wall surrounding the cell membrane. The fluid matrix filling the cell is the cytoplasm. There is no well-defined nucleus. The genetic material is basically naked being not enveloped by a nuclear membrane.

In addition to the genomic DNA (the single chromosome/ DNA circle), many bacteria have small DNA circles outside the genomic DNA. These smaller DNA circles are called plasmids, The plasmid DNA confers certain unique phenotypic to antibiotics. Prokaryotes have something unique in the form of inclusions.

Question 10.
Cell is the basic unit of life. Discuss in brief.
Solution:
Cell: The Basic Unit of life: All living organisms are composed of small, tiny structures or compartments called cells. These cells are called the ‘building blocks’ of life.

Question 11.
What are nuclear pores? State their function.
Solution:
At a number of places, the nuclear envelope is intercepted by minute pores which are called nuclear pores. These are formed by the fusion of two nuclear membranes. These nuclear pores are the passages through which the movement of RNA and protein molecules takes place in both directions between the nucleus and the cytoplasm.

Question 12.
Both lysosomes and vacuoles are * endomembrane structures, yet they differ in
terms of their functions. Comment.
Solution:
Lysosomes are filled with hydrolytic enzymes that are capable of digesting carbohydrates, proteins, lipids and nucleic acids whereas vacuoles contain water, sap, excretory product and other materials not useful for cell.

Question 13.
Describe the structure of the following with the help of labelled diagrams.
(i) Nucleus
(ii) Centrosome
Solution: 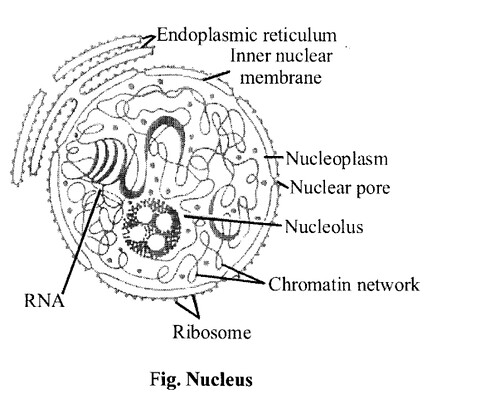 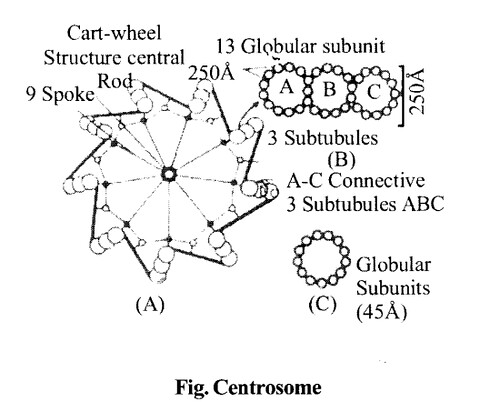 The types of proteins present and associated with DNA are histone and non-histone proteins.

Chromosomes are thread-like structures. They become visible (under light microscope) during cell division.

In higher organisms, the well-developed nucleus contains a definite number of chromosomes of definite size and shape. 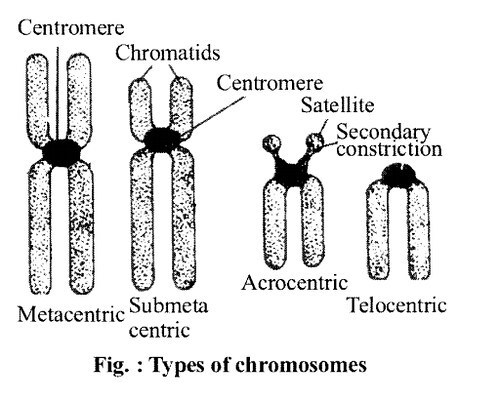 Question 2.
Give the location of 70S ribosomes.
Solution:
Prokaryotic cells, plastids, and mitochondria

Question 4.
Who proposed the cell theory?
Solution:
Schleiden and Schwann.

Question 6.
Name the organelle responsible for protein synthesis in a cell.
Solution:
Ribosome

Question 7.
Give the full form of SER and RER.
Solution:

Question 8.
Name the membrane which surrounds the vacuole in the cell.
Solution:
Tonoplast

Question 11.
What is plasmodesmata? What is its function?
Solution:
Plasmodesmata: Adjoining the cells and the linking gap of cytoplasmic protoplasmic presence is called Plasmodesmata. It links the neighbouring cells together.

Question 3.
What is peculiar about mitochondrial DNA?
Solution:
Mitochondrial DNA is circular double-stranded and not associated with histone proteins. 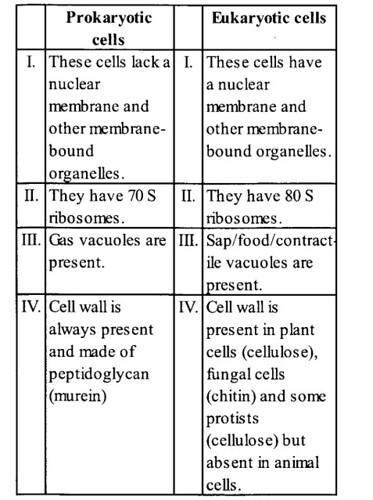 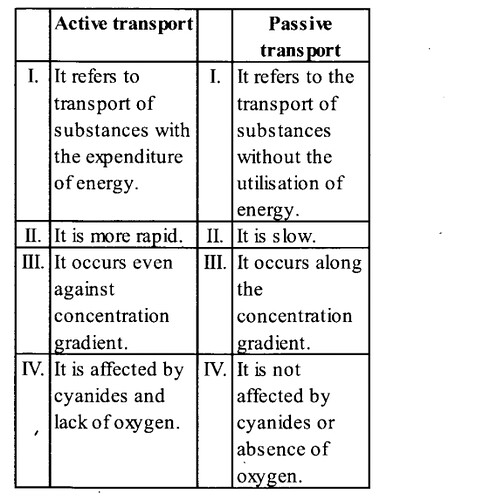 Question 9.
What is the function of
(1) Nuclear Pores
(2) Slimy Capsule in Bacteria
(3) Golgi Bodies:
(4) Centrosome with Centrioles
Solution:
(1) Nuclear Pores: There is exchange of RNA and proteins through the nuclear pores
(2) Slimy Capsule in Bacteria : A slimy capsule is the outer covering of cell wall of bacteria and is an additional protection for the bacteria.
(3) Golgi Bodies :
(i) It takes part in packaging materials delivered either to the intra-cellular targets or secteted outside the cell.
(ii) It is also a important site of formation of glycoproteins and glycolipids.
(4) Centrosome with Centrioles
(i) Centrioles help in organising the spindle fibres and astral rays during cell division.
(ii) It also provides basal bodies which give rise to cilia and flagella.

Question 3.
Give an ultrastructure of mitochondria.
Solution:

Question 4.
Describe the fluid mosaic model of membrane.
Solution:
The characteristic features of fluid mosaic model
• This model was proposed by Singer and Nicholson.
• According to this model, there is a central bilipid layer (of phospholipids) with their polar head group toward the outside and the non-polar tails pointing inwards.
• Some proteins which are embedded in the lipid layer are called integral proteins and they cannot be separated from the membrane easily.
• Some large globular integral proteins which project beyond the lipid layer on both the sides are believed to have channels through which water soluble materials can pass across.
• Those proteins which are superficially attached are called peripheral (extrinsic) proteins and they can be easily removed.
• Some membrane lipids and integral proteins remain bound to oligosaccharides; such oligosaccharides project into the extracellular fluid and they influence the manner in which cells interact with the other cell.
• There are also certain specific proteins called membrane receptors, which mediate the flow of materials and information into the cell.

Question 5.
What are plastids? How are they classified on the basis of the type of pigments? Name them and their pigments and mention their functions.
Solution:
Plastids are double-membrane bound organelles
of different shapes, that are found only in plant
cells and contain pigments and storage products.
They are of three types :
(i) Leucoplasts
These are the oval, spherical, rod-like or filamentous colourless plastids which are found in storage organs. Their main function is to store reserve materials like starch (amyloplasts), proteins (aleuroplasts) and fats (elaioplasts).
(ii) Chromoplasts
• These are coloured plastids containing mainly the yellow, red and orange pigments (carotene and xanthophyll).
• These are found in petals of flowers and skin of fruits.
• They attracts agents for pollination and dispersal of fruits/seeds.
(iii) Chloroplasts
• These are the green plastids containing mainly chlorophylls and very little carotene and xanthophyll.
• Their main function is photosynthesis and the formation of starch.