You can also practice NCERT Solutions for Class 6 History Chapter 4 Questions and Answers on LearnInsta.com.

Question 1.
Where is Harappa situated in present-day?
Answer:
At Present, Harappa is situated in Pakistan.

Question 2.
When was the first time railway lines was laid down in Punjab?
Answer:
About 150 years ago.

Question 6.
Where were Harappan cities found, gives the names of places.
Answer:
Harappan cities were found in the Punjab and Sind in Pakistan, Gujarat, Rajasthan, Haryana and in Punjab (India).

Question 8.
What was the west part called?
Answer:
West part was known as “citadel”. This part was smaller but higher.

Question 9.
How was eastern part described?
Answer:
It was larger but lower.

Question 12.
In which city was the special tank (Great Bath) found?
Answer:
A special tank which is called the Great Bath was found in Mohenjodaro.

Question 14.
Where were sacrifices performed?
Answer:
In Lothal and Kalibangan sacrifices may have been performed.

Question 15.
Where did we find elaborated storehouses?
Answer:
Some cities like Mohenjodaro, Harappa and Lothal had elaborate storehouses.

Question 16.
Who planned the Harappan cities?
Answer:
It was likely that rulers planned the city.

Question 19.
Who was ‘scribes’?
Answer:
The people who knew the writing and helped prepare the seals and likely wrote on other materials were known as ‘scribes’.

Question 21.
What was the use of gold and silver?
Answer:
Both were considered as precious metals and used to make ornaments and vessels.

Question 23.
How were the Harappan pots?
Answer:
The pots were baked earthen with beautiful black designs.

Question 24.
How were the stone weights made of ?
Answer:
Stone weights were made of chert-a kind of stone.

Question 25.
What do you understand about ‘carnelian’?
Answer:
Carnelian was a beautiful stone and was used to make beads.

Question 27.
What were the uses of Faience?
Answer:
Faience was used to make beads, bangles, earrings and small vessels etc.

Question 28.
What was the colour of faience?
Answer:
It was blue or sea green.

Question 29.
How was Faience made?
Answer:
Gum was used to shape sand or powdered quartz into an object.

Question 30.
What are raw materials?
Answer:
Raw materials are substances that are either found naturally or produced by farmers or herders.

Question 33.
Where did the Harappans get gold from?
Answer:
Present-day Karnataka.

Question 2.
How were houses planned in cities?
Answer:
Generally, houses were either one or two storeys high with rooms built around courtyard. Most houses had separate bathing area and some had wells to supply water and had covered drains.

Question 5.
Where was Cotton grown? What were the evidences found by the archaeologists?
Answer:
Cotton was grown probably at Mehrgarh. Actual pieces of cloth were found attached to the lid of a silver vase and some copper objects at Mohenjodaro.

Question 6.
What was used in making the seals and what was found special in seals?
Answer:
The Harappans made seals on stone. These were generally rectangular and had usually an animal carved on them with a script in form of signs which are still not known exactly what they mean.

Question 7.
Who were called specialist?
Answer:
A person who is trained to do only one work such as cutting stone or polishing beads or carving seals.

Question 8.
Make a list of raw materials produced by the farmers.
Answer:
Farmers in our country are great producers of edible items:

Question 9.
Do you know from where gold, bronze, copper and precious stones were brought by the Harappans?
Answer:
Yes, the Harappans probably got copper from Rajasthan, bronze may have been brought from Afghanistan and Iran, Gold from Karnataka and precious stones from Gujarat, Iran and Afghanistan. (All places are stated as per present location)

Question 10.
Write a short note on Lothal.
Answer:
Lothal was a city on the banks of the tributary of the Sabarmati in Gujarat. It was a centre for making stone, shell and metal objects. A storehouse and fire altars were also found in the city.

Question 1.
What was special about the Harappan cities?
Answer:
Many of these cities were divided into two or more parts. Number one was the west part which was smaller but higher. Archaeologists described this as the ‘citadel’. Number two was the east part which was larger but lower. Around each part, baked bricks were used. Bricks were so well-made that they have lasted for thousands of years. The bricks were laid in an interlocking pattern that made the walls strong.

Question 2.
What do you know about Mohenjodaro?
Answer:
Mohenjodaro was a city which comes under the Harappan cities. In Mohenjodaro, there was a very special tank which is called the Great Bath. This Great Bath was made up of bricks and bricks were coated with plaster and tank was made water-tight with a layer of natural tar. Stairs were used for bathing. Water in the tank was probably brought in from well and water was drained out after use. Perhaps, important people took a dip in this tank on special occasions.

Question 4.
How were the beads made?
Answer:
Beads were made of carnelian, a beautiful red stone. The stone was cut, shaped and polished and finally a hole was bored through the centre so that string could be passed through it. Thus, garlands of beads were made and used.

Question 5.
How were the goods carried from one place to another?
Answer:
In the Harappan cities, a cart toy has been found which is just like the bullock cart used in present time. There were two wheels in it which were connected to each other with an axle and sides of base are supported by sticks. Thus, archaeologists considered that this cart would have been used for carrying the goods.

Question 6.
How were plants grown in the Harappan cities?
Answer:
The earth was dug for turning the soil and planting the seeds by the use of plough. There was not heavy rainfall and thus water was stored and used for irrigation. The Harappans grew wheat, barley, pulses, peas, rice, sesame, linseed and mustard.

But none of these reasons can explain the end of all the cities. Flooding or a river drying up would have had an effect in only some areas.

Question 8.
Write a short note on Pyramids found in Egypt.
Answer:
Around 5000 years ago, kings ruled over Egypt. They had armies and these were used to collect precious metals and stones. They also built huge tombs, known as pyramids. When kings died, the bodies were preserved and buried in these pyramids. These carefully preserved bodies are known as ‘mummies’. A large number of objects were also buried with them.

Question 1.
Look at the picture given below. Please state its use in earlier time. Are we presently using something like this?

Answer:
In the picture, a plough has been shown, which was found in the Harappan cities. This is a toy, but archaeologists believe that this was used in digging and turning the soil for the purpose of planting of seeds. Presently, our farmers in villages also use plough for the same purpose. It appears that present-day ploughs have been developed from the Harappan plough. 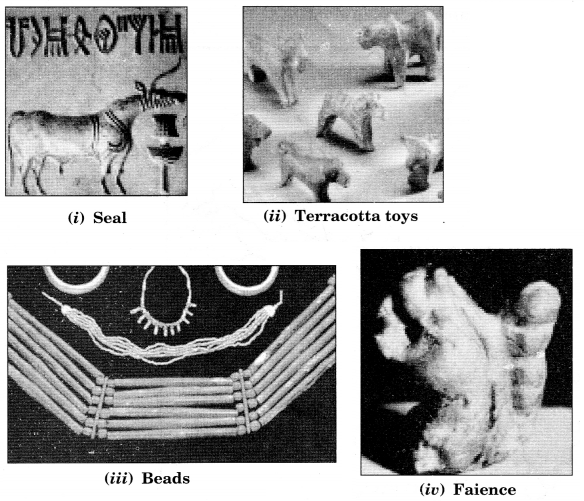 Answer:
Picture (i):
The object is a seal and found in the Harappan cities. This seal contains script and picture of animal. Script is still unreadable. This seal was used to stamp bags or packets containing goods that were sent from one place to another. Mouth of the bag was tied and a layer of wet clay was applied on knot and seal was pressed on it. Sealing on any object assured about safety of goods. Today also we seal the goods, articles, parcels etc.

Picture (ii):
Shown objects in the picture are terracotta toys and found in the Harappan cities. These were made by baking the clay after making the designs on the clay. All terracotta toys are animals of that time which refer that the Harappan people were closely concerned with animals. Perhaps the Harappan children played with these toys. In present day, we also find Terracotta things. Many type of decorative vessels, articles, animals, birds etc., are available in the market.

Picture (iii):
Shown objects in the picture are ornaments such as garland, earring etc., made by beads and these were found in the Harappan cities. Many of the beads were made of carnelian, a beautiful red stone. The stone was cut, shaped, polished and finally a hole was bored through the centre so that a string could be passed through it. These type of the ornaments are available in the present market too and these are very much liked by the women particularly outsiders.

Picture (iv):
An artificial object faience has been shown in the picture. Faience was used to make beads, bangles, earrings and tiny vessels.

Question 1.
Show the places of the Harappan Civilization on a Map of India
Answer: