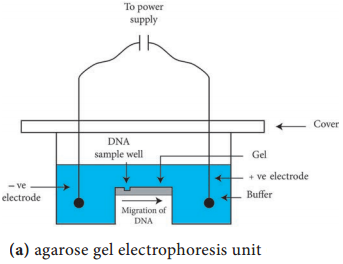 As the DNA is negatively charged, DNA fragments move through the gel towards the positive electrode. The rate of migration of DNA is dependent on the size and shape. In general, smaller linear fragments move faster than the larger ones.

Hence, gel electrophoresis can be conveniently used for the separation of a mixture of DNA fragments, based on their size. The bands of the DNA can be detected by soaking the gel in ethidium bromide solution (Ethidium bromide can also be added to molten agarose prior to setting the gel).

When activated by ultraviolet radiation, DNA base pairs in association with ethidium bromide, emit orange fluorescence. And in this way the DNA fragments separated in agarose electrophoresis can be identified (Figure 12.30b). 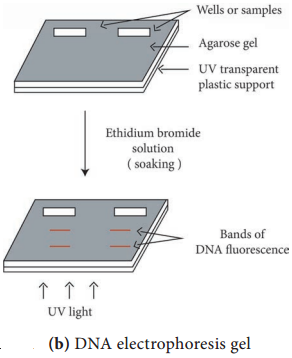 PAGE is composed of chains of acryl amide monomers crosslinked with methylene bisacryalmide units. The pore size of the gel is dependent on the total concentration of monomers and the cross links. PAGE is used for the separation of single stranded DNA molecules that differ in length by just one nucleotide.

Agarose gels cannot be used for this purpose. This is because polyacrylamide gels have smaller pore sizes than agarose gels and allow precise separation of DNA molecule from 10-1500 bp.

Mullis received the 1993 Nobel Prize for Chemistry for his invention. PCR is a cell free amplification technique. Figure 12.31 outlines how PCR technique works. To amplify (make large quantities) a particular DNA sequence by PCR a reaction mixture (often 100μl or less in volume) containing the following are required. 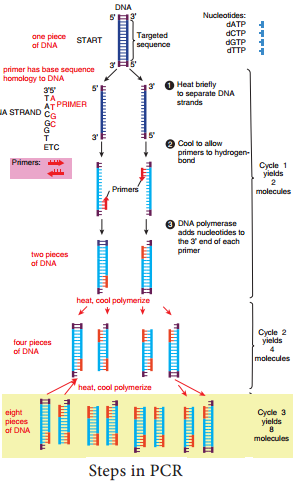 The target DNA containing the sequence to be amplified is heat denatured to separate its complementary strands at temperature 94 °C-95 °C.

The temperature is lowered to 37 °C-55 °C so that the primers can hydrogen bond or anneal to the DNA on both sides of the target sequence. Because the primes are present in excess the targeted DNA strands normally anneal to the primers rather than to each other.

The third cycle yields 16 products. Theoretically, 20 cycles will Figure 12.32: Three steps PCR cycle The PCR technique has now been automated and is carried out by a specially designed machine (Figure 12.33) PCR machines are now fully automated and microprocessor controlled. 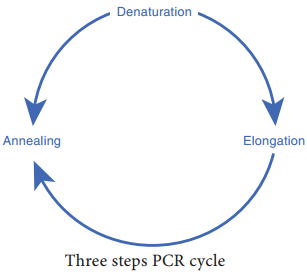 They can process up to 96 samples at a time. PCR machines can carry out 25 cycles and amplify DNA 105 times in as little as 57 minutes.

The PCR has many applications in research and in commercial arena, including generating specific DNA segments for cloning or sequencing, amplifying DNA to detect specific genetic defects, and amplifying DNA for fingerprinting in crime scene investigation.

PCR technology is improving continually. Various forms of PCR are available. RNA too can be efficiently used in PCR procedures. Cellular RNAs and RNA viruses may be studied even when the RNA is present in very small amounts (as few as 100 copies can be transcribed and amplified). Quantitative PCR is quite valuable in virology and gene impression studies.

PCR is modified as per the specific demands of the situation. Thus there are many variations in the original PCR Examples nested PCR, inverse PCR, reverse transcription PCR, time quantitative PCR, RAPD, RFLP, AFLP. 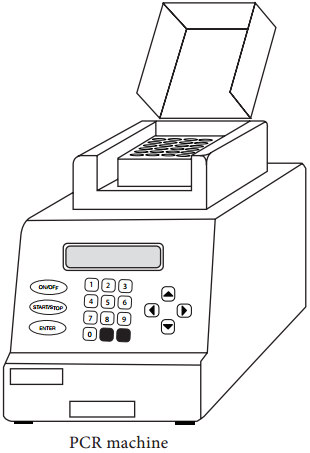