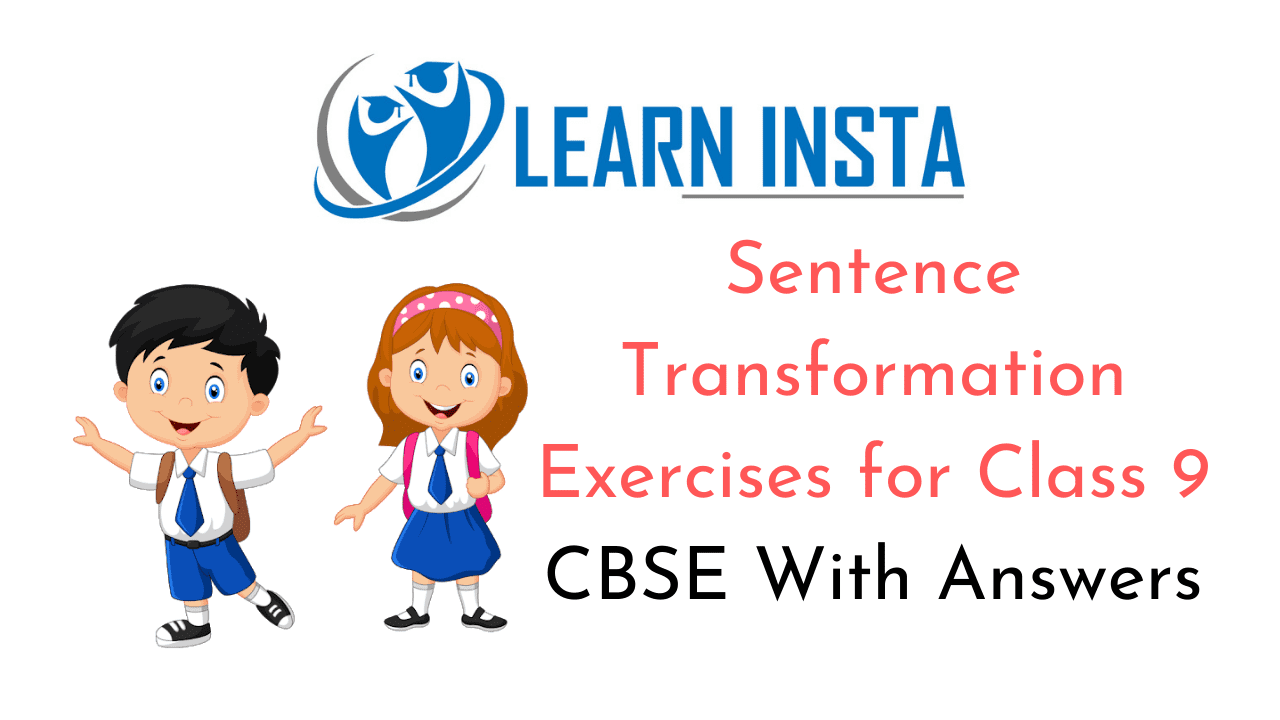 Transformation of sentences means to change the form of a sentence without changing its meaning. A simple sentence can be changed into a complex or a compound sentence and vice versa. Similarly, an interchange of affirmative, negative, and interrogative sentences can be done; without changing their meaning. Given below are some of the ways to transform a sentence.

This grammar section explains English Grammar in a clear and simple way. There are example sentences to show how the language is used. You can also visit the most accurate and elaborate NCERT Solutions for Class 9 English. Every question of the textbook has been answered here.

1. Remove the adverb ‘Too’
We can change the form of a sentence containing the adverb ‘too’ by replacing it by so that like this: that + subject + can not.

2. By changing the degree of comparison.
(a) Positive to comparative.

(b) Comparative to positive.

3. Use of a negative and an opposite word or double negatives.

4. Interchange of Interrogative and Assertive.

Note: Only those sentences where the interrogative form has been used for the sake of emphasis can be changed into assertive forms.

5. Interchange of Exclamatory and Assertive.

Use of ‘very’ in place of the words showing exclamation.

Note: Narration and change of voice also come under the transformation of sentences.

Question 1.
With the help of the hints given below, write out the recipe required to make shrikhand. Read the given recipe and then write out the instruction filling in the gaps choosing the correct option.

Question 4.
Given below is the method for mending the puncture in a cycle tube. Do not copy the complete .sentence. Write your answers against the correct blank numbers in your notebooks.

Read the following dialogues and then change the narration from direct to indirect speech.

Question 1.
Prerna: Are you going for the picnic?
Ram: No, I can’t because my father is unwell.
Prerna: I will pray to God for his speedy recovery.

Question 3.
Mother: Why are you looking so pale. Are you all alright?
Daughter: I have not eaten anything since morning as I lost my bag.
Mother: You should have told me this earlier.

Rewrite the following short paragraphs changing the voice from active to passive and from passive to active.

Type 3
Do As Directed

Question 1.
This, box is too heavy to lift. (Use so… that)
Answer:
This box is so heavy that it cannot be lifted.

Question 6.
Ravi is as intelligent as Sohan. (Use comparative degree)
Answer:
Sohan is not more intelligent than Ravi.

Question 7.
She is very sick. She cannot walk. (Combine using ‘too… to’)
Answer:
She is too sick to walk.

Question 12.
She speaks (Complete with an adverb clause)
Answer:
She speaks as if she owns the place.

Question 16.
The tailor is stitching a dress. (Begin with, ‘A dress’)
Answer:
A dress is being stitched by the tailor.

Question 17.
She cannot speak. She cannot hear. (Combine using ‘neither… nor’)
Answer:
She can neither speak nor hear.