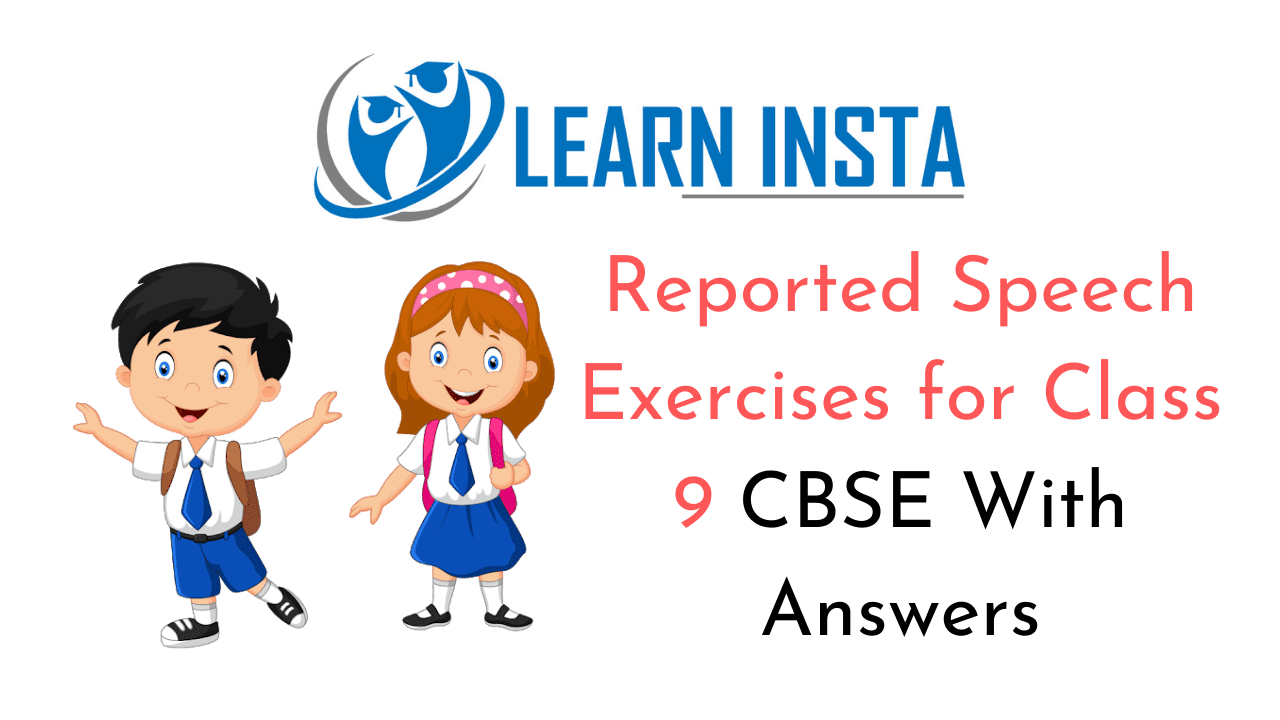 Reporting the words of the speaker in your own words is called reported speech.

This grammar section explains English Grammar in a clear and simple way. There are example sentences to show how the language is used. You can also visit the most accurate and elaborate NCERT Solutions for Class 9 English. Every question of the textbook has been answered here.

Type 1. Statements
Steps to be kept in mind for changing direct speech into indirect (statements).

Step 2. Inverted commas are dropped and the conjunction ‘that’ is used.

Step 3. Change of personal pronouns and possessives.
Changing I, my, me, mine; we, our, us, ours (First-person). 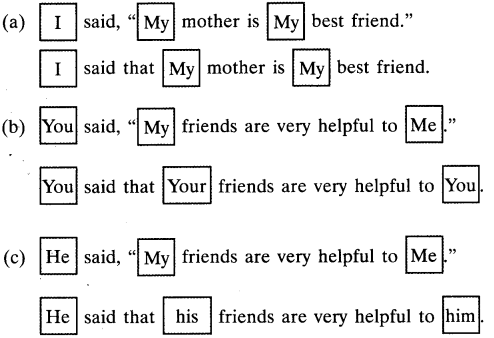 If the reporting verb is in the past tense, the tense of the reported speech gets changed into the corresponding past tense as under. 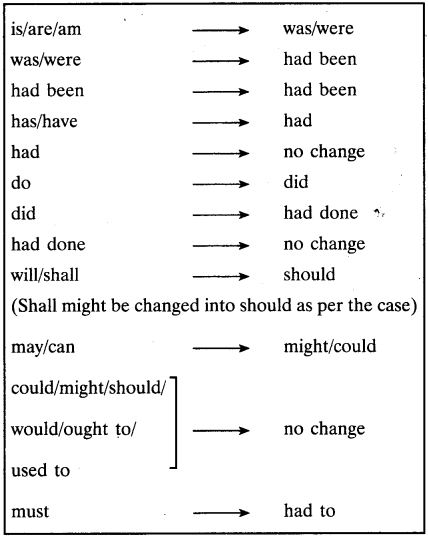 Note. There are two situations where even if the reporting verb is in the past tense, the verb of the reported speech remains unchanged.

1. If the reported speech expresses a universal truth or a habitual fact.

2. The reported speech describes a situation which still exists when the speech is reported.

A. If the reported speech is a question, the following changes are made.
The reporting verb is changed into ‘asked/required’.

B. The inverted commas are removed and If/whether is used. The question mark is removed and a full stop is placed. No conjunction is used while reporting wh-questions. The direct form is changed to indirect question form. Place the subject before verb in the reported question.

If reporting commands and requests, the indirect speech is introduced by some verbs expressing commands or requests and the imperative mood is changed into the infinitive.

Step 2. The verb of the reported speech is changed into an infinitive and inverted commas are removed.

Type 4. Exclamations and wishes
Step 1. The reporting verb said is changed to exclaimed, wished, prayed, etc.
Step 2. The exclamatory form is changed into the statement form and the mark of exclamation is replaced by a full stop.
Step 3. The reporting verb is joined with reported speech with ‘that’.
Step 4. All interjections are omitted and suitable adverbs or other expressive words are used.

Change the following from direct to indirect speech.

Question 15.
He said, “Alas! I perish by the people I made.
Answer:
He confessed with regret that he was perished by the people he had made.

Question 16.
He said, “Alas! what a fool I am.
Answer:
He exclaimed with grief/regret that he was a great fool.

Change the narration of the following sentences from direct to indirect.

Question 18.
Sita said to Praveen, “I will return your money tomorrow.”
Answer:
Sita told Praveen that she would return his money the next day.

Read the following dialogues and report in indirect narration.

Question 27.
Mother : Where were you?
Daughter ‘ : I was on the terrace playing.
Mother : Please do not go without prior permission.
Daughter : This was the first time ever that I went on the terrace.
Mother : Remember, do not go there alone.
Answer:
Mother asked her daughter where she had been. The daughter replied that she had been on the terrace playing. The mother then requested her not to go without prior permission. The daughter apologised saying that that had been the first time ever that she had gone on the terrace. The mother warned her saying not to go there alone.

Question 28.
Master : How are you feeling now?
Worker : I am feeling batter but I am not completely fine.
Master : Do you need more rest?
Worker : It is okey. I will report tomorrow.
Answer:
Master asked his worker how was he feeling then. The worker replied that he was feeling better but was not completely fine. The master further asked him if he needed more rest. The worker replied that that was okey and that he would report the next day.

Question 30.
Teacher : I want all students to quietly do the work.
Students : Will you allow us to go for games after this?
Teacher : First, all of you have to finish your work.
Students : We promise that we will finish our work first.
Answer:
Teacher instructed the students that she wanted them to quietly do the work. The students asked if she would allow them to go for games after that. The teacher insisted that first, all of them had to finish their work. The students then promised her that they would finish their work first.

Question 31.
Father : Why did you go to the market today?
Son : I had to buy some material to do my project.
Father : Who gave you the project?
Son : My science teacher gave the project.
Father : Do you need any money for it?
Ans.
Father asked his son why had he gone to the market that day. Son replied that he had to buy some material to do his project. Father then asked him who had given the project. Son replied that his science teacher had given the project. Father then asked his son if he needed any money for that.

Question 32.
Customer : You have a variety of frozen stuff.
Shopkeeper : You can buy as much as you like.
Customer : Why don’t you keep fresh vegetables?
Shopkeeper : Things have become very expensive these days.
Customer : You should start keeping good stuff otherwise I shall stop buying from you.
Answer:
Customer told the shopkeeper that he had a variety of frozen stuff. Shopkeeper replied that he could buy as much as he liked. The customer then asked the shopkeeper why he didn’t keep fresh vegetables. The shopkeeper replied that things had become very expensive those days. The customer warned him that he should start keeping good stuff otherwise, he (customer) would stop buying from him.

Question 33.
Doctor : What did you eat yesterday?
Patient : I could hardly eat anything as I was having stomachache.
Doctor : Are you still having it?
Patient : At this moment, I am having fever and feeling weak.
Doctor : You most take rest.
Answer:
Doctor asked the patient what had he eaten the previous day. The patient repled that he could hardly eat anything as he had been having stomachache. Doctor then asked him if he was still having that. The patient replied that at that moment, he was having fever and was feeling weak. The doctor advised him to take rest.

Question 34.
Employee : Please grant me two weeks’ leave.
Boss : Why do you need it for such a long time?
Employee : I have to visit my ailing mother.
Boss : Okey, I shall grant you leave but do not overstay your leave.
Answer:
The employee requested his boss to grant him two weeks’ leave. The boss asked him why he needed leave for such a long time. The employee replied that he had to visit his ailing mother. The boss agreed to grant him leave but instructed him not to overstay his leave.

Question 36.
Hameed : Did you visit the national museum?
Shano : How can I as there is nobody to accompany me?
Hameed : Do not worry.
Shano : I am not worrying but I am the only one who has not seen it.
Answer:
Hameed asked Shano if she had visited the national museum. Shano replied how she could as there was nobody to accompany her. Hameed told her not to worry. Shano replied taht she was not worrying but she was the only one who had not seen that.

Read the following dialogues and complete the report appropriately.