Question 1.
An object has moved through a distance. Can it have zero displacement ? If yes, support your answer with an example. (CBSE 2015)
Answer:
Yes, The displacement of the object can be zero. Let a boy completes one round of a circular track in 5 minutes. The distance travelled by the boy = circumference of the circular track. However, displacement of the boy is zero because his initial and final positions are same. 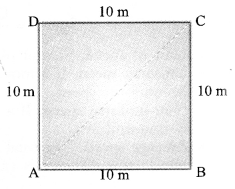 Question 4.
Under what conditions) is the magnitude of the average velocity of an object equal to its average speed ? (CBSE 2012, 2013)
Answer:
When an object moves in one direction along a straight line.

Question 6.
What does the path of an object look like when it is in uniform motion ? (CBSE 2012)
Answer:
Straight path.

Question 8.
When will you say a body is in

Question 10.
A train starting from a railway station and moving with a uniform acceleration attains a speed of 40 km h-1 n 10 minutes. Find its acceleration.
Answer:

Question 11.
What is the nature of the distance-time graphs for uniform and non-uniform motion of an object ?
(CBSE 2012)
Answer:

Question 16.
A train is travelling at a speed of 90 km h-1. Brakes are applied so as to produce a uniform acceleration of – 0.5 m s-2 . Find how far the train will go before it is brought to rest ?
Answer:

Question 18.
A racing car has a uniform acceleration of 4 m s-2. What distance will it cover in 10 s after start ?
Answer:

Question 19.
A stone is thrown in a vertically upward direction with a velocity of 5 m s-1 If the acceleration of the stone during its motion is 10 m s-2 in the downward direction, what will be the height attained by the stone and how much time will it take to reach there ?
Answer:

Question 1.
An athlete completes one round of a circular track of diameter 200 m in 40 s. What will be the distance covered and the displacement at the end of 2 minutes and 20 s ?
Answer:

(ii) After every 40 s, athlete reaches his starting point, so after 40 s, his displacement is zero. It means, the athlete completes the circular track 3 times in 120 s and in the next 20 s, he is just opposite to his starting point. Therefore, the magnitude of the displacement of the athlete at the end of the 140 s (or 2 minutes 20 s) = Diameter of the circular track = 200 m. 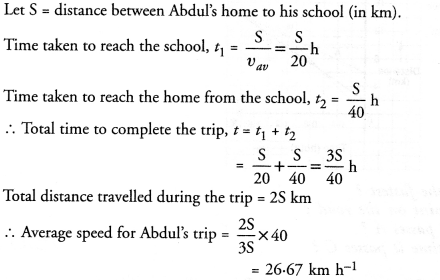 Question 5.
A driver of a car travelling at 52 km h-1 applies the brakes and accelerates uniformly in the opposite direction. The car stops in 5 s. Another driver going at 3 km h-1 in another car applies his breaks slowly and stops in 10 s. On the same graph paper plot the speed versus time graphs for the two cars. Which of the two cars travelled farther after the brakes were applied ?
Answer: 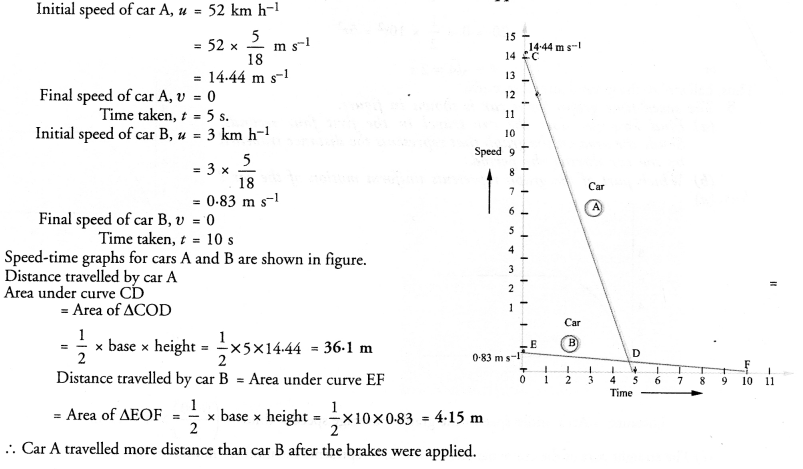 Question 6.
Figure shows the distance-time graph of three objects A, B and C. Study the graph and answer the following questions : 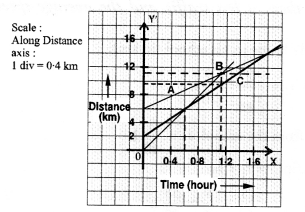 Question 8.
The speed time graph for a car as shown in figure 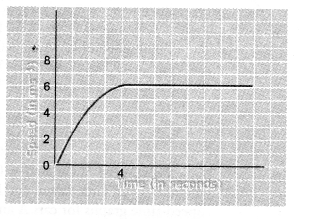 (a) Find how far does the car travel in the firdt four seconds.
Shade the area on the graph that represents the distance travelled by the car during the period.
(b) Which part of the graph represents uniform motion of the car?
Answer:
(a) 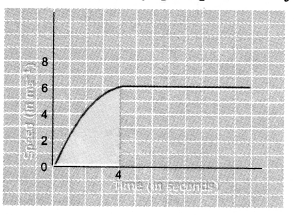 (b) The straight part of the curve parallel to time axis represents the uniform motion of the car.

Question 10.
An artificial satellite is moving in a circular orbit of radius 42250 km. Calculate its speed if it takes 24 . hours to revolve around the earth. (CBSE 2011)
Answer:

Download the free PDF of Chapter 8 Motion or save the solution images and take the print out to keep it handy for your exam preparation.

Hope given NCERT Solutions for Class 9 Science Chapter 8 are helpful to complete your science homework.