Question 3.
Calculate the number of electrons consisting one coulomb of charge. (CBSE 2015)
Answer:

Question 4.
Name a device that helps to maintain a potential difference across a conductor. (CBSE 2008)
Answer:
A cell or battery.

Question 6.
How much energy is given to each coulomb of charge passing through a 6 V battery ?
Answer:
Energy = Charge x Potential difference =1 C X 6 V = 6 J.

Question 8.
Will current flow more easily through a thick wire or a thin wire of the same material, when connected to the same source Why ?
Answer:
Area of cross-section

Question 9.
What change will occur with current through it ?
Answer:

Thus, current in the component becomes half of its former value.

Question 18.
Compute the heat generated while transferring 96000 coulomb of charge in one hour through a potential difference of 50 V. (CBSE 2012, 2013)
Answer:

∴ (d) is the correct answer.

Question 4.
Two conducting wires of the same material and of equal lengths and equal diameters are first connected in series and then parallel in an electric circuit. The ratio of heat produced in series and parallel combinations would be
(a) 1 :2
(b) 2 : 1
(c) 1 : 4
(d) 4 : 1.
Answer:

(c) is the correct answer.

Question 5.
How is voltmeter connected in circuit to measure the potential difference between two points ? (CBSE 2011, 2012)
Answer:

Question 6.
A copper wire has diameter 0.5 mm and resistivity of 1.6 x 10-8  Ω m. What will be the length of this wire to make its resistance 10 Ω ? How much does the resistance change if diameter is doubled ?
Answer:

When D is doubled and length remains the same, resistance becomes 1/4 th of the original resistance.

Question 7.
The values of current I flowing in a given resistor for the corresponding values of potential difference V across the resistor are given below :

Plot a graph between V and I and calculate the resistance of that resistor. (CBSE Sample Paper 2017-18)
Answer: Question 8.
When a 12 V battery is connected across an unknown resistance, there is a current of 2.5 mA in the circuit. Find the value of resistance of the resistor.
Answer:

Question 3.
A student prepared a circuit diagram to study the dependence of potential difference (V) on electric current (I) across a resistor.

Question 4.
Least count of a voltmeter and an ammeter in given figures would respectively be : (CBSE 2015)

Question 5.
To verify Ohm’s law, a student drew a circuit diagram which is given below :

Question 6.
In the Ohm’s law experiment, it is advised to take out the key from the plug when the observations are not being taken. Why it is essential l (CBSE 2015)
Answer:
Ohm’s law is valid only if the resistance of a resistor remains constant ‘during the experiment. If the key from the plug is not taken out when the observations are not taken, then the resistance of the resistor increases due to heat produced as a result of continuous flow of current through it. Hence, Ohm’s law cannot be verified.

Question 7.
The rest positions of the pointers of a milliammeter and volt-meter not in use are as shown in fig. A. When a student uses these in his experiment, the reading of pointers are in positions shown in fig. B. 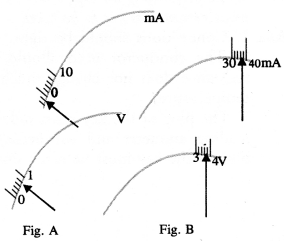 Question 8.
In an experiment to study the dependence of current on potential difference across a resistor, a student obtained a graph as shown

Calculate the value of resistance of the resistor. (CBSE 2015)
Answer: 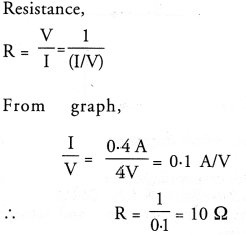 Question 10.
While performing an experiment to verify Ohm’s law, what precautions are to be taken ?
Answer:

Question 11.
In a given voltmeter, a student sees that the needle indicates 12 divisions in voltmeter while performing an experiment to verify Ohm s law. If voltmeter has 10 divisions between 0 and 1.0 V, then what is the value corresponding to 12 divisions ?
Answer:

Question 12.
The values of current I flowing in a given resistor for the corresponding values of potential difference V across the resistor are given below : 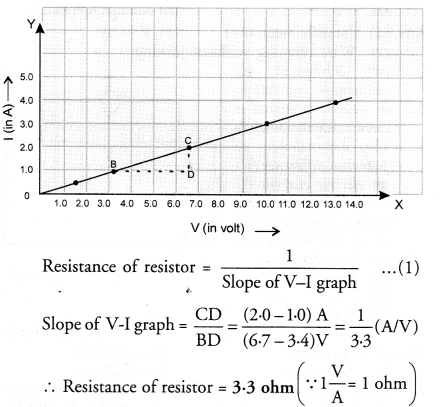 Download the free PDF of Chapter 12 Electricity or save the solution images and take the print out to keep it handy for your exam preparation.

Hope given NCERT Solutions for Class 10 Science Chapter 12 are helpful to complete your science homework.