Question 7.
Differentiate between an autotroph and a heterotroph.
Answer:

Question 9.
What would happen if green plants disappear from earth ?
Answer:
Herbivores will die of starvation followed by carnivores and then decomposers.

Question 12.
Match the words of column A with those of column B

Question 13.
Differentiate between an artery and a vein. (CCE 2013)
Answer:

Question 14.
What are the adaptations of leaf for photosynthesis ?
Answer:

Question 15.
Why is small intestine in herbivore longer than in carnivores ? (CCE 2013)
Answer:
Herbivorous diet has a large bulk. It is rich in cellulose. However, cellulose digesting enzymes are absent in them. For digestion
of cellulose, herbivores depend upon bacteria. The food has to be kept for longer period in the intestine for complete digestion of cellulose. Therefore, small intestine where bacterial digestion of cellulose occurs has to be long. There is no such requirement in carnivores as their diet has a smaller bulk which does not contain cellulose. They have a shorter intestine.

Question 16.
What will happen if mucus is not secreted by gastric glands ?
Answer:
Mucus protects the stomach from corrosion by HCl and pepsin of gastric juice. In the absence of mucus, the lining layer of stomach wall will be corroded forming gastric ulcers. There will be excessive acidity and extreme discomfort.

Question 19.
Why does absorption of digested food occur mainly in the small intestine ?
Answer:

Question 20.
Match the articles of columns A and B :

Question 21.
Why is the rate of breathing in aquatic organisms much faster than in terrestrial organisms ? (CCE 2011, 2012)
Answer:
Most of the aquatic organisms obtain oxygen from water. The amount of dissolved oxygen is quite small as compared to the amount of oxygen in air. Therefore, in order to obtain required oxygen from water, the aquatic animals like fishes have to breathe much faster as compared to the terrestrial organisms.

Question 23.
What is the advantage of having four chambered heart ? (CCE 2010)
Four chambered heart ensures complete separation of oxygenated and deoxygenated bloods. Only oxygenated blood is pumped out to supply all parts of the body. It is received by left auricle from lungs and pumped out by left ventricle. The blood returns to heart after deoxygenation. It is received by right auricle and pumped out by right ventricle to lungs for oxygenation. The mechanism is useful to animals with high energy needs (due to thermoregulation and higher activity) such as birds mammals.

Question 26.
Name the energy currency in the living organisms. When and where is it produced ?
Energy Currency. ATP (adenosine triphosphate) is the energy; currency of the living beings.
It is produced both during respiration (in all organisms) and photosynthesis (in plants only).

Question 27.
What is common amongst Cuscuta, Ticks and Leeches ?
Answer:
All are parasites which obtain their nutrition from their hosts direcdy without killing them.

Question 28.
Explain the role of mouth cavity in digestion of food.
Answer:

Question 29.
What are the functions of gastric glands present in the wall of stomach ? (CCE 2011)
Answer:
Gastric glands produce the following substances :

Question 30.
Match the items of columns A and B

Question 32.
Why do veins have thin walls as compared to arteries ?
Answer:
In arteries, blood flows under pressure so that their walls are thick and elastic. In veins the blood is Therefore, their walls are thin. Rather, they possess semilunar valves to check back flow of blood.

Question 36.
Why is transpiration important for plants ?
Answer:
Importance

Question 37.
How does leaves of plants help in excretion ? (CCE 2016)
Answer:
Waste materials produced in plant cells are stored ’in their vacuoles. In leaves, the waste materials are

Question 38.
Explain the process of nutrition in Amoeba.
Answer:

Question 39.
Describe the alimentary canal of man.
Answer:
Alimentary canal (L. alere-to nourish) is a tubular passage extending from mouth to anus through which food passes during its digestion and absorption. It is about 9 metres in length. Alimentary canal consists of mouth, buccal cavity, oesophagus, stomach, small intestine, large intestine and anus. 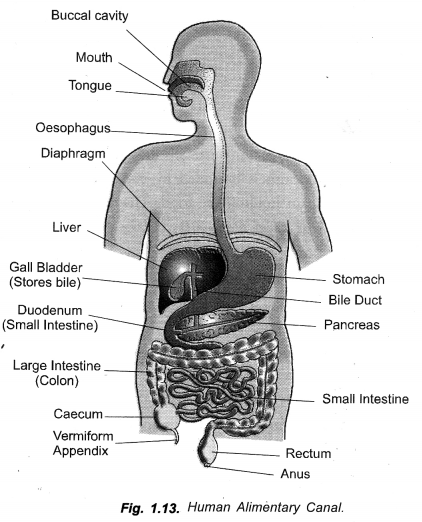 Question 40.
Explain the process of breathing in man.
Answer:
Breathing or the process of taking in fresh air and releasing foul air can be easily observed because thorax shows alternate expansion and contraction. It is involuntary though it can be prevented for a brief period. Rate of breathing is controlled by respiratory centre of brain. Expansion of thorax causes fresh air to be drawn in. Contraction of thorax causes foul air to be expelled. Therefore, breathing consists of two steps, inspiration and expiration.

Question 42.
Explain the mechanism of photosynthesis.
Answer:
Mechanism of Photosynthesis:
Photosynthesis is formation of organic food from carbon dioxide and water with the help of sunlight inside chlorophyll containing cells. Oxygen is produced as by-product.

Oxygen comes from water. Hydrogen of water is used to reduce carbon dioxide to form carbohydrate.

Actually, photosynthesis occurs in two steps, photochemical and biochemical.
1. Photochemical Phase (Light or Hill Reaction): The reactions of this phase are driven by light energy. They are of two types— photolysis of water and formation of assimilatory power.
(a) Photolysis of Water. Light energy splits up water into its components. Mn2+, CL and Ca2+ are required for this.

(b) Formation of Assimilatory Power: Light energy absorbed by chlorophyll molecules is used in synthesis of ATP and NADPH.
Both ATP and NADPH2 together form assimilatory power.

2. Biosynthetic Phase (Dark or Blackman’s Reaction). It is actually light independent reaction which can occur both in light as well as in dark. It requires the energy and reducing power contained in assimilatory power of light reaction. Common pathway of biosynthetic phase is Calvin cycle. Carbon dioxide combines with ribulose bisphosphate in the presence of enzyme ribulose biphosphate carboxylase or rubisco. It produces two molecules of phosphoglyceric acid (PGA).

3. In the presence of ATP, phosphoglyceric acid is reduced by NADPH2 to form glyceraldehyde phosphate (GAP).

4. A part of glyceraldehyde phosphate is changed into dihydroxyacetone phosphate. The two condense and form glucose. Ribulose biphosphate is regenerated to combine with carbon dioxide again. Glucose undergoes condensation to form reserve carbohydrate called starch.
5. Other inorganic Raw Materials: Synthesis of carbohydrates during photosynthesis is a mechanism to form food materials for body building and releasing energy. 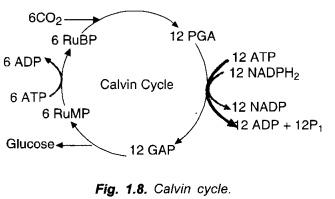 Plants also require a number of other inorganic raw materials or minerals from soil for building other, e.g., nitrogen, phosphorus, iron, sulphur, magnesium, etc. Nitrogen and sulphur are required for building proteins. Phosphorus is required for synthesis of nucleotides. Minerals are absorbed in the form of ions, e.g., NO2– and NH4+ for nitrogen. Some bacteria convert atmospheric nitrogen into compounds of nitrogen. Parts of them become available to plants.

Question 43.
Explain the three pathways of breakdown (respiration) in living organisms.
Answer:
(i) Aerobic Respiration:
It is a multistep complete oxidative breakdown of respiratory substrate into carbon dioxide and water with the help of oxygen acting as a terminal oxidant. Aerobic respiration is the usual mode of respiration in all higher organisms and most of the lower organisms. The reason is that it yields maximum amount of energy. The energy is stored in some 38 molecules of ATP. 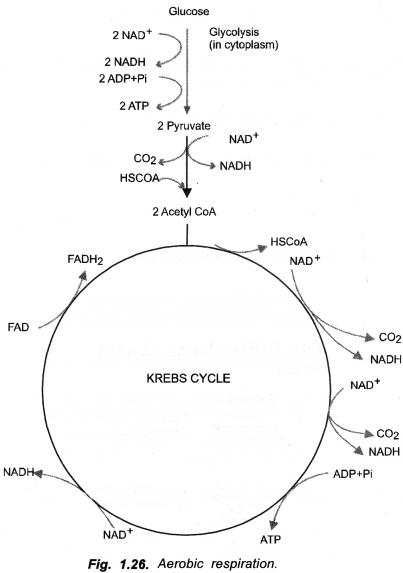 Glycolysis: Glycolysis or EMP (Embden, Meyerhof and Parnas) pathway is the first step of respiration which is common to both aerobic and anaerobic modes of respiration. It occurs in cytoplasm. Respiratory substrate is double phosphorylated before it undergoes lysis to produce 3-carbon compound, glyceraldehyde phosphate. NADH2 and ATP are produced when glyceraldehyde is changed to pyruvate. The net reaction of glycolysis is :

NADH2 and FADH2 liberate electrons and hydrogen ions. They are used in building up ATP molecules and activating oxygen molecules to combine with hydrogen for forming water. Synthesis of ATP from ADP and inorganic phosphate with the help of electron generated energy during oxidation of reduced coenzymes (NADH2, FADH2) is called oxidative phosphorylation. Water formed in respiration is called metabolic water. As oxygen is used at the end of Krebs cycle for combining with hydrogen, the process is called terminal oxidation.
The overall equation of aerobic respiration using glucose as substrate is

(ii) Anaerobic Respiration Producing Alcohol:
It is a multistep breakdown of respiratory substrate in which atleast one end product is organic and which does not employ oxygen as an oxidant. Anaerobic respiration occurs in many lower organisms, e.g., certain bacteria, yeast. In human body it occurs regularly in red blood cells and during heavy exercise in muscles (striated muscles). Anaerobic respiration occurs entirely in the cytoplasm. It has two steps. The first step is glycolysis. Here, respiratory substrate glucose breaks down into two molecules each of pyruvate, ATP and NADH2. Pyruvate is converted into ethyl alcohol (C2H5OH) in Yeast and certain bacteria. It is changed to lactic acid (CH3CHOH.COOH) in muscle cells when oxygen utilisation is faster than its availability as during vigorous exercise. It creates an oxygen debt in the body. No such debt occurs in blood corpuscles.

Question 44.
Describe the flow of blood through heart of human beings.
Answer:
It is passage of the same blood twice through the heart first on the right side, then on the left side in order to complete one cycle. Double circulation has two components, pulmonary circulation and systemic circulation. 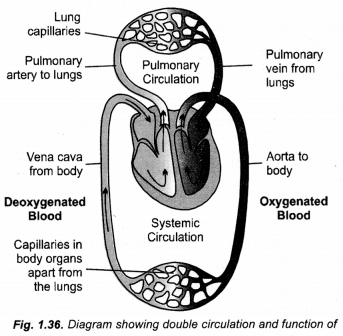