Question 3.
During the preparation of hydrogen chloride gas on a humid day, the gas is usually passed through the guard tube containing anhydrous calcium chloride. The role of anhydrous calcium chloride taken in the guard tube is to
(a) absorb the evolved gas
(b) moisten the gas
(c) absorb moisture from the gas
(d) absorb Cl– ions from the evolved gas
Answer:
(c). Anhydrous CaCl2 absorbs moisture to keep the gas in dry state. Otherwise, it will dissolve in moisture to form hydrochloric acid.

Question 7.
A sample of soil is mixed with water and allowed to settle. The clear supernatant solution turns the pH paper yellowish-orange. Which of the following would change the colour of this pH paper to greenish-blue ?
(a) Lemon juice
(b) Vinegar
(c) Common salt
(d) An antacid
Answer:
(d). The colour of the pH paper signifies that the solution is somewhat acidic. In order to change it to greenish-blue, we need an antacid.

Question 12.
One of the constituents of baking powder is sodium hydrogen carbonate. The other constituent is :
(a) hydrochloric acid
(b) tartaric acid
(c) acetic acid
(d) sulphuric acid
Answer:
(b). Tartaric acid is the other consument.

Question 13.
To protect tooth decay, we are advised to brush our teeth regularly. The nature of the tooth paste commonly used is
(a) acidic
(b) neutral
(c) basic
(d) corrosive
Answer:
(c). The basic ingredient in the paste will neutralise any acid released from the sugary’ items which we eat.

Question 17.
Which one of the following can be used as an acid- base indicator by a visually impared student ?
(a) Litmus
(b) Turmeric
(c) Vanilla essence
(d) Petunia leaves
Answer:
(c). Vanilla essence is an olfactory inidicator.

Question 19.
Which of the following is acidic in nature ?
(a) Lime juice
(b) Human blood
(c) Lime water
(d) Antacid
Answer:
(a). Lime juice is of acidic nature. It contains citric acid.

Question 20.
In an attempt to demonstrate electrical conductivity through an electrolyte, the apparatus set up is given. Which among the following statement(s) is(are) correct ? 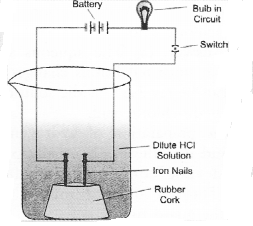 Question 21.
Which of the following is used for dissolution of gold ?
(a) Hydrochloric acid
(b) Sulphuric acid
(c) Nitric acid
(d) Aqua regia.
Answer:
(d). For the details of aqua regia.

Question 26.
Equal volumes of hydrochloric acid and sodium hydroxide solutions of same concentration are mixed and the pH of the resulting solution is checked with a pH paper. What would be the colour obtained ?

(a) Red
(b) Yellow
(c) Green
(d) Blue
Answer:
(c). pH paper will acqure green colour which indicates that the solution is of neutral nature.

Question 34.
Name the acid present in ant sting and give its chemical formula. Also give the common method to get relief from the discomfort caused by the ant sting.
Answer:
The acid present in ant sting is methanoic acid or formic acid. Its chemical formula is HCOOH. Being poisonous in nature, it causes pain and irritation. Even blisters may appear on the stung area. One should immediately rub the stung area with a mild base like baking soda (NaHCO3). It will react with formic acid to form salt and water. Its poisonous effect will be completely neutralised.

Remember : We should never apply sodium hydroxide pellets or solution directly or the affected portion. Being strongly corrosive in nature, it will aggrievate pain by forming more blisters. However, sodium hydrogen carbonate can be applied.

Question 36.
A student prepares solutions of (i) an acid and (ii) a base in two separate beakers. She forgets to label the solutions and litmus paper is not available in the laboratory. Since both the solutions are colourless, how will she distinguish between the two ?
Answer:
Phenolphthalein and methyl orange are also acid-base indicators. They can be used in place of litmus.
Procedure : Transfer a portion of the colourless solutions to two glass tubes. Add one or two drops of henolphthalein indicator to these. An acid solution will remain colourless while the solution of base will ecome pink. Now, repeat the experiment with methyl orange indicator. In acid solution, the indicator will become reddish while in base, it will be yellowish.

Question 37.
How would you distinguish between baking soda and washing soda upon heating ?
Answer:
Baking soda is sodium hydrogen carbonate (NaHCO3). Upon heating, it will evolve CO2 gas which upon passing through lime water, will make it milky.

Washing soda is sodium carbonate decahydrate (Na2CO3.10H2O). Upon heating, it will not evolve any gas.

Question 38.
Salt ‘A’ commonly used in bakery products on heating gets converted into another salt ‘B which itself is used for the removal of hardness of water and a gas ‘C’ is evolved. The gas ‘C’ when passed through lime water, turns it milky. Identify A, B and C.
Answer:
The salt ‘A’ is sodium hydrogen carbonate (baking soda) and is commonly used in bakeries as a constitutent of baking power. Upon heating, it changes to sodium carbonate ‘B’ and evolves carbon dioxide gas ‘C’.

Question 39.
In one of the industrial processes used for the manufacture of sodium hydroxide, a gas ‘X’ is formed as by-product. The gas ‘X’ reacts with lime water to give a compound ‘Y’ which is used as a bleaching agent in chemical industry. Identify ‘X’ and ‘Y’ giving the chemical equation of the reactions involved.
Answer:
Sodium hydroxide is manufactured by the electrolysis of a strong solution of sodium chloride (called brine). As a result, chlorine (X) is evolved at anode while hydrogen at cathode. Chlorine reacts with lime water containing slaked lime to form bleaching power (Y)

Question 40.
Fill in the missing data in the following table

Question 41.
What are strong and weak acids ? In the following list of acids, separate strong acids from weak acids.
Hydrochloric acid, citric acid, acetic acid, nitric acid, formic acid, sulphuric acid.
Answer:
For the definitions of strong and weak acids and bases,
An acid may be defined as a substance which releases one or more H+ ions in aqueous solution. These ions exist as hydronium (H2O+) ions.
A base may be defined as a substance capable of releasing one or more OH– ions in aqueous solution.
In general, mineral acids are strong acids while organic acids are weak. From the available list :
Strong acids : Hydrochloric acid, nitric acid, sulphuric acid.
Weak acids : Citric acid, acetic acid, formic acid.

Question 42.
When zinc metal is treated with a dilute solution of a strong acid, a gas is evolved which is utilised in the hydrogenation of oils. Name the gas evolved. Write the chemical equation of the reaction involved and also write a test to detect the gas formed.
Answer:
The gas evoloved is hydrogen. The gas burns brightly with a pop sound when a burning splinter is brought in its contact. This causes the hydrogenation of edible liquid oils to form solid fats also called Vanaspati ghee.

Question 43.
In the following schematic diagram for the preparation of hydrogen gas as shown in the figure, what would happen if following changes are made ? 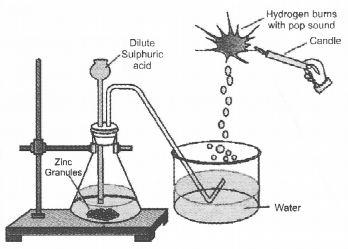 (a) In place of zinc granules, same amount of zinc dust is taken in the test tube
(b) Instead of dilute sulphuric acid, dilute hydrochloric acid is taken
(c) In place of zinc, copper turnings are taken
(d) Sodium hydroxide is taken in place of dilute sulphuric acid and the tube is heated.
Answer:
(a) Hydrogen gas would evolve at a greater speed because zinc dust provides more surface area as compared to zinc granules.
(b) Both would react in the same way. There would be no effect on the volume of the gas evolved.
(c) Copper does not react with either dilute HCl or dilute H2SO4. No gas would evolve in both the cases.
(d) Hydrogen gas would evolve in this case also.

(b) Baking soda can be converted to baking powder by adding appropriate amount of tartaric acid.
(c) Tartaric acid as pointed above will react with sodium carbonate which makes cake bitter. This means that the cake will not taste bitter.

Question 45.
A metal carbonate (X) on reacting with an acid gives a gas which when passed through a solution (Y) gives the carbonate back. On the other hand, a gas (G) that is obtained at anode during electrolysis of brine is passed on dry substance (Y). It gives a compound (Z), used for disinfecting drinking water. Identity X, Y, G and Z.
Answer:
The gas (G) obtained at anode during the electrolysis of brine is chlorine. The compound (Z) used for disinfecting drinking water is bleaching powder. It is formed on reacting chlorine with dry slaked lime i.e., Ca(OH)2. It is denoted as ‘Y’ This means that the metal carbonate ‘X’ is calcium carbonate. Upon heating, it evolves CO2 gas which gives back ‘X’ on reacting with calcium hydroxide. The chemical reactions involved are listed : 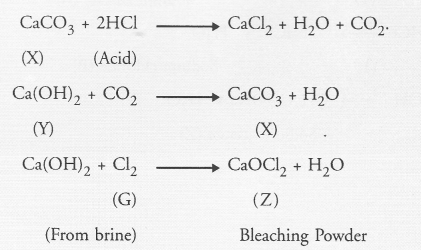 Question 46.
A dry pellet of a common base ‘B’, when kept in open absorbs moisture and turns sticky. The compound is also formed by chloralkali process. Identify ‘B’. What type of reaction occurs when B is treated with an acidic oxide ? Write a balanced chemical equation for one such solution.
Answer:
The available information suggests that the base ‘B’ is sodium hydroxide (NaOH). It is a deliquescent substance and becomes sticky on absorbing moisture from atmosphere. It is commercially formed by the electrolysis of a strong solution of sodium chloride (brine).
It reacts with an acidic oxide such as CO2 or SO, gas to form corresponding salt and water. For example,

Question 48.
Identify the compound ‘Y’ on the basis of the reactions given below. Also write the name and chemical formulae of A, B and C.

Answer:
The compound ‘Y’ is sodium hydroxide. It forms A, B and C as follows :

Hope given NCERT Exemplar Solutions for Class 10 Science Chapter 2 Acids, Bases and Salts are helpful to complete your science homework.