Question 1.
Which one of the following statements is correct regarding ‘sectional interest groups’?
(a) They promote collective rather than selective good.
(b) Their principal concern is betterment and well-being of their members, not society in general.
(c) They aim to help groups other than their own members.
(d) They do not seek to promote the interest of a particular section or group of society.

Question 2.
What was the main reason of Bolivia’s Water War? Choose the most appropriate answer from the following:
(a) Privatisation of water supply
(b) Irregular water supply
(c) Supply of poor quality water
(d) An increase in water price by four times.

Question 3.
Which one of the following political parties came to power in Bolivia in 2006?
(a) The Communist Party
(b) The Republican Party
(c) The Socialist Party
(d) The Conservative Party

Question 4.
Which one of the following was the main aim to start movement on April 2006, in Nepal?
(a) To control over government
(b) To snatch power from the king
(c) To restore democracy
(d) To dethrone the king

Question 5.
Which of the following is not a movement?
(a) Narmada Bachao Andolan
(b) Women’s Movement
(c) Struggle in Nepal
(d) All India Trade Union Congress

Question 6.
In 2006 the party that came to power in Bolivia was
(a) SPA —Seven Party Alliance
(b) Socialist Party
(c) Communist Party
(d) Nationalist Party

Question 9.
Pressure groups and movements have deepened democracy by
(a) putting pressure on the public
(b) countering undue influence of the government
(c) non-accommodation of conflicting interests
(d) controlling and sharing political power

Question 10.
In most cases the relationship between political parties and interest groups is
(a) direct
(b) not opposed to each other
(c) in dialogue and negotiation
(d) opposed yet in dialogue

Question 11.
Which of these is one of the agencies of organised politics?
(a) Political parties
(b) Pressure groups
(c) Movement groups
(d) All of the above

Question 12.
Which one of the following is not true about the pressure groups?
(a) They are directly engaged in party politics
(b) They take a political stance
(c) They organise protests
(d) They try to gain public support

Question 14.
Which financial agency/organisation pressurised the government to give up its control of municipal water supply?
(a) International Monetary Fund
(b) World Bank
(c) Central Bank of Bolivia
(d) None of these

Question 16.
Which of the following is a movement?
(a) Women’s movement
(b) Environmental movement
(c) Both a and b
(d) None of these

Question 17.
Which of the following is not a movement?
(a) Narmada Bachao Andolan
(b) Struggle in Nepal for democracy
(c) Women’s movement
(d) All India Trade Union Congress

Question 18.
Which political party supported the protest in Bolivia, came to power in Bolivia in 2006?
(a) Socialist Party
(b) Communist Party
(c) Congress Party of Bolivia
(d) None of above

Question 19.
Which of the following organisations/ institutions did not join the protest movement?
(a) Labour unions and their federations
(b) Organisation of indigenous people
(c) Organisation of teachers, lawyers and human rights groups
(d) Army

Question 1.
Look at the following cartoon takne from NCERT Textbook Page 62 and answer the question given below it. 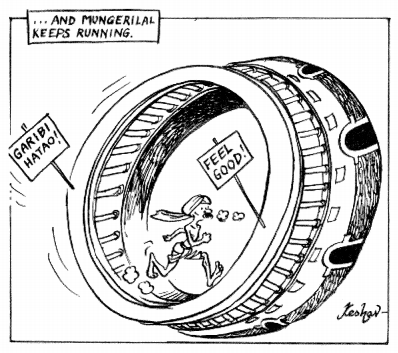 Governments initiate schemes and programmes to alleviate the suffering of the poor and meet their basic needs. But poverty remains in the country. What could be the reasons for such a situation?

Question 2.
Study the given news clippings from NCERT Textbook Page 63 and answer the question that follows: 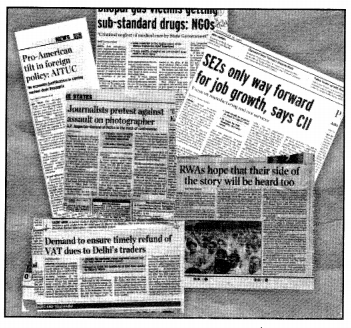 Can you identify the pressure groups functioning in the news clippings given here? What demand are they making?

We hope the given NCERT MCQ Questions for Class 10 Civics Chapter 5 Popular Struggles and Movements with Answers Pdf free download will help you. If you have any queries regarding Popular Struggles and Movements CBSE Class 10 Civics MCQs Multiple Choice Questions with Answers, drop a comment below and we will get back to you soon.