Question 2.
Family laws deal with
(a) marriage and divorce
(b) adoption
(c) inheritance
(d) all of the above

Question 3.
In India, the representation of women in legislature has been
(a) moderate
(b) high
(c) low
(d) very low

Question 4.
The system where father is the head of the family is called
(a) hierarchy
(b) matriarchy
(c) patriarchy
(d) monarchy

Question 6.
Which among the following statements about India’s Constitution is wrong? It
(a) prohibits discrimination on grounds of religion.
(b) gives official status to one religion.
(c) provides to all individuals freedom to profess any religion.
(d) ensures equality of citizens within religious communities.

Question 7.
When we speak of gender divisions, we usually refer to:
(a) Biological difference between men and women
(b) Unequal roles assigned by the society to men and women
(c) Unequal child sex ratio
(d) Absence of voting rights for women in democracies.

Question 8.
The distinguishing feature of communalism is:
(a) Followers of a particular religion must belong to one community.
(b) Communalism leads to the belief that people belonging to different religions can live as equal citizens within one nation.
(c) A communal mind does not lead to quest for political dominance of one’s own religious community.
(d) A secular constitution is sufficient combat communalism.

Question 10.
“A woman or a man who believes in equal rights and opportunities for men and women.” Select the correct option for the definition.
(a) Feminist
(b) Patriarchy
(c) Caste hierarchy
(d) Social change

Question 12.
In which of these categories of work do you think less time is spent by men?
(a) Household and related work
(b) Sleep, self-care, reading etc.
(c) Income-generating work
(d) Talking and gossiping

Question 14.
What is the result of political expression of gender division?
(a) Has helped to improve women’s role in public life
(b) Has provided a superior status to women
(c) The position remains the same, as it was
(d) None of the above

Question 15.
What is mean by the term ‘Feminist’?
(a) Having the qualities considered typical of women.
(b) A person who believes in equal rights and opportunities for women and men.
(c) The belief that men and women are equal.
(d) Men who look like women.

Question 16.
Which of these matters deal with the ‘Family Laws’?
(a) Marriage and divorce
(b) Adoption
(c) Inheritance
(d) All of these

Question 17.
Which of these is true about the most ugly form of communalism?
(a) Communal violence
(b) Riots
(c) Massacre
(d) All the above

Question 18.
What is leading to the breakdown of caste hierarchy?
(a) Large-scale urbanisation
(b) Growth of literacy and education
(c) Occupational mobility
(d) All of the above

Question 1.
Look at the following cartoon taken from the NCERT Textbook Page 53 and answer the question that follow: 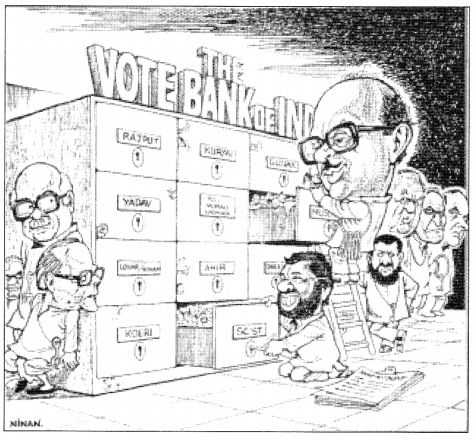 Question 2.
Do you think that political leaders are right to treat people belonging to a caste as ‘vote banks’?
Look at the following picture taken from the NCERT Textbook Page 54 and answer the question that follow:

What was aparthied? How was it oppressive for the blacks in South Africa?