The reaction to called addition reaction.

The family is known as alkenes. The hydrogenation reaction can be carried by heating a member of the family (e.g. ethene) with hydrogen in the presence of a catalyst like nickel (Ni) For example.

Ethene is an unsaturated hydrocarbon while ethane is of saturated nature.
Edible oils such as coconut oil, olive oil, peanut oil etc. contain atleast one

in their molecules. These are regarded as unsaturated compounds. Upon hydrogenation, these get converted into fats which no longer contain any

Question 3.
An organic compound A’ of molecular formula C2H6O on oxidation with dilute alkaline KMnO4 solution gives an acid ‘B’ with the same number of carbon atoms. Compound A’ is often used for sterilization of skin by doctors. Name the compound. Write the chemical equation involved in the formation of ‘B’ from A.
Answer:
The compound ‘B’ should contain a —COOH group as it is an acid. Since it has only two carbon atoms, the other carbon atom must represent CH3 group. Thus, compound ‘B’ is ethanoic acid (CH3COOH). The compound A used for the sterilization of skin by doctors is ethanol C2H5OH (C2H6O). The chemical reaction involved in the oxidation by dilute alkaline KMnO4 solution also called Baeyers reagent is :

Question 4.
A to F are the structural formulae of some organic compounds : 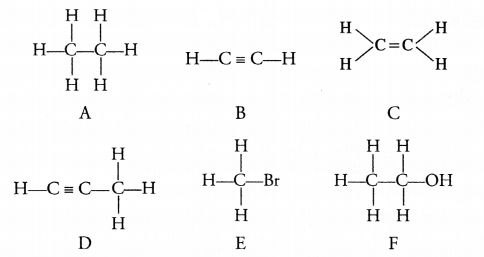 Question 5.
(a) A test tube contains a brown liquid in it. The colour of the liquid remains the same when methane is passed through it but it disappears when ethene is passed. Suggest the name of the liquid brown in colour. Give the chemical equation involved.
(b) The formula of an ester is C3H7COOC2H5. Write the formulae of the acid and alcohol from which the ester is prepared.
Answer:
(a) The brown liquid seems to be bromine dissolved in water. Methane (CH4) is a saturated hydrocarbon and does not react with bromine. Ethene (C2H4) being unsaturated in nature, decolourises bromine and its colour therefore, disappears.

(b) In an ester, the left side in the molecular formula containing C3H7CO is derived from the acid while the right side having OC2H5 is from the alcohol. This means that the acid and alcohol participating in the ester are C3H7COOH and C2H5OH respectively. The formation of ester may be shown as follows :

Hope given HOTS Questions for Class 10 Science Chapter 4 Carbon and Its Compounds helpful to you. If you have any doubts, please comment below. We try to provide online math tutoring for you.