1. Over 90 % hydrogen produced in industry is used for synthetic applications. One such process is Haber process which is used to synthesis ammonia in large scales. Ammonia is used for the manufacture of chemicals such as nitric acid, fertilizers and explosives.

2. It can be used to manufacture the industrial solvent, methanol from carbon monoxide using copper as catalyst.

3. Unsaturated fatty oils can be converted into saturated fats called Vanaspati (margarine) by the reduction reaction with Pt/H2.

4. In metallurgy, hydrogen can be used to reduce many metal oxides to metals at high temperatures.

5. Atomic hydrogen and oxy-hydrogen torches are used for cutting and welding.

6. Liquid hydrogen is used as a rocket fuel.

7. Hydrogen is also used in fuel cells for generating electrical energy. The reversible uptake of hydrogen in metals is also attractive for rechargeable metal hydride battery. 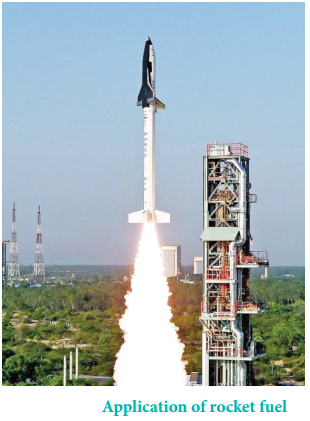 It is also used to make epoxyethane (ethylene oxide), used as antifreeze and to make polyester, and chloroethene, the precursor to PVC. Oxygen gas is used for oxy-acetylene welding and cutting of metals. A growing use is in the treatment of sewage and of effluent from industry.

Hydrogen use today is dominated by industry, namely: oil refining, ammonia production, methanol production and steel production. Virtually all of this hydrogen is supplied using fossil fuels, so there is significant potential for emissions reductions from clean hydrogen.

Use of hydrogen. Nearly all of the hydrogen consumed in the United States is used by industry for refining petroleum, treating metals, producing fertilizer, and processing foods.